This is the second part of a 2 part series. For the first part, click here

It took 40 minutes to hobble the 5 minute walk to the kiosk to get a day ticket for the bus. I'd be needing it. The doctors had told me to rest, but I'm travelling and I haven't got time to do that. Plus, resting a sprain doesn't help it long term. I know from experience.

Then I had a wander into a Croatian pharmacy, trying to find a tubi-grip to support it. Having to explain that one in English the staff would understand was fun. No, I don't want a bandage. OK, this elastic bandage will do. It's made by the Germans, can't be too bad.

Maybe going to walk around the city walls wasn't the best idea, but I only had a day, and I was going to make the most of it, ankle or no ankle. And no, the Dubrovnik city walls do not do discounts for the disabled. Yes, of course I tried playing that card. But I certainly showed people what it feels like when someone gets in the way of you.
Actually, quite a few people got in my way. Seriously, you better have a good excuse if a cripple is walking faster than you.

That's the problem with Dubrovnik. It's beautiful, it's incredibly impressive, but everyone knows about it. 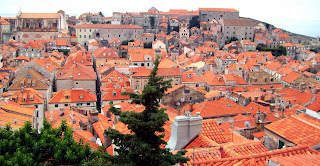 Because of this it's full of tourists, gets cruise-ship-loads on a regular basis clogging up the Old Town, and it's expensive, sometimes even by Western standards.
I couldn't wait to move on the next day actually, and so with the City Walls walked I went to the bus station to get a ticket for the bus to Kotor the next day. They were a bit miserable about it as well, and told me to go to window 3 to get tickets. The window that I tried to get tickets from, but that noone was sat on.

What time do you want to get the bus? 10am. There's no bus at 10am, 11am is the first one. But your timetable says there's one at 10am. The timetable that's right in front of me. That's wrong. Well, change it then?

I thought it would be about 10€ for the 2 hour journey, as would seem reasonable.

And I had to pay in kuna, in cash. 145 kuna was more than I had in my wallet from the original batch I'd taken out, so time to incur some more card fees for ATM withdrawals, because I can definitely afford them. Dubrovnik, please stop ripping me off?

So that all sorted, I went back to the hostel to grab some swimming shorts and a towel. Seemed like great weather to go for a dip, given that I'd sweated half my bodyweight walking the walls earlier that day. And of course, the sun went in at that point.

Back to the Old Town for a beer with Kevin and Anita. We went to Buza, the bar that's on the outside of the walls, on the rocks. You really pay for the location - 35 kuna for a 330ml bottle, which is nearly £4 - as in blooming expensive. But it was a great laugh, and we all got on incredibly well, and were all going to Kotor the next day. Great minds think alike, clearly. Beer's cheaper there too.
There was a bit of thunder and lightening, but we didn't think much of it. Left soon after, and it started dripping a bit, so I said my goodbyes and jumped on a bus.

Which was when it was tipping down with rain.

The others had to walk, the poor souls.

I have no idea how it goes from sunny to floods and streets-becoming-rivers so quickly, but apparently Dubrovnik has its own monsoons. Who knew.

Then I had to get off the bus. With a dodgy ankle. Great.

I sprinted up the road back to the hostel, not really caring about the ankle at this point. My shoes got soaked fairly early on when I stepped in a stream of water coming downhill, then I finally got undercover and looked like some sort of drowned rat. From all of 30 seconds in the rain.

The owner's son said I just can't help but get in trouble.

Probably true. Not normally the rain's fault though.
Posted by Anselm at 20:00