The end of civilisation

So I left Albania on the night bus - the first time I've been on one of these things, and I'm already not a fan.

I knew sleep might be hard to come by, so I chucked a sheet over myself and dozed off - at 7pm. Because that's how I roll. And I was right - every time the lights came on, every time we stopped in the middle of nowhere to let someone on the bus, I was awake.

Then the border came around. I do a good confused foreigner look at the best of times, but sometimes I outdo myself. So first, trying to find the toilet on the Albanian side. "Toilet?" "Toilet?" Eventually a border guard who spoke English bailed me out as I stood in a cafe, in my socks (?!) looking like a total moron. Then they said something in Albanian and laughed as I left. I smiled like the polite British idiot I am.

Then the Greek side. Everyone started to get off as they opened the hold. I thought I'd join them. I didn't have a clue what was going on, but I presumed they wanted to check the bags. But everyone was just standing there. So I tried to find someone who spoke English. No, no, no, oh, you do. Spoke it quite well actually, and he confirmed what I thought.

Then everyone got back on the bus. Oh, they've decided not to check the bags. At least I understood what was going on now.

At some point, I'll actually learn the language of the country I'm going to.

Though "customs are checking the bags" is fairly advanced Albanian.

Or maybe it's basic Albanian, but fairly advanced English, if you get my drift.

And having sat at the Greek border for an age, everyone got off the bus again.

I sat like a confused foreigner again. My new English-speaking friend helped me out.

"My friend, you must come to the front of the queue. You go first, you are from a foreign country."

Actually, I think it's because I'm an EU citizen entering an EU country so I don't need to be stamped in, but yeah, we'll go with that. Foreigner privileges for the confused foreigner. It's not quite the autographs and photos I get in India (yes, genuinely), but it'll do. And they're disturbing my sleep, so it's the best they can do.

And one of the Albanians who I tried to get some English out of, but couldn't, gave me a couple of biscuits because I was British. Albanian hospitality, I love it. Some of the friendliest people in the world as a whole.

Anyway, enough of the sucking up to Albania for now.

We were into Greece.

And we got into Athens at 5:30am. Well, 6:30am, as I found out to my great bemusement when I went into the metro station to work out how on earth to get to the hostel. Timezones are great fun.

Nearly as fun as when you get out of the metro then don't have a clue where to go, so you just guess and end up walking down some back alley with graffiti everywhere, people sleeping in the streets and the pungent smell of urine. It was only when I got my compass out (yes, I'm that cool), that I finally twigged that maybe this wasn't where I wanted to be. I still don't do mornings.
Eventually I had the brainwave of maybe looking at a map rather than just wandering aimlessly (if only I did that more) and found the place. The sun still hadn't come up, so I thought I might be able to see sunrise over the Acropolis from the roof terrace (this would have been possible, and I'm not lying, just making you jealous). The receptionist said I could dump my pack in the basement and get on with it, or just rest in the common room. I still hadn't had breakfast or coffee so it took me far too long to make any sort of decision, but I (in hindsight, sensibly) chose the common room.

And I crashed out on the sofa, and missed the sunrise entirely.

But places were actually open for breakfast by then.

Some of them were charging 10€ though. When your country has 30% unemployment and major economic and social problems, and there are protests outside Parliament every day because of it, then this doesn't make sense.

It's all part of my theory about the euro though: countries who adopt it seem to have prices that are a good 20% higher than they should be, or higher than their neighbours. I saw this in Slovakia, I saw this in Montenegro, and it happened in France when they dropped the franc as well.

And that's before I start ranting about how stupid an idea the euro is: locking countries like Greece into a currency highly inappropriate for them, where they aren't competitive and don't have the required tools of adjustment in times of trouble. The way out is either to drop the euro, return to the drachma and devalue; or to reduce both prices and wages in order to become competitive again. And we know the second option just isn't practically possible.

Anyway, enough of the politics.

Oh yes, the Acropolis.
So had I stayed awake, maybe I could have made it in at 8am when it opened and avoided the masses of tourists.

Maybe I shouldn't have gone in at 11am when the place was full of people following umbrellas, the contents of about 6 cruise ships and more stereotypes than I thought existed. They even employ people to stand there with a whistle, blowing it when some fool decides that stopping in the middle of a mass of people to take a picture that's probably on Google Images already, holding EVERYONE up in the process, is a good idea.
I'm normally too British to queue jump, but I figured that if I could climb up the rocks with half an ankle then it was fair game. And I wasn't following an umbrella or a giant number like a sheep either.

The place itself was packed, and slightly spoilt by the totally stereotypical American tourist. I mean, take all the things you think of when I say "American tourist", and you'd have found them here. And more. I overheard more cringeworthy statements than I ever wanted to. But I forgot to write them down as I heard them.

I'll never make it as a travel journalist. Oh well, I might have to get a real job.

While we're on that subject: this post is quite hilarious.

And they wonder why they get bad rap. Luckily I've met plenty of decent Americans on this trip.

Also, to the cruise ship "Independence of the Seas". That is not an appropriate name for a CRUISE SHIP. I might have to get the Sales of Goods Act out on you for that one.

Especially when everyone on your ship wears a cap with "Independence of the Seas" on it around the Acropolis. It just looks ridiculous.
How ironic that the place where civilisation began now resembles the end of civilisation, some theme park for halfwits?

So I escaped and had some lunch. Yes, octopus sounds good. No, I expect more than that for what I just paid. Oh wait, this is Greece, so I should assume I actually paid half of what I did. OK, maybe I can just about let you off.
Nap time.

3pm and I thought I'd have a look round the Ancient Agora for a bit - basically more ruins, but still with a lot of history. No, it shuts at 3pm. Because this is Greece and they can't afford to pay people to stand around doing nothing for another couple of hours.
So I thought I'd post the souvenir I bought in Albania back - carrying it round the world didn't sound like the most fun thing ever, and knowing my luck Australian customs wouldn't let me take it in. I was going to post it back from Albania but then figured that posting it from an EU country might be cheaper.

After locating the post office and failing to locate a cardboard box, I headed back to the hostel to pack it all up. The receptionist had an empty phone box, but at this stage any cardboard would do. So out came the swiss army knife and the duct tape and a makeshift package was made. In went the stone carving and all the postcards I've picked up so far that are currently pushing my plastic folder out of shape. On went the address and some generic "Caution - Fragile" writing that the Greeks will definitely ignore.

I thought queues were bad in Britain. But I sat in the post office for well over 40 minutes while the 2 cashiers tried to process everything. 2 windows open out of 15. I take back my criticisms of the British system.

Eventually up to the window. It was just over a kilogram. That'll be 14 euros please. WHAT?! That's more than I paid for the bloody stone carving in the first place. But this is Greece, and everything costs too much. And they didn't even take card. Not fun when you have to pay to withdraw from an ATM.

Overpriced services - this, Russian visas, bus tickets in Dubrovnik - and they all require cash payment (well, postal order in the case of Russian visas, but that's a cash payment and has an additional fee on it). Which requires that I pay £1 a time to withdraw MORE money than I budgeted from an ATM.

Should have just sent it from Albania.

So I had some souvlaki to keep me going. Souvlaki is just a nice way of saying kebab, so it's still in keeping with my staple diet. But this is Greece, so they're blooming good. Tzatziki (the sauce it comes with) is also my new favourite thing.

The Acropolis looks good at night too - they light it up. And I could see it from the roof of the hostel. And as I walked up there I walked in on some Ukrainians taking a photo, so they asked me if I wanted to join them. OK then. Just met you, don't even know your name, but I want a photo with you. That's travelling for you, and it's pretty cool to be fair.
They were from AIESEC, which seemed to be taking over the place (they had some conference or something). And I met a guy who I coached last year at Warwick, which was incredibly random.

And I broke my sunglasses. Snapped them clean by walking into a low ceiling. Smooth. They lasted all of 3 weeks.

So I had some ouzo to cheer myself up.

Second day there and I finally made it to Agora, but I wasn't missing out on much. Given that I'd blagged a free ticket with my expired student ID I shouldn't complain too much though!
So souvlaki eaten and hill climbed, I realised that Athens was massive but also too expensive, and too touristy. Apart from the hill I climbed, which apparently noone knew about. The trees needed trimming so I could actually get a good shot of the Acropolis though!

Once I'd had a wander of the local district, and seen the various bits of street art, people sleeping on the streets and suchlike, I was even more annoyed at how overpriced the place was. Time to leave. 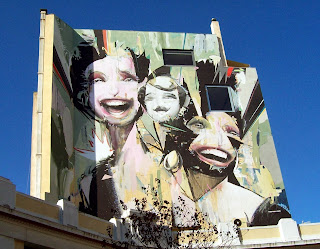 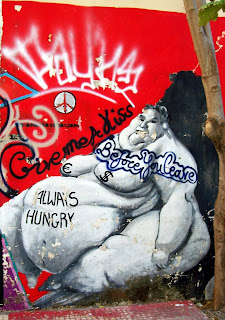 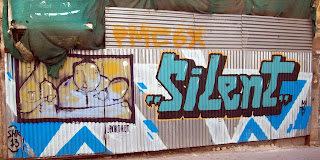 On to the metro to the port at Piraeus, and the final leg of the journey to Istanbul had begun.

Maybe I'll actually make it to Australia eventually.
Posted by Anselm at 21:32