The long journey to the forbidden land

That's just a selection of the things people say when I mention I'm going to Albania.

It's the general attitude of people towards the place - that it's some sort of dangerous, forbidden land, where the unthinkable happens. Even in neighbouring countries like Montenegro, this attitude pervades all rational thinking. People refuse to visit the place and see if it's actually how they've been told to think about it.

Which makes the journey in a difficult affair.

Trying to find somewhere close enough to the border to stay was the first difficulty. You can only get in on a bus from Ulcinj, in the far south of Montenegro, and they go at either 6am or 12:30pm. So 12:30pm.

Which meant staying in either Bar, 30 minutes down the coast, in a private room for 16€ a night, or in the capital Podgorica, a drab concrete affair 90 minutes away, in a dorm for 10€.

I splashed out and went for Bar.

Just getting into the place was proving a job in itself, such are the misconceptions surrounding it.

So off down the coast it was. The bus only cost 7€ and it was immediately apparent why; the bus seemed to be from about 1960 and made a lot of noise about doing anything. And went very slowly and held everything up. At least we wouldn't be doing any dodgy overtaking, or in fact any overtaking at all.

At least the windows opened so I could take decent photos.

The driver still charged a euro to put the bag underneath (didn't get away with putting it on the seat next to me, even if the bus had about 5 people on). The little luggage tickets (that noone pays attention to anyway - they just chuck all the bags out at the final destination) said it was 50 cents for a bag in the hold.

This really confused the French half of the French/Australian couple who I travelled down there with and who I still don't know the names of, or whether they are indeed a couple, but we'll go with that. I'm travelling and it regularly gets to the stage where it's too late to ask these things.

But I always know where they're from. It's always acceptable to ask that. Or just guess from the accent. 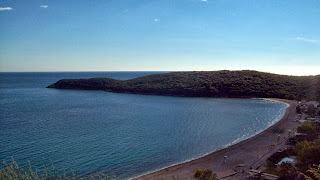 So off down the coast we go, and Montenegro really is a beautiful country, certainly on the coast. Bits of it are being concreted over but they need to slow down and put some planning regulations in so it actually looks nice and doesn't spoil the coast. I'm not big on regulations but I just hate people chucking concrete everywhere! Do we regret the nice old towns on the coast? No. Do we regret 60s architecture? Yes. Point proven, thank you.
Bits are really unspoilt too. And I really hope I'm not responsible for some developer seeing these photos and just concreting it all over. That would be far too ironic for my liking.

Then we came round a corner and in came the jewel of Montenegro, the photo always on the tourism adverts, Sveti Stefan. 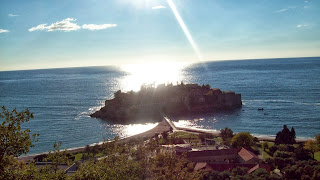 But it was the afternoon and so the sun was behind it. What a shame.

One day I'll have enough money to go. Maybe.

Montenegro's another country I want to come back and visit - more of the inland areas which I hear are incredible. And before the tour bus crowds discover it and turn it into a new Dubrovnik. In fact I'd like to go around the whole of the Balkans more thoroughly. This was the bit of the trip I was most excited about and it's lived up to expectations so far.

On to Bar and the guesthouse did free pickup. So I tried to get my cheap Nokia working and use up the credit on the O2 sim I had to get to buy it. No, wouldn't let me. So, feeling like a drug dealer, I got the Blackberry out and it actually worked better than another phone. You what? Called up the owner and off we were.

By this point I was hungry (even though I actually took snacks for the journey) and into Bar we all went. The sunset was lovely wandering down the coast, but I obviously forgot to take my camera, and Blackberries don't do good photos. £10 Nokias don't have cameras at all.

Then the sun disappeared behind the horizon, I was in shorts and t-shirt and the supermarket was still a good walk away. But I'm Welsh and I don't feel the cold.

Bar doesn't have a lot - just a nice beach, and they're building some sort of Orthodox cathedral that's still very concrete but it's still built in classic style, dome and everything, which is refreshing given the usual dash to squares of concrete. And a Catholic church is unfinished too, and that looks quite nice. Guess they're just trying to keep up with each other. And Stari Bar, the old town, is also nice, but I never made it up there.

Nice enough as a stopover though.

So on to Ulcinj the next morning, and the bus only cost 2€50. Now we're talking. And they didn't charge me to put my bag in the hold! Ryanair buses no more.

I went to book a bus into Albania, the only one, but first I had to work out how to pronounce "Shkoder", or "Shkrodra", or "Shkodra", or whatever the hell they feel like calling it today. Luckily John, the Australian guy I met in front of me, also had that problem. He was refreshed that someone else spoke English and we were both happy to have company.

But this bus went all the way to Tirana apparently. Sounds good, I'll go there then. Much hand-waving later to help her out and she actually spoke English and the ticket was 9€. Cool, let's do that.

Fun fact: John grew a beard for a year so he could get into Pakistan and not get killed while he was there. The Pakistanis took too long issuing his visa, so he isn't actually going there. But he won't shave the beard, because it took so long to grow.

Heading out of Ulcinj and it felt like a different world already. Rustic farmhouses, people working the fields, awful roads - but still the awesome gorges and mountain scenery that is just so great about this bit of the world. It was a Friday but the bus was still fairly empty as well - the "don't go to Albania" crowd are winning apparently.
Albanian border control took ages, but I didn't even get a stamp in my passport! Not impressed. I'll be asking them for an exit stamp on the way out. Took so long that John went to take a photo of the Albanian flag outside, which he loved (it is quite awesome) and then got shouted at by the Albanian border guards. 30 years ago that would have got you shot, not shouted at, but viva la change eh?

Albania, Albania. Minarets and an impressive castle by Shkroder are just symbols of how different this country is. It is SO different. It's almost Middle Eastern - the people look that way, it's Islamic (in culture at least), lots of little roadside stalls (which is more of a developing country thing, but I digress) and yes, it's just a bit different. A last Ottoman outpost maybe. They're definitely moving towards the West though, so it's only a matter of time before it's spoilt by tour buses and the types of tourism that I hate the most. If they can stop crying about how dangerous it apparently is, that is.

People are so friendly. And genuinely so. They talk, they help you out, they're genuinely interested in you.

Oh, and Albanian girls are hot. Minor point. I apologise but I'm male.

But yes, into Shkroder and no it's not a direct bus to Tirana, but we're carted on to the Albanian minibus peculiarity they call the furgon. It's basically a big shared taxi/bus affair that runs when it fills up, but is a lot quicker than the bus and not much more expensive. They pack you in though - they even have a stool for an extra passenger. Genuinely.

This one wandered round for a bit to look for more passengers and finally filled up, including with a budgie in a cage. Now this is the real Albania.
The roads weren't in great condition, but the driver overtook anyone and everyone, and wasn't waiting for anything, unless he could either slow down to pick up a passenger or drop someone off on the side of a motorway, or if he was on the phone.

We went into a petrol station and then tried to pull out. No, constant stream of traffic. No problem, we'll just use the other side of the road as an acceleration lane. As in the lane that oncoming traffic use. But this is Albania, so this is normal. Reminded me of Indian driving a bit. Ah developing countries.

They use their horn for everything too.

And wiggle their heads.

It's not really European here.

I had a bit of a culture shock in the furgon, but I'd pretty much got used to it by the time I was out. Weirdly the Arabian music helped me get in the mood for the place: strange what a soundtrack can do.

People do stare at us tourists though, especially when I'm walking around in shorts. They say "Hello, how are you" as well - they're friendly enough - but I imagine it's disconcerting if you haven't experienced it before.

The furgon dropped us off a good 15 minute walk from Skanderberg Square, not on the Square as the guy who sat next to us had informed us. Many times. I'm fairly sure that every time he spoke and we were in firing line we became slightly more intoxicated though. Maybe he didn't know really.

Yes, Tirana doesn't have a central bus station. They just drop you off and pick you up wherever all the minibuses are assembling this week. And the location genuinely can change every week. All that concrete and no central bus station. Communism wasn't that good, was it?

But this is Albania.

It's not unsafe though - actually precisely the opposite. I feel safer here than in most of the other places I've been. It's just the Albanian hospitality I think - they go out of their way to help us out.

I could tell that from being in the country a couple of hours.

The people warning me off it have clearly never been there.

The photos in this post were taken from moving buses so aren't of brilliant quality, especially if you zoom in. That's what Google Images is for I suppose
Posted by Anselm at 19:28