The journey in from Bratislava was alright. River Danube flanked by mountains with the sun setting behind it. I faced the major first world problems of trees by the lines and dirty windows obscuring any photos I took, but you should get the picture, be very jealous and about to unfriend me:
It wasn't quite 3 hours, but still that was nothing compared to the German guy sat opposite me who'd got on at Dresden and had been on the train for 10 hours. And then he got befriended by a small child who gave him an apple. I tried to join in by throwing a few German words in, the end result being only that the kid thought I was a German with a bit of a lisp.
We rolled into Budapest-Keleti station a bit late - but it was trying to negotiate the permanent construction site out the front that was the biggest challenge. It meant that the trolleybus went from some backstreet, which I located fairly soon (strangely, I saw a trolleybus and walked towards it - logic level: expert) and the bus was waiting and about to leave. But I had no forints so I had to find a cash machine. This involved traipsing back to where I started. With a heavy pack on my back. And feet that were falling apart. Great fun. Character building maybe.
20 minutes later I'd finally got back to the stop, having gone to get a kebab (my staple food these days) but then decided against it. Wise decision in the end that one. Got on the bus, asked the driver if it was going to the stop I wanted, confused him by mispronouncing it then asked him how much it cost.

Just get on, he gestured.

Whether he was letting me on for free or if he just didn't understand what the heck I was on about is an open question, but it was most likely the latter.

At least I was a forint millionaire - you get 350 of them to the pound.

Then I got off.

It was apparently an "easy 2 minutes walk" to the hostel from here.

But I didn't have a clue where I was going.
So I wandered, as I do. Eventually I had the brainwave to go into a metro station and look at a map. Should have learnt from the Bratislava incident that maps are useful, but as if I learn from my errors.

It was just around the corner from the bus stop. But I was no longer by the bus stop. So I lugged my pack for what felt like a mile to the hostel, which was a really cozy and casual affair, but I liked it. Properly friendly.

And they took me out with them to some Hungarian buffet, which cost the equivalent of 4€ and had large quantities of meat, which made me decide that I liked Budapest. Beer was cheap too. But I was too full to drink any.

And I slept in until 11am the next day. Several early mornings does that to me, because I don't do normal person time. So I went to some place called Kiado for breakfast/lunch, and had some bloody good goulash. But it's soup around here, not the meat + gravy + dumplings affair that the Czechs do. Shame, I never drink soup.
So I wandered the Pest side of the river (yes, Budapest is actually two cities, one called Buda and one called Pest - and I'm not even making it up) before I decided that it was far too warm for walking (major first world problem) and that wearing just a t-shirt didn't negate that. Even the excitement of being stopped by the police around the back of Parliament as someone's motorcade in didn't do anything. So I bought a 24 hour pass for about a fiver, and my feet thanked me a lot.

It was already 4pm by this point, so it would cover me for most of the next day too. And given that Buda has a million hills, that would be no bad thing.

It covered the riverboat too. Cheap boat trip on the Danube? Yes please! Apart from the fact that it was getting dark and a bit cold, and therefore I could have just walked anyway. Oh well, my feet will thank me.

The second day I was back to Kiado and actually in time for breakfast this time. 1000 forints lighter and a hearty breakfast later, I was ready to conquer Buda. And the sun had hidden itself away, which was handy since I had a few hills to climb. Despite the fact that the dullness made the photos a little awful, I still took 300 photos in Budapest - about a third of the total so far. The place looks nice. And I take far too many photos. But even the Soviet tower blocks look alright here - weird what a lick of paint and orange roof tiles will do.

I was still too lazy to walk up Castle Hill, so I took the funicular instead, thinking it would be a decent view, experience, etc, yadda yadda. No, standard tourist trap. No different to any other funicular. And it was 300 forint more than I thought it would be. My advice: just take the bus up - it's a third of the cost.

Or if you're less lazy than me, walk.

That said, I arrived at the top as they were changing the guard, and going through some weird procession with their rifles and other such things, before they returned to pretending to not move for another hour or so.

And so I went for a wander around Castle Hill, and eventually my beloved tour groups were nowhere to be seen. What a shame. Then my feet were reintroduced to cobbled streets, and it's safe to say that they aren't friends. At the bottom, I tried to get on a tram at the end of its line. I was wanting to travel west. The tram only went east, and this was the end of its line. I truly am an idiot abroad sometimes.

Eventually I made it to the bottom of the Citadel hill, which I was going to climb up, because the road didn't go right to the top. So I climbed.

And found some slides, which I was definitely not too old to slide down. Got some funny looks off the Hungarians for that. 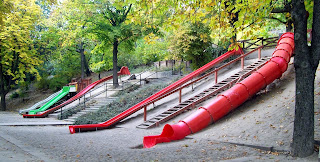 And eventually, got to the top.

What a view.
And I didn't even care that actually, there was a road to the top, and that there were a million tour buses playing around. I just bought an overpriced ice cream and celebrated my climb. 235 metres of it, according to Wikipedia, so that may or may not be correct.

I wish I'd had a couple more days in Budapest actually - could have gone caving under the city, and down to the Memento Park full of Soviet statues (my kind of thing!), or out of the city a bit - but it's on southwards and on to Belgrade. 8€ night train, wish me luck.
Posted by Anselm at 18:09