Welcome to the East

This is a bit of a long one, sorry.... you'll enjoy it though, I promise

So I stayed up far too late last night and then the morning was interesting. I really bonded with the guys in my dorm in Berlin and we were up until about 3 or 4am drinking cheap German beer (still better than Carlsberg though!) - it was a shame to leave them in the end. Never got to say a proper goodbye either, as I fell asleep early in the knowledge I had a 9:30am train to catch, then woke up well before anyone else.
Apart from the guy who was normally in the bunk below me, who was actually spooning a girl in another bed. I must have woken him up (or maybe it was just the fact that 2 people most certainly do not fit in a dorm bed!) but we actually got to say our goodbyes. Why don't people get it - you cannot fit 2 people in a hostel bed?!

So off to the Hauptbanhof. I'd found a tram line that went from just south of the hostel at Hallesches Tor direct to the station, so headed off that way. It was Independence Day too, so instead of cheap food from Lidl (which was shut) I had to settle for some cafe and much hand-waving as I spoke about 3 words of German and she spoke very little English. And I got 2 breakfast baguettes instead of one, which actually turned out to be a blessing in disguise...
I went to where I thought the tram stop was, and noticed a slight issue: there were no tram lines. This was a bus stop. Not a tram stop. And the bus/tram/guy pushing a wheelbarrow of people to the station was meant to come at 08:47. It was 08:48. And Germany is super-efficient, of course. But no need to ponder my options, as the bus was indeed a minute late - quelle horreur! The driver took mercy on my attempt to throw some words of German at him and spoke better English than me - a one-way ticket to central station yes? That's 1€50 please. Have a nice day! And then I nearly killed a German with my pack. I still don't know what "sorry" is in German, so I just threw the few German words I knew at her. She laughed, probably at my poor attempt to apologise.

So on to the train station. Half of Poland seemed to be standing on the platform, but I had a reservation. 4€ I'm sure I can live without. In the end there were only 2 in my carriage, and I have no idea what language she spoke to me when she came in but I just said my seat number in English for some reason. Because she couldn't tell by looking at the number of the seat that I was sitting in, of course. And that is why I needed to sleep on this train.

Then we pulled into the Ostbanhof. On got 2 Polish kids and their mother. I was not sleeping on this train.

The kids were actually fairly quiet for the first hour or so. But this train was over 5 hours. Their silence was broken in the way that breaks every child's silence - a small dog came on the train. Her name was Wendy, and I know that my man card will be revoked for using this word, but she was kind of cute. She liked shaking peoples' hands with her paw, and caused much hilarity in our carriage. When I got my second breakfast roll out to eat (I was hungry!) then she suddenly became very hungry. This was highly hilarious. 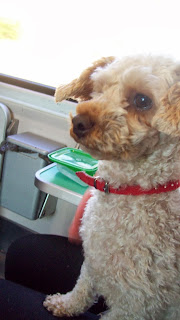 But dog and owner had to leave at Poznan, so it was just 2 excitable children, their mother and me.


At some point they realised that I spoke English, so decided to befriend me by counting to 10 in English. I tried to carry on with 11, 12, 13... but they just looked at me confused. That must be taught at age 8. And then they started teaching me Polish. Including the word for hug, which they demonstrated with much noise and to great embarrassment of their mother. I'm fairly sure if I was my age and female, I would have been a little bit broody.
I actually managed to get an hour's sleep on that train as well. When I woke up the poor kids looked so confused. But we were nearly into Warsaw now. It got bombed in the war, so there was a lot of concrete, many Soviet tower blocks and a lot of old trains. At least there wasn't any Cyrillic. And there were some nice-looking buildings that obviously weren't obliterated in the 1940s. This was unquestionably the East.

And then we pulled into the station, a drab, concrete, underground Soviet-era affair, and the escalator didn't work. So I lugged my pack upstairs. Welcome to the East, Anselm. 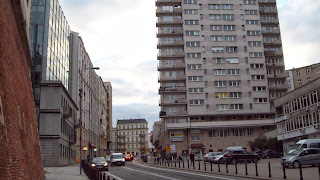 Then on to a Polish tram. I had no zloty to pay for it, so I just got on. It was almost certainly at twice capacity, and this was at half 3. So after nearly killing a Pole with my pack (and I speak even less Polish than German), I went down the line for 3 stops, as I'd worked out beforehand. And then I went in the direction I thought. And got lost. Restaurants were dirt cheap though on the Nowy Splat or what ever it was called. Or at half 3 they were anyway.

Eventually I found the hostel, tried to get in, but was bailed out by the receptionist eventually. It must have been half 4. Luckily there was a bank across the road to get some zloty from, and I could actually pay the 25 zloty I owed for the hostel.

Then I collapsed on to a sofa. My attempt to find someone to go for dinner with was in vain - this was the unfriendliest hostel I'd stayed in so far. Though I did speak to a Bangladeshi called Shomon who exports garments from Dhaka in Bangladesh. He said I should visit when I'm in Calcutta in December. We'll see if I need any new clothes for Oz. This was after he joked that "the Far East" was one country. Didn't quite have the heart to remind him that British India was split in 1948, but there we go. That said, such a retort would probably do the Polish sense of humour a good bit of justice - it's pretty clever like that!
So I wandered up to the Old Town, which apparently had cheap restaurants and cheap beer. And took some photos under some grey clouds, which really did the Square no justice at all, especially given that it was rebuilt after the war at great pains. No, the Old Town was more expensive. It was the touristy bit - I should have realised. 6 zloty beer was proving particularly elusive. And it was getting later and later, so prices were up. Doubled.

Walking into a restaurant and getting a table for 1 is fairly tragic, so I quickly ate my dumplings (yeah, let's be even more stereotypical about the East), paid the 16 zloty I owed and got out of there. Back to the hostel via some cheap Polish supermarket, where I again forgot the Polish word for "thankyou" and must have come across as rude. I'm not a linguist, but I got a load of meat and a beer for less than £2, so all was good. After a Polish guy shouted at me for what I worked out was for taking his second carrier bag. Which he'd put in his first carrier bag. I again made the mistake of not eating for 8 hours in the middle of the day when restaurants are at their cheapest. At some point I'll learn.

And Polish chocolate is disgusting. Or maybe that's just cheap Polish chocolate. But the hostel was incredibly antisocial, so I just watched the handball champions league highlights, checked my emails and went to bed. At 9pm. I'm such an old man.

It all left me kind of wishing I'd gone to Wroclaw instead. A fairly undiscovered town that's similar to Krakow apparently, and with a direct train from Berlin at about the same time. But that was probably just the dull weather, the overcrowded public transport and the antisocial hostel. And my inability to speak Polish would be an issue anywhere.
Posted by Anselm at 20:00