And now I'm actually travelling south like I'm meant to

So I woke up the next morning and it was sunny outside. And the sun was in the perfect position for some nice photos of the Old Town Square. But I didn't have time - I'd spent too long abusing the cheap breakfast in the hostel and had to get to the station so I could get to Krakow. I'd decided the day before that I wanted to just get out of Warsaw - maybe just bad first impressions and a rushed decisions, but I'm a stubborn and decisive kind of guy (why else would I do such a crazy trip like this?) I'll just have to Photoshop the other pictures. Shame really.
Got on to a crowded Polish bus (what isn't crowded here?) and went for a stop before being pretty much pushed off - having a pack on my back is like being morbidly obese when you're right by the door. But thankfully this was where I needed to change for the tram. And of course I tried to walk to totally the wrong place, and then had to sprint across a busy Polish roundabout to the correct place in a scene that wouldn't have been out of place in an episode of Benny Hill.

And so I got off a stop early to have a look at the Soviet palace, which also had a tourist office in so I could get the obligatory postcard. And the sun made it look pretty good, even if it was nearly identical to the Seven Sisters in Moscow. Yes, in Soviet Russia, buildings are related. I wonder what Stalin would make of my awful Soviet Russia jokes.
I picked up a free Polish newspaper. I have no idea why - it'll just take up space in my bag. But I can actually say the Polish for "thank you" now, which is something of an achievement given that I was just throwing random sounds around and doing my best Idiot Abroad impressions yesterday.
And I wandered around the outside of it. And walked, and walked, and walked. The thing was massive. And 20 minutes later I managed to find the tourist office, which was on the other side - and about 5 minutes walk if I'd just walked across the front of the thing. Postcards for 1 zloty (about 20p) - sorted. Take that Western Europe, and stop trying to charge me 2 euros for a postcard please!

So yes, the train to Krakow. Which was compulsory reservation. I didn't have a reservation, ain't nobody got time for that! But I'll just play the confused foreigner card, it's fine.
First of all, I just tried to get into any compartment. But then a load of people with reserved seats there came in, so I had to awkwardly traipse out with my pack. And then I had to squeeze down the far too narrow corridor and inadvertently invade a few peoples' personal space. Oops. And then I got in the way of the door. Eventually I just decided to walk down the train and look for an empty seat, which I found in a non-compartmentalised carriage just down the train.

I was sat down, with some banging trance playing on my iPod (only appropriate, given that this is the East), and then the train started to slow down. And then it stopped. The engine was off. I had only the view of a Polish farmhouse to keep me company. I tried to get one of those classic train photos, of the side of the entire train - but to no avail.
And this was when the conductor decided to check our tickets. Were they going to throw me off here for not getting a reservation, as a lesson? This is the East after all, and the confused foreigner card does't work too well. And apparently, if you start practising saying random Polish words when you have earphones in, you're actually talking quite loudly and people will stare at you.

But she didn't mind at all. The Polish are a friendly bunch, and she even stamped next to the relevant entry on my interrail travel report. Memento number 94, here we come.

And then two trains came from the other direction, and off we were again. On what was definitely a two-track stretch. Why we had to wait I don't know, but this is the East after all. It's not exactly super-efficient German rail. I'm fairly sure some of the carriages were Soviet-era, and the loco was most certainly a bulky Eastern European affair.

Bought a bottle of coke off the trolley, and the guy mentioned he used to live in Rochdale. I can see why I came back to Poland. Apparently it said that I had to share it with "Brunetka", which unfortunately doesn't count as an excuse to chat up a brunette Polish girl. Oh well - I prefer blondes anyway.

Then we pulled into a random station in the middle of nowhere with a name that contained far too many W's and Z's. See, it's not just the Welsh language that overdoes things. And it had those l's with the funny line through them, which means that Lodz is pronounced "wodz" and just sounds like Jonathan Ross pronouncing the letter R. And so I got a picture of a red roof, because I take pictures of everything. I'd much rather they'd have gone through Kielce, which I only know of because it has a good handball team, but that would have been one of my less useless photos.
And then it was Miechow, which sounds far too much like Meow for my liking.

But then I put my laptop away, stopped being so bloody sarcastic and cynical, and looked out of the window.

The Polish countryside is beautiful. Especially when the sun shines on it. And instead of talking much more, I'm just going to show you some photos explaining what I mean. 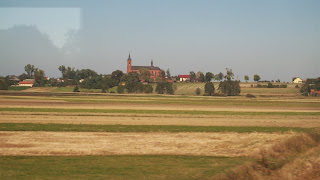 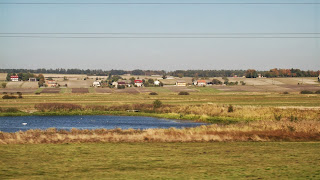 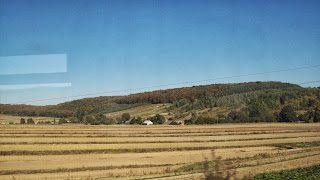 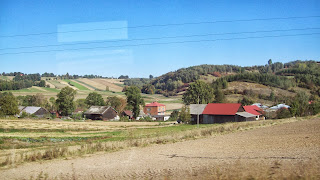 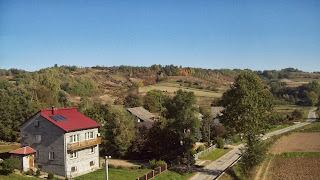 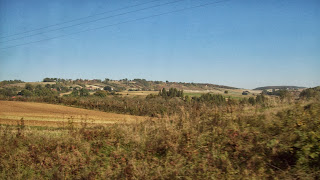 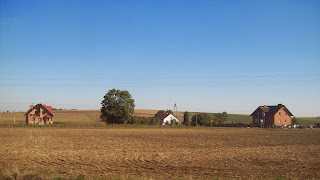 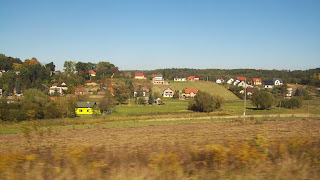 Eventually though, having stopped pointlessly a few more times, we pulled into Krakow. That journey did not feel like 3 and a half hours. In Britain, it would have felt like 6. I'm fairly sure that 3 Polish hours is less than 3 British hours, but there you go.

That's why I love the travelling bit of travelling. You see so much, especially from trains. And you can always sleep, eat, update blogposts, read guidebooks and whatever else. Though sleeping on trains confuses small Polish children. Especially with inflatable neck pillows.