So I slept in far too late after the events of the night train, and eventually got myself out of bed to do some sightseeing. If sightseeing is possible in Belgrade, it being a bit of a socialist architect's dream at first sight.
I woke up at about the same time as the guy in the bunk below me, an Aussie guy called Ollie. I assumed he'd had a heavy night or something, but it turned out he'd actually arrived on a flight from Oslo at about 1am and was doing the same thing as me: sleeping it off. He asked if he could tag along on my wander and I was more than happy to oblige: 4 cities in a row of going around on my own and that was getting old (and lonely) a bit fast.
So off we wandered. Belgrade's a weird mix - on the outside it seems very concrete and dull, but there are a few buildings left from the Ottoman and Habsburg eras. And I got annoyed at having to transliterate Cyrillic script as per usual.

And some that were bombed by NATO are still there! Got stared at by everyone on passing trams for taking pictures though - TOURISTS! 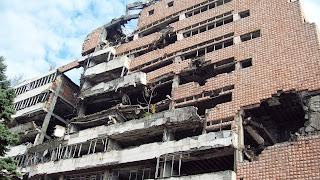 The citadel is still there too, but how much of it is actually modern concrete to make it look good is debatable. Nice view of the city from the tower, and for 30 dinars I'm not complaining. And I got an ice cream cone with alcohol in it, because this is Serbia and anything goes. 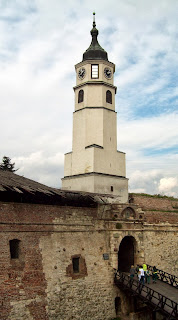 It was really warm outside, which was naturally t-shirts and shorts weather. Except for the fact that this made us look like massive tourists, because for some reason the Serbs were all in jeans and thick jackets, as if 20 degrees was a record low temperature or something. Genuinely saw someone in a scarf too, but I'm too British to say anything about it.
Then we realised that walking in this heat was overrated and jumped on the tram to our next destination. This was after trying to throw any Serbian at the poor woman in the kiosk who sold us the tickets. Turns out the word for five is pronounced 'pet', which just made me feel like a Geordie, but there we go. And Ollie spoke German to her instead, because it's obviously very similar to Serbian.
Then on to the tram and none of the locals actually had tickets. Dang. We went up to the Cathedral of St Sava, which is the largest Orthodox Cathedral in the world. My dad will be jealous that I went there first. And if he ever goes there, I hope they've actually finished the interior, because otherwise he won't be able to justify spending about 3 hours staring at every fine detail like he usually does - oh the pain.
A great thing about Belgrade: it's dirt cheap, even if they put chips in kebabs. Yes, I had another one. But less than £6 for a mixed grill, salad and beer and suddenly we're talking.

And beer is cheap. As is rakija, the local plum brandy, which is actually fairly lethal. But I managed to blag far too many free shots of it while I was there. We ended up in the 'dungeon' of the hostel bar (because apparently people like to sleep at 2am?!) talking to some Serbs who were convinced that Novak Djokovic was going to come back from living in Monaco and become President.
Then Serg, the crazy long-haired guy who had immediately shouted "SHEEP SHAGGER" at me when I told him I was Welsh (who knew the Serbs knew too?) took us on a 'pub crawl', which actually consisted of a wander round the block where he introduced the 'bar for the truck drivers and hookers', 'the cocktail bar', 'the rock bar' and 'the club' as if there this was all that existed of Belgrade's nightlife. And then he took the German girls who we'd met earlier on a 'sightseeing tour' - at 2am. Guess they didn't see a lot, and he definitely didn't have ulterior motives in all this.
Day 2 and it was time to escape the concrete and go to Zemun, the suburb that actually looks nice. I was about to leave when Milos, also a Serb, asked me where I was going - and then managed to convince everyone to come. Once Jack, an English guy who was also staying with us, had finally finished his soup (it took him a while, and we mocked him constantly for it, because we're funny like that) He proceeded to mock me all afternoon for 'wanting to go alone', so I mocked him back by making inappropriate comments about NATO, Kosovo and the quality of Belgrade's architecture. Luckily he appreciated my dodgy sense of humour.
But he showed us around Zemun and found a bar next to the Danube, where we had a few beers and generally had a laugh all afternoon. And put up with my awful sense of humour again when he tried to point out the bombed out building in the distance as "the one that looks awful", and I said that it all looked awful. But there we go, I'm no diplomat.
And back to the hostel bar where we eventually actually made it out into one of the clubs that Serg hadn't mentioned, but it was pretty dead. Got frisked on the way in while I still had everything in my pockets, which just confused me. Guess they were looking for guns or something. It had gymnastics rings hanging from the ceiling though, but given that they shouted at us if we tried hanging from them, it begged the question of why not put them away? Or was it just part of the decor - the atmosphere - which was so clearly lacking given the lack of people?

So we tried the next place along instead, which was fairly heaving. They let the girls in, but us blokes had to wait for excessive amounts of time while the bouncers perved on the various women inside. But that's just this part of the world for you.

I had a great time in Belgrade, and a lot of that was because of the atmosphere in the hostel - if you're ever there, stay in the Green Studio, I highly recommend it!