The first thing I had to do in Tirana was get some cash. There are 165 lek to the pound, which had the potential to make me feel quite rich.
That is, if I could find an ATM that would take my card.

Wandered down the street past a drunk policeman who was meant to be directing traffic. Or he was making those signals, but to pedestrians, on the pavement. Standard.

UniCredit on the other hand took Mastercard. I wasn't going to use my Visa and incur a load of bank fees, then have them asking why I'm withdrawing money in Albania.
Got to the hostel and the Japanese guy who was also on our bus, Hiro, was already there and seemed to have settled in quickly enough. I thought we'd walked fast (and spoken to Albanians as well), but apparently he'd used his GPS. Rich man he must be.

We also got stared a lot. John thought it was my shorts. I had many hellos as well as my personal favourite, an old lady staring and following my walk until she finally broke and cracked a smile under the pressure.
So off to grab food at some Greek souvlaki place, and we had the Albanian waiters fighting over us - highly amusing. We got the one who was overly friendly and keen about his job, and who actually spoke very good English, something I found quite unusual in the place overall.

Then Hiro flew past at a speed that could only trigger many, many bad jokes about his GPS. Because we're hilarious like that.

That evening I went to have drinks with a load of cyclists who were staying at the hostel too. Then a French guy who was going round Europe on his scooter turned up. I thought I was crazy.

Except we had to be quiet, because a couple in the next room had to be up for a bus at 5am. We were now meant to be considerate, unlike them who stank out the place as they made counterfeit Interrail passes. The passes looked rubbish anyway. And they were going to Kosovo. Interrail doesn't work in Kosovo.

Lesson of the day: John has some sort of love affair going on with the Albanian flag.

Lesson 2: EVERYTHING here costs 1000 lek (about £6). Flags, clothes, sunglasses, the lot.
Or maybe it's just us foreigners.
Or maybe it's the only number big enough they know in English.

I wonder what a house costs. 1000 lek?
The night gone and off to go for a wander as per usual.

Skenderberg Square seemed like an obvious first choice - just had to talk John out of stealing the Albanian flag which is in the middle of it. I'd have preferred the horse statue to be honest. Might cost a bit too much to post home though...
But before we got there, we got invited into the mosque. While wearing shorts.

They made us take our shoes off though.
And then we tried to communicate, realised it wasn't going to happen, and off we went.

But the tourist information was shut. As was the clock tower.

It was Mother Theresa day, which is apparently a public holiday here. The only way you'd tell is that government buildings and other such things are closed. But it's a Saturday, so even more difficult to tell. None of the locals have a clue. Even Mother Theresa Square was dead.
So off to find an alternative view of the city, and just then we stumbled on the old Enver Hoxha museum (he was the dictator of Albania from 1945-85, or something like that), which is now a deserted building. It's a pyramid, and in the UK it would probably be cordoned off. 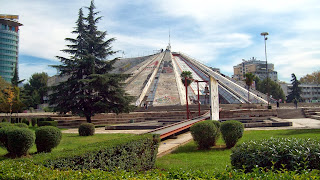 But not in Albania.

Health and safety is most certainly not a thing here. There are random holes in pavements and streets all over the place that you could probably fall down.

In Albania, the locals climb it. 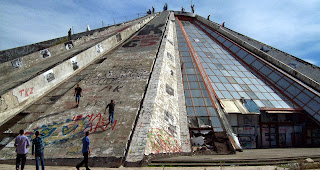 So me and John just had to join in.
Free view of the city? Sorted. 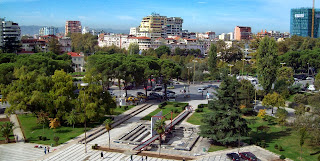 Pictures with the locals, because we're rare specimen around here? OK then. We're in this bit of the world. 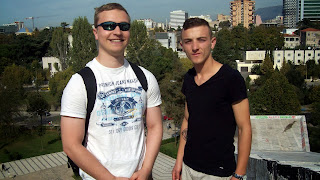 And then to get back down.

It's pretty steep, and takes it out of your legs. If I'd slipped then I'd probably be on my second visit to A&E already, but no problem.

So down from the pyramid, we went to look for Classic Albania Part 2. The bunker. These were built by Hoxha when he got even more paranoid than usual and thought that they might be attacked.

So standard photos taken, and jokes made to other tourists about a 2€ entry fee (of course not, entry to EVERYTHING is 200 lek here), and we were accosted.
By a "friend". Who was definitely not just after our money. Because this is Albania and everyone is friendly.

First of all it seemed like he was just giving us directions to Hoxha's residence.

Then he took us there.
Then he tried to take us on a guided tour of Tirana at breakneck speed, showing us his broken arm and saying he had no money for food. Rumbled. I gave him 200 lek, which is all of £1.50 to me but quite a bit more to him, and told him to have a nice day. I needed some food and not his guided tour.

Tirana's a bit mental though. It's a bit of a monument to communism, which sticks out in certain places more than others.

How about stone seats in an outdoor concert venue in the park? OK then.

Being able to fire a gun in the park? Standard. But no John, I'm not going to aim at the birds on the branch above the tree, because (1) it would be harsh and, more to the point, (2) I'd probably miss them and be very embarrassed.
Back to find some dinner after attempting to recover from the attempt at a guided tour (who actually does these things, really?!) and we had a few recommendations. The first one, Oda, is also recommended in Lonely Planet - but not only was it empty, but it had a weird handwritten menu of such things as "lamb's head" and "lamb's innards" etc. I just hope it's been lost in translation! We bolted and back to the place we went yesterday which seemed a safe bet.

And the waiter was very excited. They actually had lamb kebabs today.

They were good as well.

A bit of (very strong) ouzo later to finish the night and it was off to grab some sleep before heading to Berat the next day. Goodbye, concrete jungle. You've treated me well.