So where do I get my Bosnian passport?

After getting in after 3am it was up bright and early at 8 - I had a minivan coming to pick me up at 9 and I had to be ready. Wandered across to a mini-market of some sort for some breakfast and supplies for the day. They had a bit of bread but mostly empty shelves. How stereotypical. So after a wander trying to find some meat to put in my bread, but eating a bit of the bread because it was the morning and I was hungry, I eventually found what passes for a supermarket in Serbia.

Next door to the hostel.

I'm not too good at this finding stuff lark.

And then eventually the minivan turned up at more like 10 (how I would have liked the extra hour's sleep) and Serg just said "It's the morning after Friday night - welcome to Serbia!" So I just threw everything in the boot and we got going. That said, I got told off for the heinous crime of opening my window after all of 2 minutes. Why that was so bad is beyond me.

It took about 10 minutes for the coughing fits to start. I'd left my water bottle in the boot. So after a rest stop and getting my water bottle out, they weren't quite so bad. The Serbs still looked at me funny for coughing though.

And then the second rest stop. My food, found with such effort in Belgrade, was also in the boot. So I annoyed the driver by asking him to open it again. I really can be a bit of an idiot abroad sometimes. I blame the 4 hours sleep.
Then we crossed the border into Bosnia, and immediately the beauty of the place hit me. The Drina river valley (chuck it into Google Images) is incredible. Turquoise river water and a winding valley and it was pretty much heaven. Loved the place. Fairly sure that I'll be back at some point to take in some more.
But Bosnian driving is even crazier than the Serbs. The number of accidents I saw when I was in the country, some fairly nasty, was a bit mental. Not quite on Indian levels yet though.

The hostel was deserted and I got a 4-bed dorm to myself. Bit anti-social but the owner was a bit of a legend. And it meant that I could bring back excessive amounts of dirt cheap takeaway pizza without anyone caring, as I did that night. £1.50 for a pizza and Dominoes could learn something.

The Old Town's nice in the evening too. Went for a bit of a wander, then saw the sun setting and went for some sort of jog-run-crazy Welshman affair so I could get some photos. Because that's just how I am. Though using the cash machine was interesting, as the French woman in front seemed unable to use the thing and I was too British to say anything, but the Bosnians behind me weren't so polite and told her to hurry up and applauded her when she finally left. I found it amusing.
So off to bed and for more than 4 hours' sleep.

The next morning I destroyed a huge omelette (250g of it - why do Europeans insist on putting the weight of the food on the menu?) and had some "Bosnian coffee" - a jug of espresso and a jug of hot water, and you just get a few shots of it. My kind of coffee, and I like coffee. Made up for not having any coffee the day before, which I'm blaming for the coughing fits. I need coffee.
Then I was ready for a wander of the Old Town, and what a place. It's hard to believe it's in Europe sometimes, with the mosques and minarets and random calls to prayer (though the people doing it really can't sing!) - but it's not really Middle East as it's just far too green! This made speaking what was essentially the same language as in Serbia a bit of a difficult concept to grasp, and oh I was glad that they bailed me out when I walked in and looked like a confused tourist. 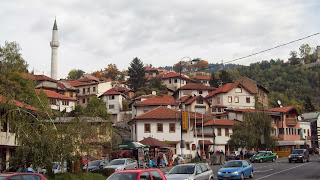 Well, apart from the one who just went off on one in the local language, whatever they call it. Bosnian? Serbo-Croat? Whichever one takes your fancy.
So after that it was off to the tunnels, which were built during the Siege of Sarajevo and basically prevented the city from capitulating. Fairly incredible even if I did bang my head wandering through the tunnels, and get told off for being too British and saying "thank you" too much. Plus they didn't care that my student ID had expired and I got in for half the usual price.
On the way back I was looking for some sort of view of the houses on the hills, so I got off the tram a bit early, walked across some dodgy footbridge affair, and then stumbled across a Bosnian street market. Stuff is put on the ground, on tarpaulin if you're lucky, or alternatively just chucked on to the fence. They can't afford market stalls around here. 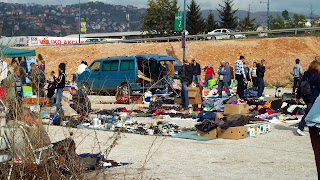 And there was a gold mosque. 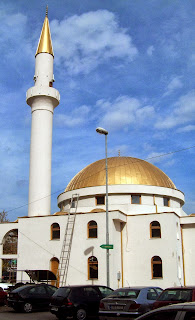 Why I find these things is beyond me. But I have to be the tourist and take photos.

Back in Sarajevo and filled up with what they called a "Bosnian sandwich" (yeah I have no idea either) I went to find a good view over the city. First of all I wandered up to what I thought was the Fort, because apparently that has good views.
But it wasn't the fort. So after getting lost a few times I stumbled on to the Fort, which was devoid of any safety regulations and that I could just climb all over and sit in fairly dangerous places above 100m drops. It was a good view though, even better than the poor attempt at a fort that I was at before.
But me being me I saw some steps, which led to a road, which led to somewhere which most certainly was not in Sarajevo and which I think was some sort of mountain-top lodge. Yes, I accidentally climbed a mountain. And the view was even better. Though whether it was worth 6 hours of walking is an open question. All I know is that I was so tired that I made a fool of myself in the pizza shop by trying to order a pizza that didn't exist - I looked at the one menu that was in there and ordered one of the random names in Bosnian. But that was the sandwich menu. And I got a reply in Bosnian that I didn't understand.

The perils of being a real idiot abroad, eh?
Posted by Anselm at 23:20