Getting lost in another Polish city

I arrived into Krakow at about half 2, and booked my night train to Prague. It cost me 40zl (about £8) - take that Deutsche Bahn!

Then I wandered round the road that goes around the park that goes around the old town. All the way round. Right past the hostel. I couldn't find it and the Polish street sellers didn't want to help (they said "I don't know English" - in English) so I had to ask the old standby to bail me out: my long-suffering mum.

And then I found it.

They had triple bunks. 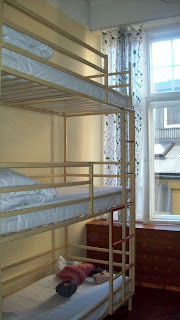 All this walking and getting lost (seems to be a theme of Polish cities...) and I needed some food. I went to a restaurant on the advice of the hostel receptionist that was called Grandma something's. Apparently it did good traditional food and was "not expensive". So I wandered down that way.

I found the sign for the restaurant, and first of all I thought that I was walking into a church. Then I went down some stairs into a basement. This 'restaurant' was a Polish milkbar. Classic decor, wooden benches, wooden tables, the lot - atmospheric to say the least.
And it was so so cheap. I ordered something that translated as "assorted meats", which I assumed would be some sort of mixed grill. And mixed grill is pretty much me. It was all self-service, they called out your number and you went up to get your plate. My number was 161, and to this day I do not know what that is in Polish or how the hell I managed to work out that it was mine.

It turned out that I'd ordered a large plate of meat plus mushrooms plus sauce plus rice plus salad. My kind of meal. Filled me up quite nicely for about a fiver - bargain!
I washed it down with beer of course, which is acceptable to drink at any time and with (or without) any meal when you're travelling. I'm essentially a nomadic bum, so I may as well fit the stereotype given that I'm sprouting excessive facial hair already.

I liked it so much that I went back again later.
I met some American girls at the hostel - Jamie, Sara (with no H - these things are very important apparently) and Colleen - who were doing a year abroad in Luneberg near Hamburg, and an American guy called Josh. The girls seemed to like the sound of the restaurant so I showed them where it was. They joked I was just there for the food and for private security, which given that all I do is make terrible jokes then it was probably true. This time I had a rump steak. Which definitely wasn't a rump steak. But it was still bloody good, and all for the equivalent of £3.

And then we went for a wander round Krakow, and found a 24 hour deli. Since it was a solution to the major first world problem found in Europe that nothing is open late enough, we had to go in. And we proceeded to spend about an hour in there because noone knew the Polish for protein, carbs or fat, which is obviously very important. And asking is just admitting defeat.
Apparently Poland is cold at night too. Maybe German Martin's comment in Berlin is true after all.
Posted by Anselm at 10:18