An eventful journey to the coast

Eventually I dragged myself out of bed and to the train station for the 6:50am train to Mostar, which I'd been reliably informed (well, he was northern, so maybe not that reliable...) had some of the best scenery going. This involved walking past the US Embassy, which is unnecessarily big. I'd show you a picture, but they had 'no photography' signs everywhere and lots of men with guns. At 6:30am. Oh how I'd love to get a photo of the 'no photos' sign, just for irony's sake.
First of all it was dark, and then everything was covered in mist. Where was this scenery I was promised? Or was mist some northern delicacy that they oh so adored? So tired, hungry and disappointed, I wandered across to the buffet car for some breakfast. The guy didn't speak English, but we worked out that I wanted food but that there wasn't any. In the buffet car. Just coffee. OK, I'll have one of them then.

So the guy went into the kitchen for what seemed like far too long to be making coffee. Then he returned. With some food. Well, I say food, but that was debatable. It was a can of pate or spam or something like that - I have no idea what exactly. But I was hungry, and anything was acceptable. He even found some bread to go with it - the height of extravagance.

Eventually though, the mist rose, and believe me the view was magnificent. My photos don't nearly do it justice, but anywhere with turquoise rivers is a winner in my book. 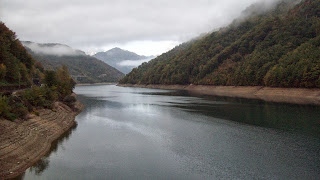 So I annoyed the woman sat opposite me by taking photos of everything, getting up and moving to the best side every 10 seconds, and opening the window and giving her a blast of cold air.
It woke her up at least.

This is the Bosnian countryside, therefore it's beautiful. That's my general conclusion about the country. 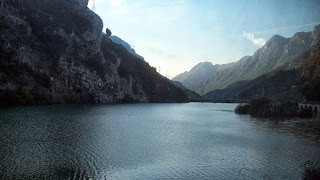 Bosnia, I'll be back for sure. 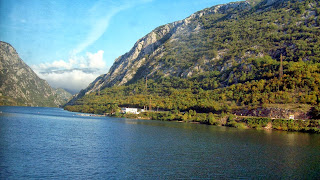 So it was on to Mostar, the town with the famous bridge that got blown up during the Yugoslav wars and then rebuilt. It also has a few bombed out buildings. And not a lot else. The train pulled into the station at about 9:30am, so I went straight to the bus station office to sort out a bus to Dubrovnik for later that day.

What time is the bus? 10am. No, that's a bit soon. 12:30? Yeah, more like it. So, new challenge: do Mostar in 3 hours and without the massive rush back that characterised Bratislava. Extra challenge: I had my pack on, because I couldn't find left luggage anywhere.

This all made the whole clothing situation a bit more interesting. 6:30am is cold in most places in the world, and it certainly was in Sarajevo. 9:30am not so much, especially with a 15kg pack on your back - so hoody was off. Except I stopped right outside some guesthouse, which led to someone asking me if I wanted a room. No, I'm leaving in 3 hours, I don't think I'll be needing one.

And then changing from jeans to shorts in public. That was interesting. Being arrested for public indecency might have made the 3 hour challenge a little more difficult. At least I'd have got a free lift to the station I suppose.

So, shorts, t-shirt and sunglasses on, big pack on my back and small pack on my front, I looked more like a tourist than ever before. And so I went for a wander round some bombed out buildings. 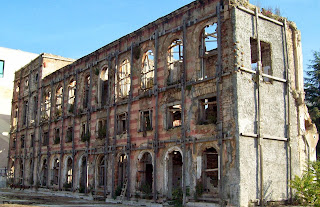 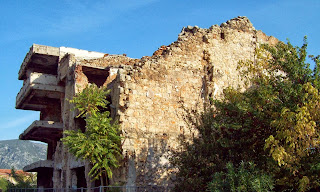 Honestly, quite a fascinating way to learn history. 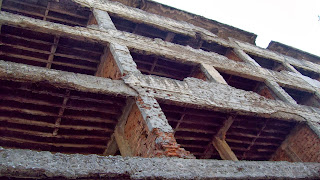 And then I got bored of bombed out buildings, and went to find the Old Bridge that Mostar is so famous for.

Eventually though, it came into sight, and so did all the tourist traps that go alongside it. 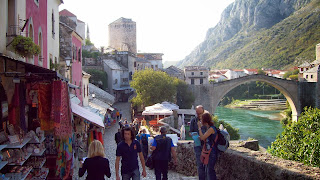 So I wandered over, got annoyed at tour groups who were taking up space on the bridge (what else did I expect), looked for somewhere to get a good photo of it, got annoyed at more tour groups who were blocking every available path, and then wandered down to a terrace where they clearly take the postcard shots from. It's a really nice bridge, and an incredibly impressive reconstruction.
Then I got accosted by a "tour guide". I will teach you the history of the bridge he said, after trying to befriend me by mentioning how Bosnia is the same size as Wales. But as I knew all too well, he just wanted my money. Out came the sob stories of how he had a family to feed, how his dad was killed in 1993 (OK, so that bit might be true, but it's no reason to try to get money out of me), and how Bosnia has 70% unemployment (no it doesn't).

OK, so I'll take your photo under the bridge. Yes, go ahead, this seems like a perfect opportunity to give you a couple of euros and get rid of you.
He took a good photo of me to be fair, and I gave him a bit of cash, but he still wanted 10€ to 'feed his children'. I suggested he looked for someone richer than me who had more than £3000 to get himself to Australia in 3 months.

But yes, all done in a couple of hours fairly easily. So away from the tourist trap places and in to the Bosnian bit of Mostar and I found a place that did a good plate of meat for the equivalent of a fiver with a drink. And it even had a terrace with a view of the bridge. Win.
Proper food in me for the first time that day, it was back to the bus station. I sat there for a while and eventually another British guy turned up, an eccentric Englishman called Kevin who was also going to Dubrovnik. He was a funny guy, and apparently eccentric people get on well. Who knew?

After ignoring a few beggars wanting our luggage money (genuinely), we got on board and sat at the back next to a Kiwi girl called Anita who put up with the two of us for that journey. She even joined in with our eccentricity now and then. But not very often. Far too many border controls and several cars overtaken later (no mean feat in a fully loaded bus) we got into Dubrovnik, arranged to go for a beer at some point and finally worked out what each others' names were.