In search of German efficiency

Oh 6am, how I have not missed you. But it was a choice of get off the train or end up in Prague. Adam managed to lose his glasses on the train (see, losing a t-shirt wasn't that bad) and nearly got taken off to Prague as he was looking for them. So he was now blind for a few days, but luckily he left it in a German carriage and they will probably be all efficient and find them for him. If it was the Czech or Polish carriage, then he might have had problems. 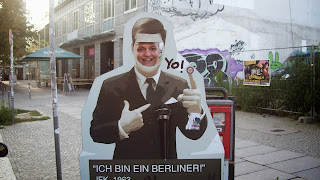 They charged 6€ for a locker in the Hauptbanhof, which was a little difficult to take in at that time of morning, but we squeezed far too much luggage into one locker. That was after we found the lockers, which were hidden away in the car park and not where the left luggage sign sent us. How inefficient of you, Germany - I don't expect such things of you.
That time of morning is bloody cold outside too. But we didn't really have much choice - we couldn't check into the hostel until 3pm so we wandered around Berlin a bit. And took photos of everything, which really annoyed Rory, who was doing a great miserable/angry Scotsman impression. But we eventually made it to the Reichstag (via lots of places that definitely weren't on the way) and worked out that we had to book a timeslot to visit the dome in the Reichstag. But it was free, and I like free stuff, and I like aimlessly looking over cities. How very efficient of them. Us British usually queue up for hours and hours to visit anything. And probably drink excessive amounts while we're at it, and generally be loud, because we're British.

So in the meantime we wandered around the corner to Brandenburg Gate, which had some fence all around it. How inconvenient for me - my 3000 photos of the Gate would have fence in them. How disappointing. I'm sure I'll get over it. Then Rory managed to get scammed by a woman with a clipboard "raising money" for "the disabled". Yeah, they tried that on me in the Gare du Nord in Paris once. Then we decided to walk to Potsdamer Platz, but apparently my sense of direction isn't actually that good and we went east and not south. Half an hour later and with Potsdamer Platz (less than a 500m walk) not in sight, it finally clicked that actually we were wandering towards Alexanderplatz. Not my finest moment given that they thought I could read a map. We went past a load of buildings that looked like the Germans had genuinely visited Greece and demanded that they give them their buildings in return for bailout cash, and I claimed to only speak Welsh when some beggars came along. I've never come across a beggar who does speak Welsh, so it's a great tactic.
By the time we finally reached Alexanderplatz we were running a bit late and in danger of missing that timeslot that we had oh so efficiently got earlier in the day. Jumped on the U-bahn, and had to change at Potsdamer Platz! So we actually saw Potsdamer Platz in the end, but only because we were running between the U-bahn and S-bahn stations (apparently this is efficient?), but just about made it on time. I got a postcard with a bit of Berlin Wall in it at least. Probably a tourist trap and I'm 2€ lighter, but I collect postcards everywhere I go so it'll be a good momento.

And one day I will stop talking about efficiency, but today is not that day.