And now we're really headed back for the east. Prague seen in a day, its beers sampled in a night, it's time for the whistlestop tour to get on the road once again.

Prague-Budapest is a 7 hour journey that I was originally going to do on the night train, but that would have involved sticking around in Prague for another day until midnight - and I didn't have enough to fill a day with, because I wander round cities far too quickly for my own good. 7 hours was probably pushing it for all in one go (yes, certain parts of the world will require 18 hour journeys in one go, yes, I know - but I'll save that novelty for later) so Bratislava seemed like a decent halfway point to stop off. 4 hours from Prague to Bratislava, the Prague-Budapest train was every 2 hours, and then Bratislava to Budapest takes just under 3 hours.

So. One city in 2 hours. Even by my standards, that was always going to be a challenge.

Dragged myself out of bed at some silly hour of the morning to get myself some breakfast, only to find that I'd dropped my phone from a 3rd tier bed to the floor again. I really am useless like that. And worse than that, some moron on one of the bunks below had hung their wet clothes on the LADDER. The ladder to MY BED. This defies logic in more ways than one - and I can't move it before I go down, because some of it is too far down to reach (these are triple bunk beds). I can't move it as I climb down the ladder either - I don't have the ninja skills to do so and would probably fall off. Plus wet clothes transfer water to surfaces they're on, and water is slippery. Common sense level: lacking. Hang your stuff somewhere else where I'm not going to stamp on it or slip on it. Like on the rails of YOUR BED for example.

By doing this, you also avoid what I managed this morning - falling off the ladder as I attempted to avoid the clothes, catching my hand on something as I tried to break my fall, splitting it open. I hope the sound of me hitting the ground woke you up. Douche. Injury #1 of the Tour is recorded.

Anyway. Got myself out of there, with excessive bandaging of my hand (of course). The great thing about moving this fast is that I never need to pack, because I never have the time to unpack. It's the one time in my life that I've been tidy and my stuff hasn't been sprawled everywhere, as anyone who's ever lived with me will testify is not normal. Or anyone who's been into my bedroom for that matter.

Money changed (I took out 2 days' worth of koruna, so I changed the spares into euros) and into the station for the train. It was pretty empty. I had a 6-seat compartment to myself for most of the journey, which I took great pleasure in locking the door of so I could sleep in peace. Probably against some unwritten rule of train etiquette, but there was plenty of space in the rest of the train.
I got a bit of sleep. But this train had electrical plug sockets. And trains here never seem to have sockets. I could actually use my laptop for the journey to crop some photos, write blogposts and other such antisocial things that my life is taken up with these days.

I kept the door locked though.

Then we pulled into Bratislava. 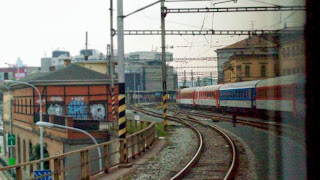 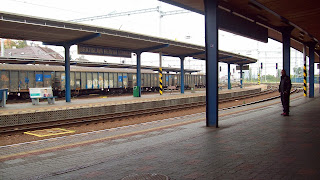 I needed to drop my pack off first, but that involved finding left luggage. I'd seriously considered just leaving my pack on the train (which was headed for Budapest anyway) and picking it up from lost luggage in Budapest in order to save a bit of cash. I decided against it, on the basis that knowing my luck it would end up in lost luggage in Moscow. And the Germans still haven't found Adam's glasses.

But there were no signs for Left Luggage when I arrived at Bratislava station. I went out of the station, which felt like some sort of provincial affair without much going for it. Then I went back into the station through what I presume was the main entrance, because I was immediately confronted by hordes of people playing the international sport of Departure Board Watching (seriously, what's with that?). And eventually found it, hidden away. Right next to the platform I'd arrived on to.

2€ lighter I set about getting into Bratislava. I had just under 2 hours to kill before the next train to Budapest came along, so had a look outside. Couldn't see the city. Just some more concrete and a load of street stalls.

So I went back in to get some coffee. And back out again for another go at it. Then back inside for a third time to ask someone on the information desk for a map. She just said something about a trolleybus and a kiosk.

So I had a look outside. I didn't have a clue. So I went inside again and bought myself a kebab, which I'm fairly sure was about my 6th in three days. They're cheap and everywhere. But I definitely ordered it in German, which means that I've been to far many countries in the last few days.
Eventually I just wandered down the station concourse and on to the street. I saw a sign that said "Historic Centre" so went that way. And then, bam. Culture shock. And as with any culture shock, you don't have a clue why. It wasn't as crazy as the culture shock I had in India, but felt more like the more subdued one I felt in Moscow. Bratislava was strange - not what I was expecting in the slightest. Eerily quiet, lots of old crumbling buildings, and not sure if it was a capital city or a provincial town. It certainly didn't feel like a capital city. As well as that, it wasn't sure whether it was a classic Eastern European city which was a bit backward, or whether it was looking to Europe. They seemed to want the narrative to be that it was the latter - "European Business Centres", EU flags and they've even adopted the euro. But wandering around it felt like it was another world entirely - even Warsaw felt more cosmopolitan. And there were certainly few other tourists there, probably because you could easily do Bratislava in an afternoon.
The old town was nice though. And the castle looked good on top of the hill. And I went to say hi to the Danube again. Slovakia is a beautiful country, especially when you hit the countryside - and I hope to explore some more of it at some point. But soon enough, I realised that I was hungry and that I quite fancied 500g of pork for 7€. And yes, 90 cents for a beer sounds good.
And then the rush back to the train station started. It was 15:25 and my train left at 15:50. Miss that and I'd have to wait 2 more hours and get into Budapest at 9pm. No thanks.
There was a bus station affair beneath the restaurant, so I naturally went down there. But nothing went to the train station. Bit of an awful bus station really. And so I ran around a bit before deciding to go back to the other side of the old town, where there were buses to the station. And trolleybuses. Probably the trolleybuses I should have taken INTO Bratislava.
I wandered over a piece of red carpet (exciting life I lead) and set about rushing across the old town. Cobbled streets and rushing don't match. Especially when my favourite bugbear, large tour groups, get in the way. I think I must have shouted "excuse me" in about 12 different languages before they finally got out of their fantasy tour group world, realised the world didn't revolve around what their stupid tour group was looking at and that leaving a bit of space for people to get past was common courtesy in most parts of the world.
And on I wandered. Then nearly got knocked over by a tram, which is my own fault for not looking before I rush out on to...oh, tram lines.

And to the bus stop. It was 15:45 by this point. Even if I did make it, I had to get my bag out of left luggage. Why didn't I just leave it on the train?! I was genuinely praying that the train was delayed.
By some minor miracle, it was only about 30 seconds before a bus turned up. And off we went. If I thought my feet hurt the other day, then they were falling apart by now. We rolled into the station at 15:49. I couldn't run even if I tried. In I went.

Time for a spot of International Departure Board Watching (R). 15:50 to Budapest, no platform listed.

Had it just left?

The first time I've been thankful that a train has been that late. And I'm sure it won't be the last.