You know you've got too much gold....

.... when there's a giant rock coated in it, hanging perilously off the edge of a cliff.

But had to get to a city called Bago first.

The place noone's heard of, even the Burmese.

It makes booking a bus there fun.

Bagan? No. Not yet. Yes, foreigner will go to Bagan later.

I got off at Bago, and there were a couple of guys with motorbikes asking me where I was going – so I told them which hotel I was from, and checked that they were the guys from the hotel who were coming to pick me up – as they'd told me when I gave them a ring the night before.

Not risking a Rangoon this time, I'm most certainly not.

I went with it, until there was another guy chasing the bike asking me if I was from the UK, and if I had a reservation.

Turned out the “guy from the hotel with a motorbike” was actually a taxi driver, who'd neglected to tell me this. And when questioned by the real guy from the hotel, tried to claim we'd agreed a 1000 kyat fare.

The smug look on his face!

Me and the owner had a good rant about dishonest taxi drivers in fairly broken English – and if there's something I like ranting about, it's taxi drivers!

So I settled down in my room, and realised that because noone's heard of Bago, I didn't really need to book ahead at all. There were about 5 people staying in the hotel. Total.

He'd already planned out my transport for me – to and from the Golden Rock tomorrow, sightseeing Bago the day after, then an overnight bus to the Inle Lake. 32000 kyat total, and the breakdown of it seemed legit, so I paid the money and let him get on with it.

So I climbed up to the rooftop and had a look at lit up stupas, because just looking at them in the day is far too mainstream.

And the owner took me to the Chinese restaurant next door, which had brilliant food and 60 cent beers. He'd already sorted my tickets for me too. Proper hospitality this is.

So we had a beer, managed to avoid ranting about taxi drivers and just talked about football instead.

It's amusing watching the Liverpool, Arsenal and Manchester United fans having a bit of banter. They're the only 3 teams that people seem to support here.

6am's a horrible time to get up, but I had to get the bus to the Golden Rock.

And I got the seat that folded out into the aisle. Better than a stool I suppose. But still, I got whiplash if I tried to sleep, because it didn't have a headrest, and of course the woman next to me had to sit with legs crossed on her seat as if she was sat on the floor, and take up even more of my already precious space.

I'm far too British to complain, after all.

But we had to stop and wait for a load of monks to cross a road – also, because this is Burma.

As for the food stop, the restaurant didn't even have any food. Or even coffee. I had to go to the shop next door and buy a packet of crisps and some grape juice. Healthy.

The grape juice had bits of grape in. That's a new one.

Several whiplash-ridden naps later, we went up to pile into one of the trucks in the truck station.

And you pay at a random point halfway up, when you're squashed in and not really able to get to your wallet. Why they haven't thought about building a ticket office is beyond me, but there you go – this is Burma.

The drive up is a mildly scary affair, of far too narrow roads on the side of a mountain with random stops when trucks are apparently coming down the hill.

Before walking the last half hour, I needed some noodles and Burmese tea for sustenance. And with the quality of tea, I can kind of understand why we colonised them. It's pretty damn good.

Oh, empire jokes. I need to stop making them.

Off I went. And paid the tourist charge, of course. They give you something to wear around your neck too – a tag of sorts. So of course, I refused to wear it, and just carried it, in my one-man act of defiance against the government. 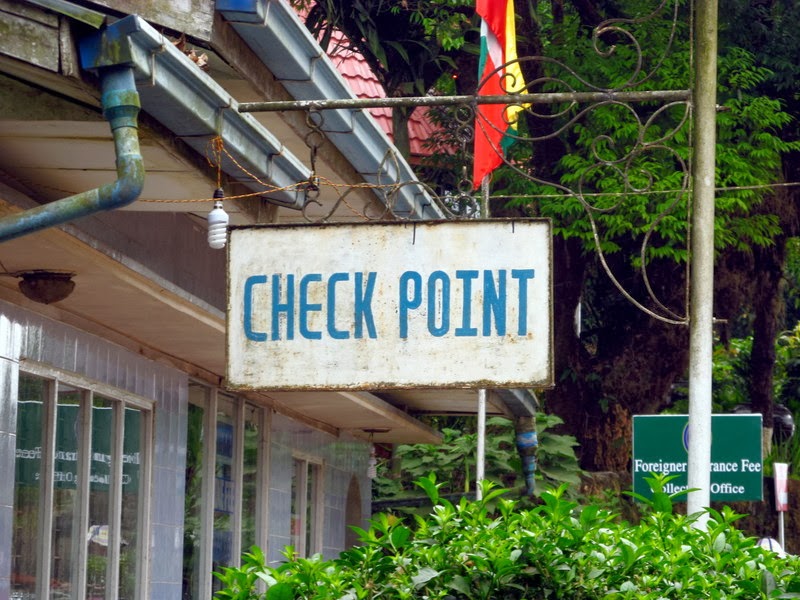 And after all that, the Golden Rock was smaller than I'd expected – and not quite the thing that would apparently convince anyone who saw it to convert to Buddhism, as someone said.

But the journey up there was worth it.

Though fair play – it's quite impressive.

And I was an object of amusement again. Especially with the kids.

They're all genuinely friendly though – even if they told me to throw away the “gift” on my wrist. Ah yes, that's a Hindu friendship band, and this is a Buddhist country. Oops!

If the truck ride up was bad, the one down was another level of discomfort. It didn't even have backrests, and was like being sat on peoples' laps in comparison.

So off I went to find some food before I got the bus back, which was now at 4pm and not 3pm, and with a different company.

This is Burma, Anselm. Go with it.

Though I should have ignored the restaurants that flung menus in my face, because their food tasted of a mixture of petrol and burning. Not exactly appetising, that stuff.

At least I had a proper seat for the journey back home – even if the aircon on these buses is always set to freezing. And outside it's too hot and humid. Can't win – however British I am in complaining about any weather condition that isn't the equivalent to a British summer.

And on the way back, the hotel owner seemed to be chasing the bus on his bike to make sure that noone else accosted me. Poor guy.

At least I could have some food that didn't taste like petrol or burning in the restaurant next door.

But I had to be up at 6am the next day to see Bago in order to avoid the heat, which wasn't incredibly ideal - but given the low occupancy of the hotel, I could nap in the afternoon.

Knowing my luck, a massive party would turn up for a conference that night and want to check in just as I was going off for some sleep, but there you go.

They did it all for 5 dollars as well – that's a motorbike for 4 hours. Oh, and breakfast too.

But I had to pay 10 dollars for entry to all of the sites in the town. Why they bother is beyond me.

There are lots of stupas in Bago.

That should probably sum it up.

But I could climb up one. That made me far too excited. 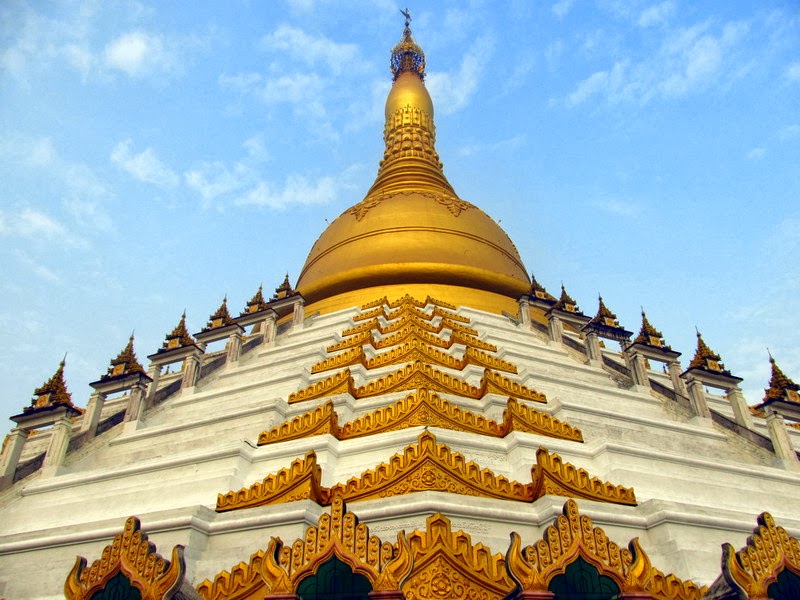 And the reclining Buddha statue that had seemingly been dropped into a field was awesome. He just lies there looking cool. What a guy.

Everyone here waved to me – even the small children! How well-trained are they? They don't just stare as really annoyed me in India – they actually make an attempt at some sort of human contact.

Something else I've noticed: this is one of the poorest countries in the world, but they really hide it. The poverty really isn't in your face, and beggars are noticeably absent. Just monks asking for alms all morning. And the only sign that the place is still very much not free is that hotels cost far more than they should do. Not that the locals will admit that – they'd probably lose their job. Though I discovered that a receptionist at a hotel in Rangoon gets paid on average 70 dollars a month.

At a place that charged nearly half that for a room for the night.

After seeing large numbers of stupas it was time to wander out into the countryside and have a look at a garden of Buddhas. Standard.

And here come the monks!


And I became more well-prepared for Australia when I discovered that there was a rather large snake underneath an otherwise fairly non-descript stupa too. 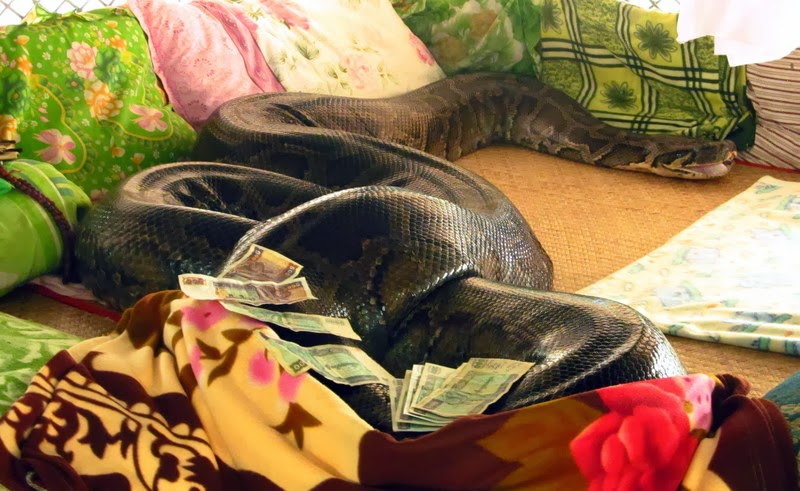 After all that, we were done by 10:30am – and I hadn't been asked to buy a ticket once. They only wanted a 300 kyat camera fee out of me. That guy must have the most cushy job ever.

On the way back, a trishaw driver was tapping his head furiously. Then someone else joined in.

Some strange Buddhist routine at 10:30am?

The traffic police were checking for helmets.

And no, of course I wasn't wearing one. It's not like motorbike accidents are a major cause of deaths or anything.

So we took a back street to avoid the junction that the police were waiting at, then went past said junction on the main road far too quickly so they wouldn't notice. 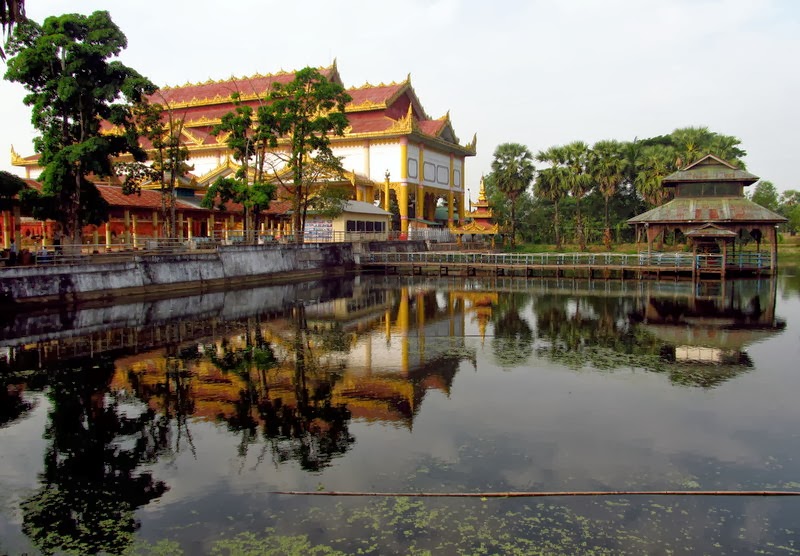 Nap done, food next door done for one last time, and time to bus it to Inle.

Though they only had Chinese tea. Which tastes of rice. Genuinely. Stereotypes are brilliant, brilliant things.


Time to sit next to the road while it tips down with rain. How fun is my life?
Posted by Anselm at 12:50