I haven't felt the cold for a while...

The Inle Lake is one of Burma's big two tourist spots, and with good reason: it's a beautiful lake with plenty of well-placed human additions which make it a bit of a picture-perfect scene in multiple places. So off I headed, joining the hordes, by overnight bus. 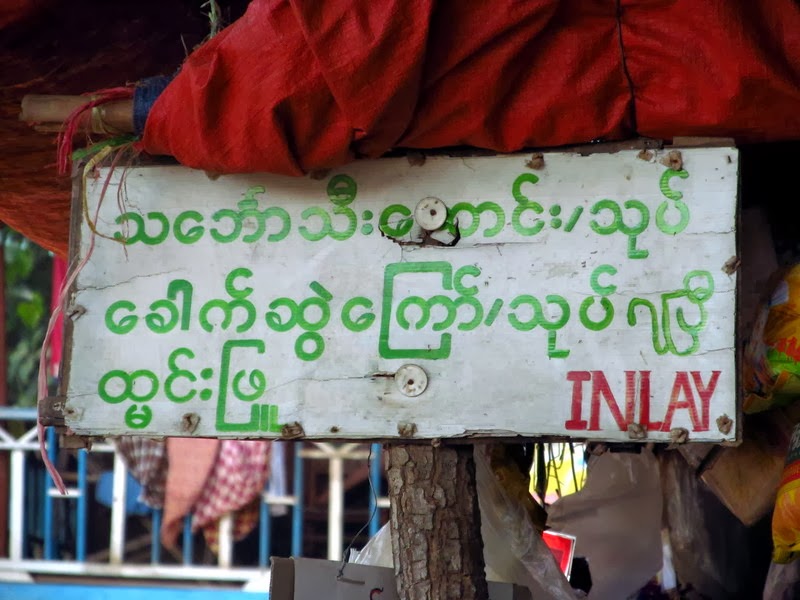 I'm not a fan of overnight buses at the best of times, but in this country they save a night's accommodation (which makes a big difference), and I'd been told it would be a VIP bus – so one with big seats, and that I could actually sleep on.

So when a bus stopped outside, I took a look at my Burmese ticket and tried to work out if the company was the same from the Burmese script.

Yes, it's the same company.

But this can't be my bus – it's just a local bus that I'd happily be squeezed into for a 3 hour day trip, but not for 12 hours overnight.

There wasn't even enough space for my bag in the hold.

Or any space for me inside. I was squashed in between a seat, a window, a Buddhist monk with his seat reclined (and you couldn't tell them to put it up, even if I was to revoke my British citizenship again) and a rather large Burmese girl.

This wouldn't have been so bad if I hadn't have paid $17 for the privilege.

At least I wasn't on the seat that folded into the aisle this time.

And the food at the rest stop tasted of burning too. Seems to be a thing in this country.

So I attempted to get some sleep while the same Burmese sitcom that they always play on these buses was played at ear-splitting volume, and the driver and conductor shouted to each other rather than talking like normal human beings would.

At least there was no aircon to be set to Arctic, eh?

And the girl next to me decided that it was a good idea to wake me at midnight to inform me that we were in the new capital, Naypyitaw. This is something that might interest me in the day, but at midnight, I'm trying to sleep and quite frankly I just don't care.

She seemed to get the idea. Poor girl.

Then we pulled in at some silly hour in the morning and had to take a shared taxi to Nyaungshwe, the town with the budget accommodation by the Lake.

Well, I say “budget” accommodation. The cheapest was $18. Who's going to open a budget hotel when you've got to jump through this many loopholes?

Oh, and we passed the government checkpoint at 6:10am. It opened at 6am. And despite the fact that hotels had dramatically increased in price, they still thought it was a good idea to increase the price from $5 to $10 – because us rich white people need soaking even more apparently.

I joined three Italians who I met on the bus, Francesco, Sara and Elisa, for breakfast in the overpriced hotel; at least they included that in the fairly extortionate room tariff. Anyone who can deal with my rubbish sense of humour is a legend in my book.

And the night bus to Bagan did indeed exist. Saving a night's accommodation here was always going to be a good thing, even if night buses are a pain to sleep on.

So I cheered myself up with some food – and Shan food really is the best Burmese fare, as I was told before I arrived. Doesn't taste of burning, this stuff.

As always happens, it was mid-afternoon before we decided to do anything – and so we grabbed some bikes with the intention of cycling across to the lake. 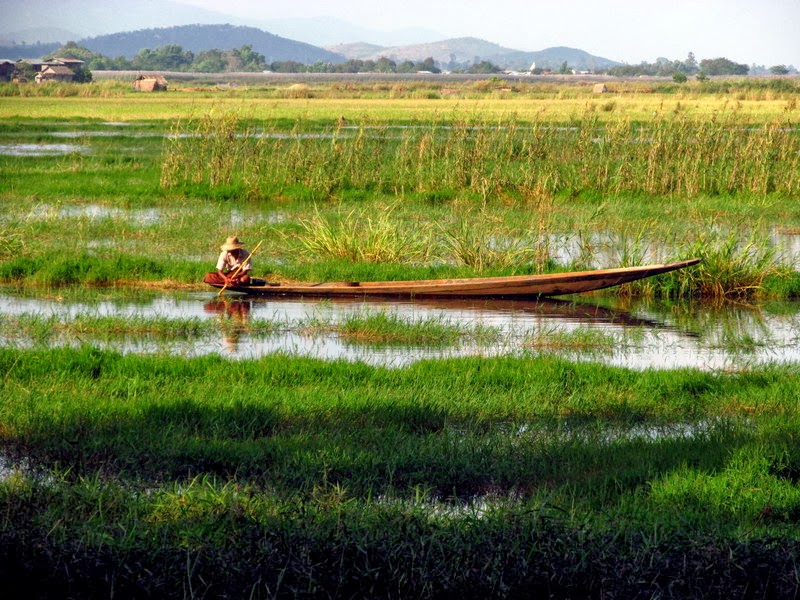 Plenty of photo stops required, of course. Even had a basket for my camera.

The rest gave up with 20 minutes or so to go, so I went pedal to the metal and got to the edge of the lake, only to be accosted by a boatsman. 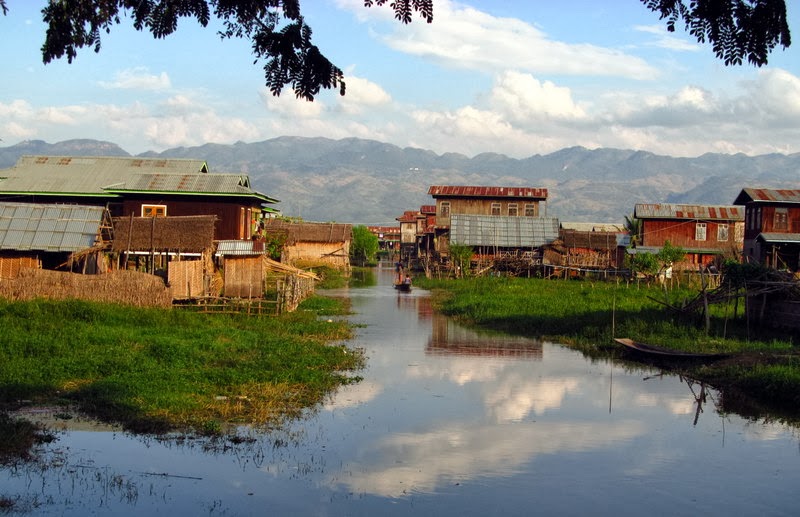 And it wasn't really the lake at all. Just an inlet that led to the lake. He wanted about a third of the day charter rate for a 30 minute trip so I just overpaid for orange juice instead.

Proper local village though – and everyone was very interested in Mr. White Man. 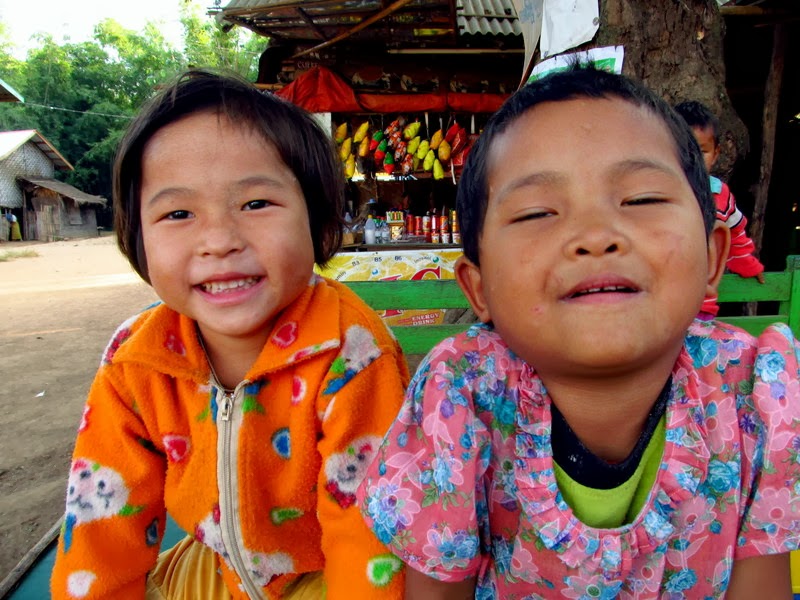 Especially the kids. They're amusing. 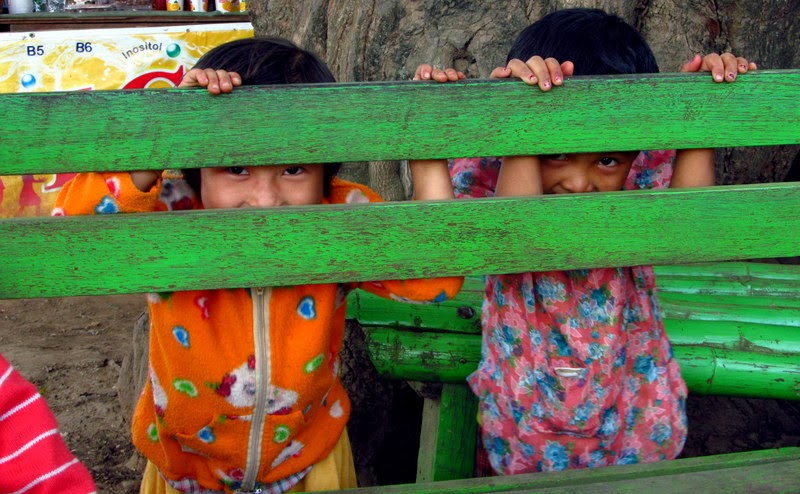 Eventually I took the road back, which was a lot hillier than I'd remembered on the way there. 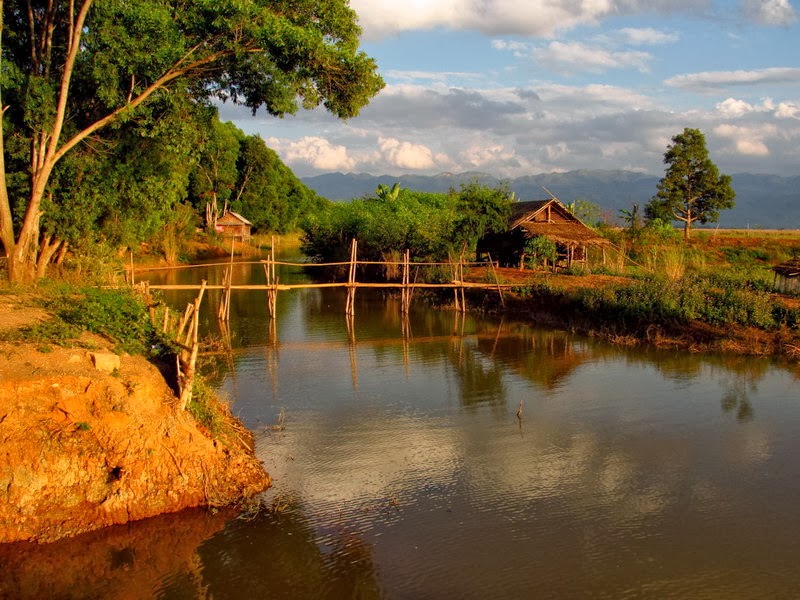 I ended up chasing the sunset – riding away from the hill that the sun was setting behind, stopping at every photo opportunity of course. 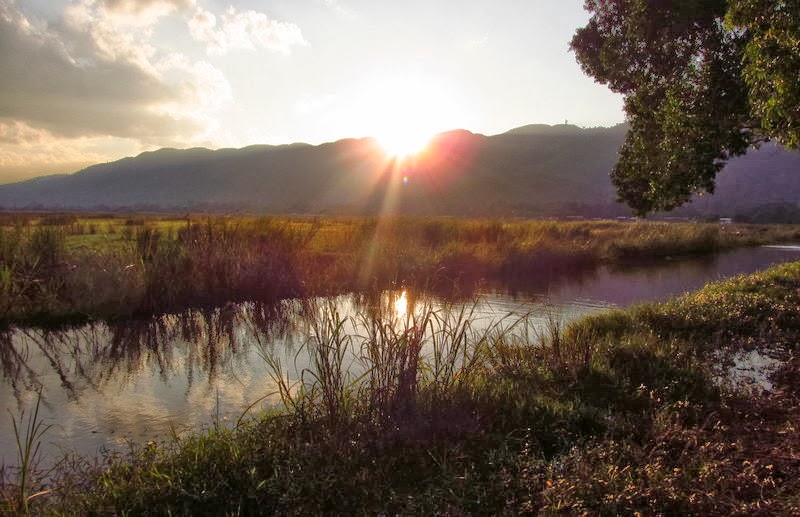 Which meant that chasing the sunset became more and more difficult by the photo. 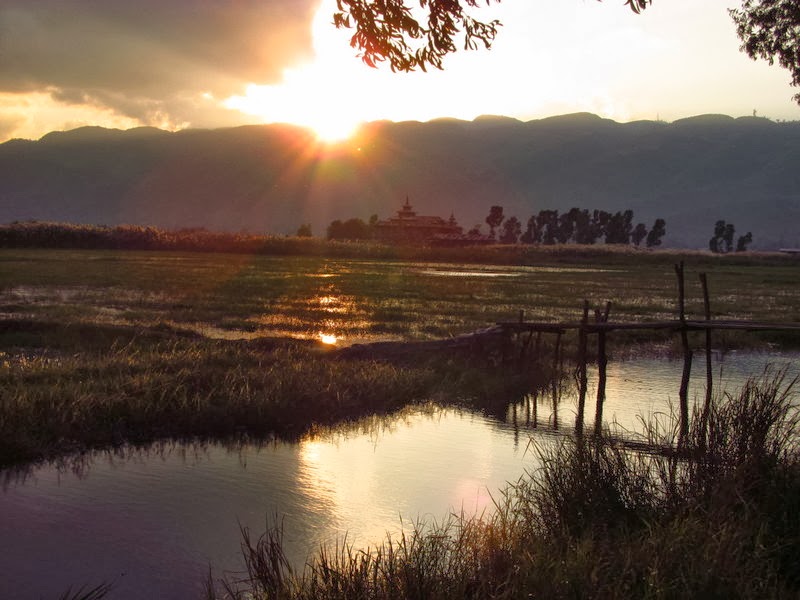 I thought Burma was always a bit of a hot, humid country too – but night-time here challenged that view quite thoroughly. It was cold. Really cold. So I went inside and watched Burma play Thailand in the SEA Games instead – but I should have just sat outside and watched the grass grow instead. Half-time seemed like an acceptable opportunity to do a runner to a restaurant nearby called Wa Toat – where we were their first customers of the day.

Really good food too. It's not easy doing business here!

As for the $18 room – I could get wifi in my room, but not on my bed. This disappointed me. My first world problems always disappoint me, after all.

And the cold weather comment also applied to the boat trip: I could have done with a jacket on that thing. And one of those Burmese hats. And some suncream might have been a good idea.

The boat trip's fun for a little bit, but after 8 hours being sat there gets old rather quickly. As do the stops at the same commissioned shops; the routine of pretending to look interested, then leaving without buying any of the overpriced stuff inside might come in handy next time I'm in India. 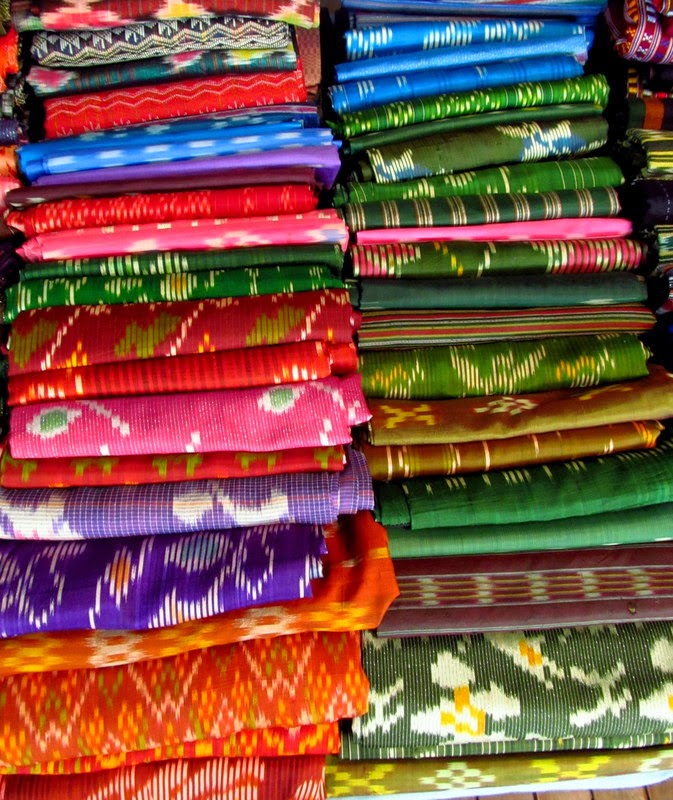 They didn't seem to mind though. It keeps the boat trip costs down though – and it's always amusing seeing the same people in several consecutive shops going through the exact same routine.

Oh, and local fishermen apparently row with their leg – but the “look around, see if tourist is looking, row with leg, see that they're not looking any more, row with arms” thing was mildly amusing. 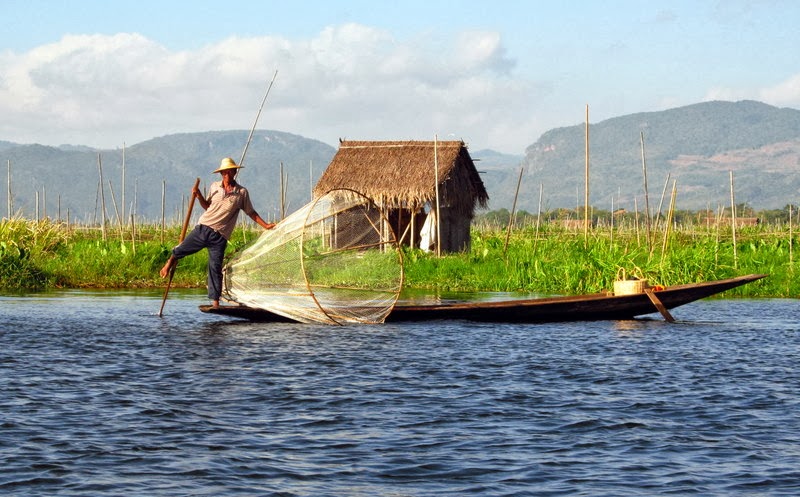 Makes a nice photo, I suppose. 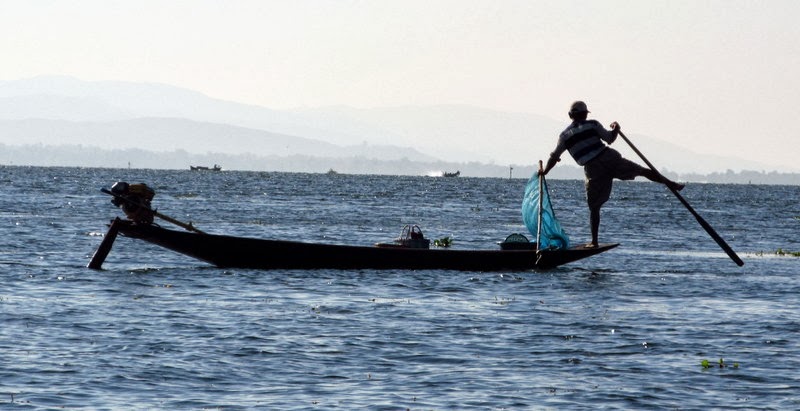 And they even have houses on stilts. Anywhere with houses on stilts is going to be pretty cool – even if your attempts to go and get some better photos just results in nearly falling into the lake, and getting laughed at by your boatsman, and indeed anyone else in the vicinity. 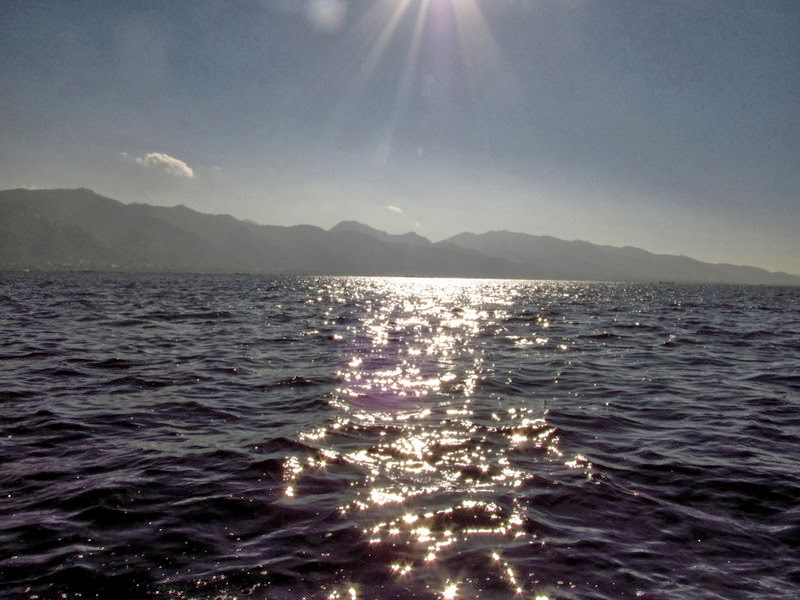 Oh, and whoever worked out that submerging bamboo across the channels acts as speed bumps is a genius. Fair play.

Having stopped at the requisite shops (sorry, “workshops”), we were dropped at Indein and told to have a wander in that general direction. Which turned into getting lost in some sort of tourist trap market which was probably the most pushy place I'd found in this country.

Judging by the quality of the haggling, I'm not surprised they try to pull a fast one sometimes. One Chinese tourist amused me by just shouting “Less, less! No, less!” at some bemused seller who clearly couldn't care less.

The pagodas at Indein are best explained by a photo:

Basically, imagine a giant board of nails, but the nails are pagodas. And golden.

And now, stop laughing at the poor quality of my metaphors.

There are real floating villages in Inle too. Where people live and stuff. 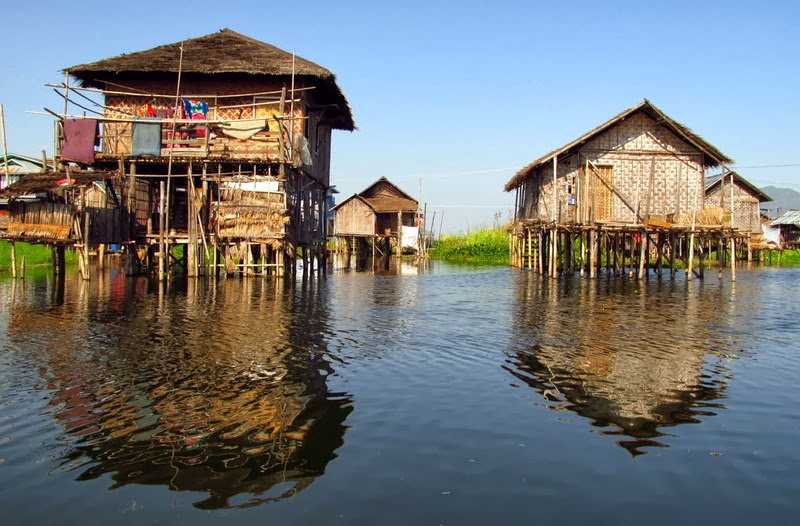 There's even a high street. Unfortunately, it's just got tourist restaurants and cigar shops on (what a great combination), but I still thought the entire concept was pretty cool.

And after 8 hours I was pretty sunburnt, and had to take an overnight bus to Bagan at 7pm. I thought it might be a good idea to book accommodation there – and this being the other stop on the tourist circuit, the cheapest was 15$. At a place that the Lonely Planet last year said would cost 5$.

I've ranted about hotel prices enough already. Less about that now. More about that....well, it won't take long, will it?

But yes, Inle. Nice, but not the heavenly wonderland that some people make it out to be.
Oh, and just take a half day boat trip. And see the sunrise in that. It's for the best.
Posted by Anselm at 13:20