Getting to Singapore: bus to JB, state bus over the border, go to Queen Street bus terminal, walk to hostel.

Yeah, if only things were that simple.

The border crossing was one from hell. First of all, I got the wrong bus – though for a few cents more than the state bus it wasn't too bad.

Then we got to the Malaysian exit post. Stamped out. OK, let's go get the bus again.

It was a bus station affair downstairs – and as I got down the stairs, I saw my bus leaving. Without me.

I had no idea where the company's buses left from, so I just stood there – waiting for a bus to appear. Which was at the far end of the station. So I ran, backpack and all – and he wasn't going to wait for me.

At least I knew where the bus left from.

An hour later, I wasn't so sure.

So I just went and found any other bus heading in the right direction. “Kranji MRT” meant I could take the MRT to Little India and the hostel, so I went for it – and it was cheaper than going all the way to Larkin. And it wasn't Woodlands, which was the border post MRT station.

Ah, got it. Singapore border post crossed, chewing gum smuggled in (they only cared about cigarettes) and a fairly friendly welcome, and I looked for a bus from the same company.

I know how this works now.

Except Kranji MRT was actually further away than Woodlands, and required an hour's journey stood up in a silent carriage. I couldn't even chew gum to pass the time.

At least it's straightforward enough, even if when I left Little India station it was tipping down and my flip flops, weathered by the Thai border post experience, really didn't approve of the slippery pavements.

So I settled in, avoided complaining about $5 beers, and enjoyed some “Australian steak with gravy” affair that cost me far too much. But it was blooming good. And the hostel was called the “Prince of Wales”, complete with requisite Welsh flag. I approved.

And my first full day was a Sunday, and I inadvertently went to church. 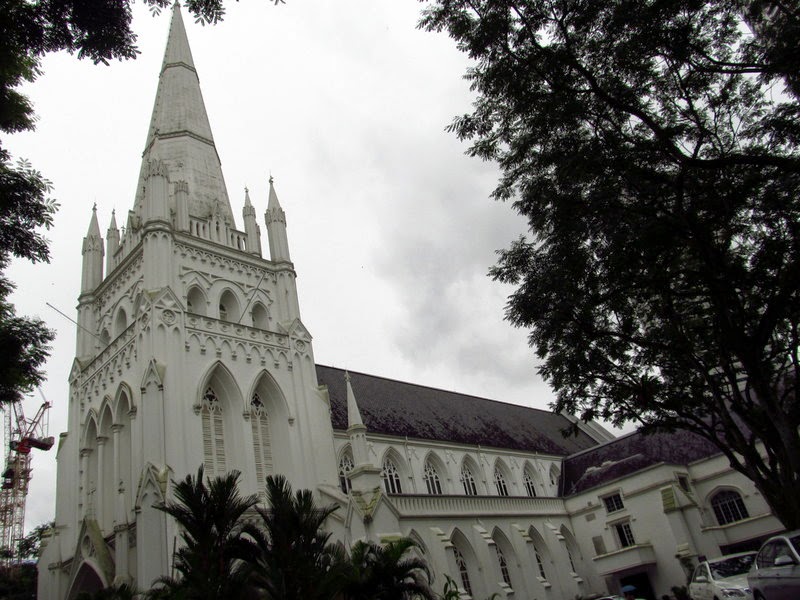 And stayed for a bit too!

Then the monsoon rains decided to say hello, and it was time to see Singapore in all its dull and dreary glory – skyscrapers, skyscrapers and more grey.

Even beneath the skyscrapers and dull environs of the city-state, there were still some elements of Singaporean history: the waterfront shophouses that would have looked a lot better if it hadn't have been tipping down with rain. 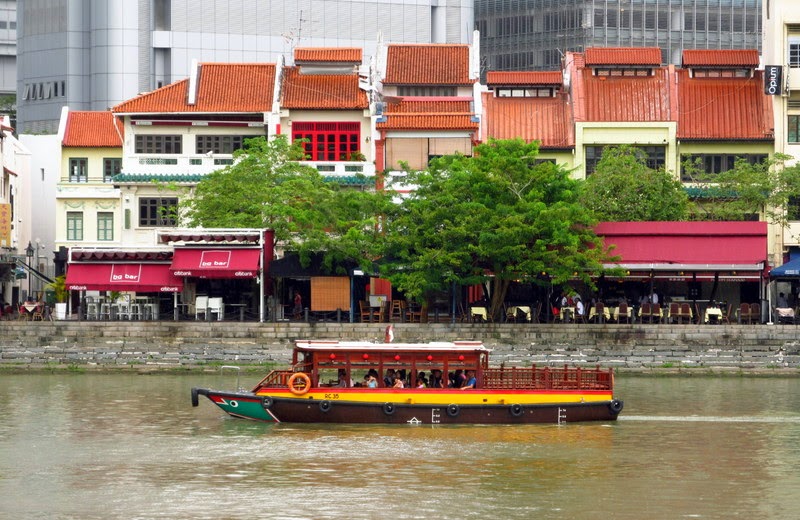 And there was a Russian family there, the father filming while the mother read out of the guidebook.

Yeah, who watches these videos?

By the looks on their faces, the poor children are forced to.

And I made friends with some locals, who took this amazing photo of me. 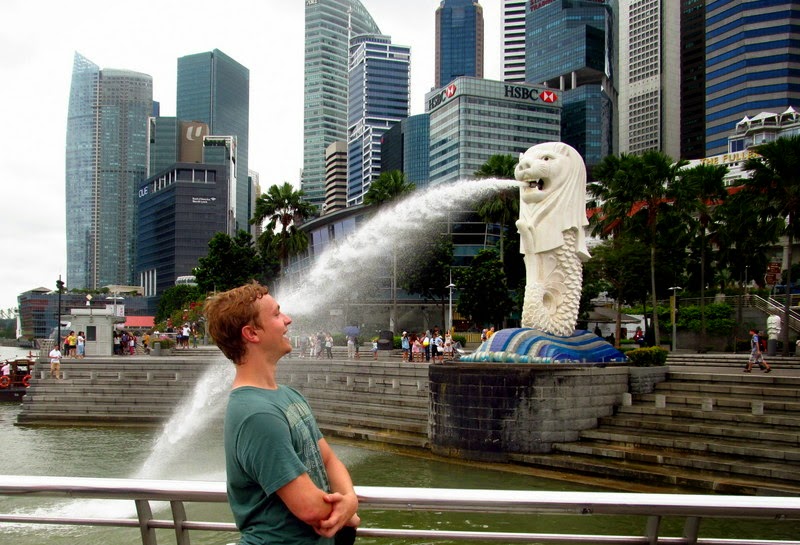 By this point, I needed my aircon fix again, so it was time to jump on the MRT to Chinatown, and enjoy some hawker food for the first time in a while. 5$ meals? Yes please! So I avoided the more touristic parts for a bit, and saw more shopfronts. 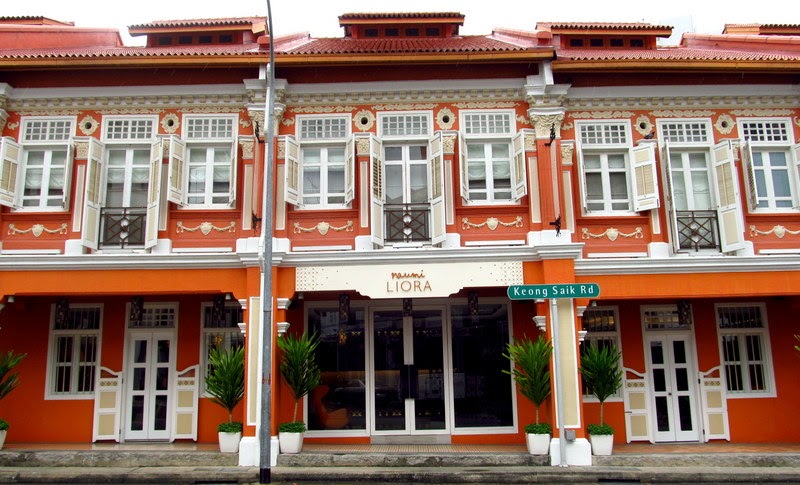 Then eventually I had to hit the Tourist Central which is Singapore's Chinatown, Inc, and of course the tooth relic temple. 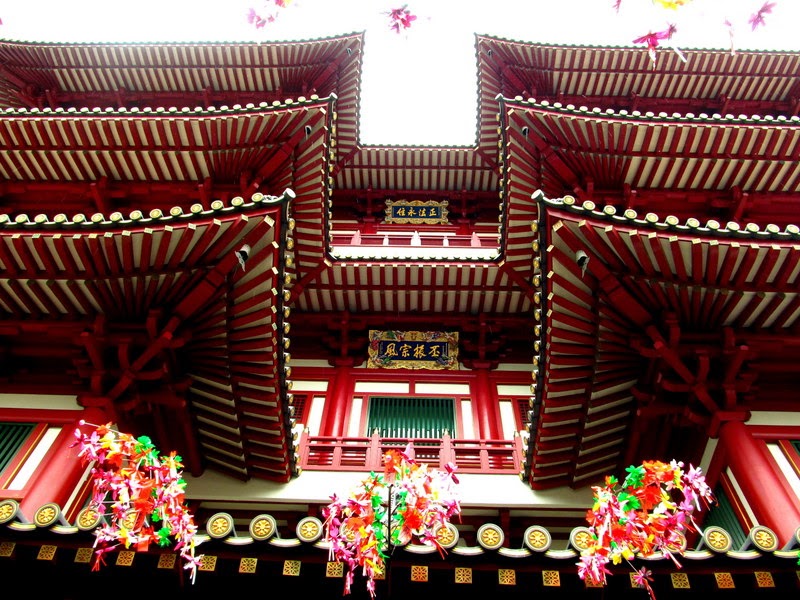 Yeah, I can't see any tooth in there.

And there was a Hindu temple in Chinatown. Yeah, makes sense. 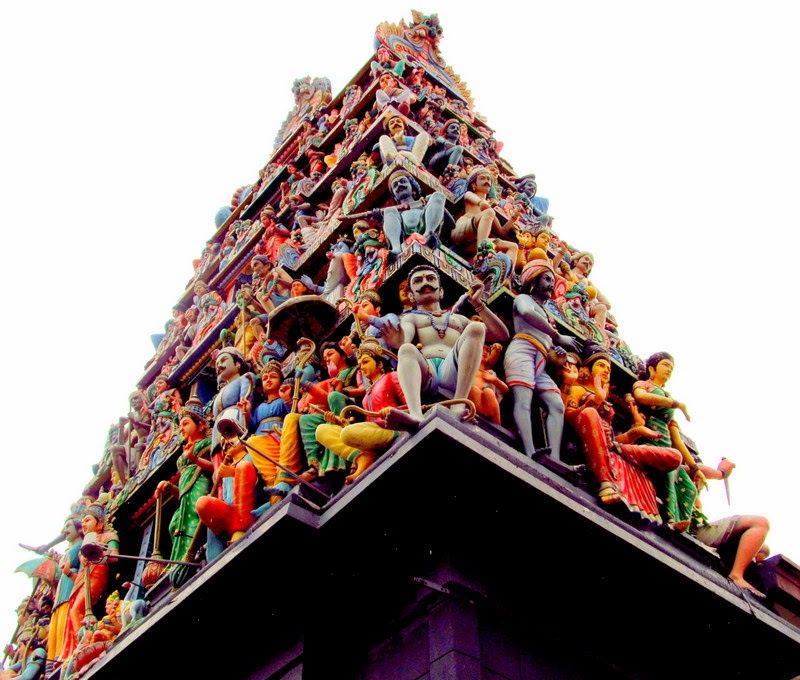 Eventually I had to go into some backstreets and hide from the usual tourist mecca that has so annoyed me so far, and I found an actual Taoist temple. Taoist temples are the only ones that seem to welcome you in with shoes on. Staying in tune with nature, this is, apparently. 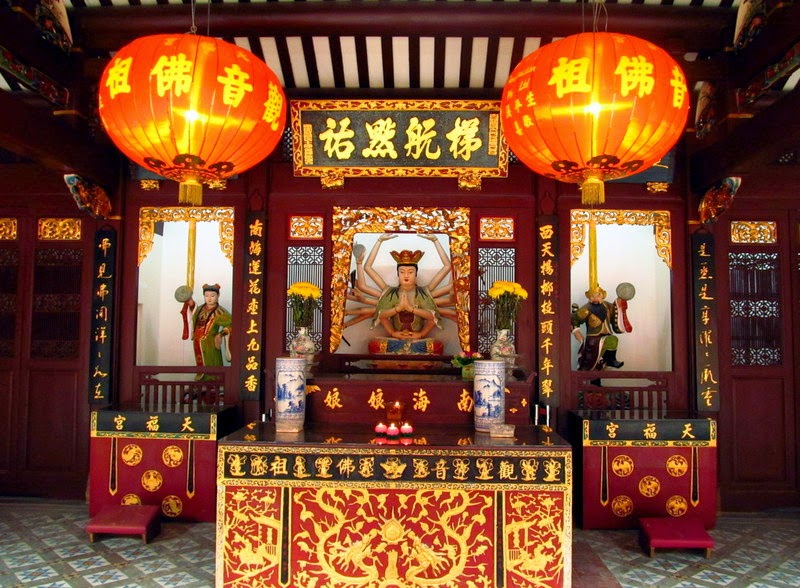 OK, time for more modern stuff. Singapore is that kind of place, where I can just swap and change my mind as I wish. 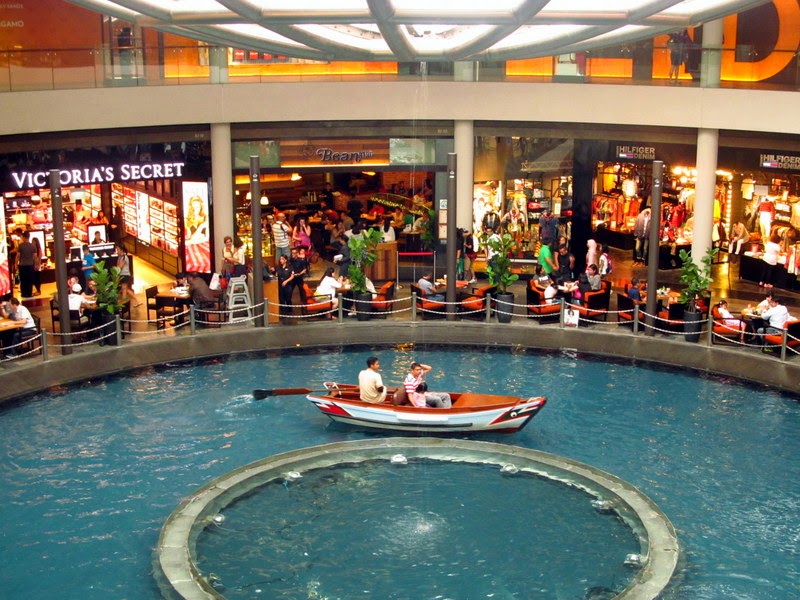 I know this because the MRT deposits you in a shopping centre. The “only shopping mall with a UN membership” thing rings far too true.

Then of course I decided that I was having severe travel ADHD, and needed a mix of the two. Clarke Quay will do. 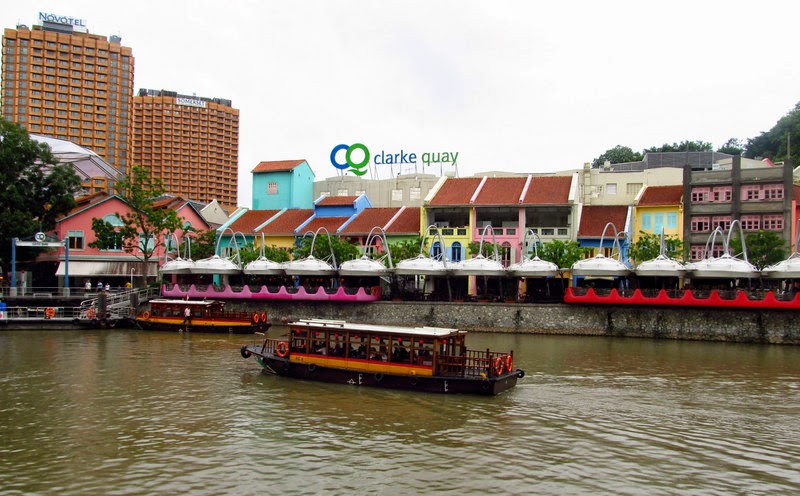 But by now, yesterday's border antics had got the most of me and I needed to sleep, before a bit of an evening photo session. 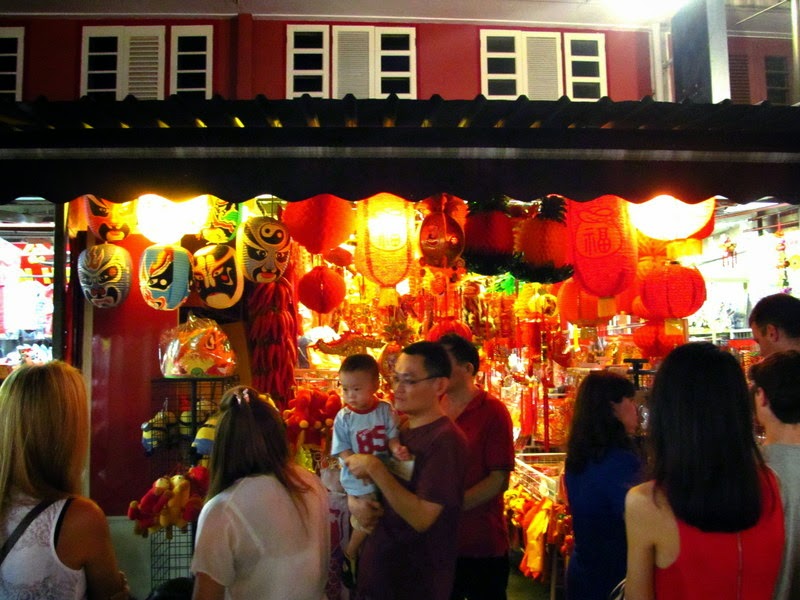 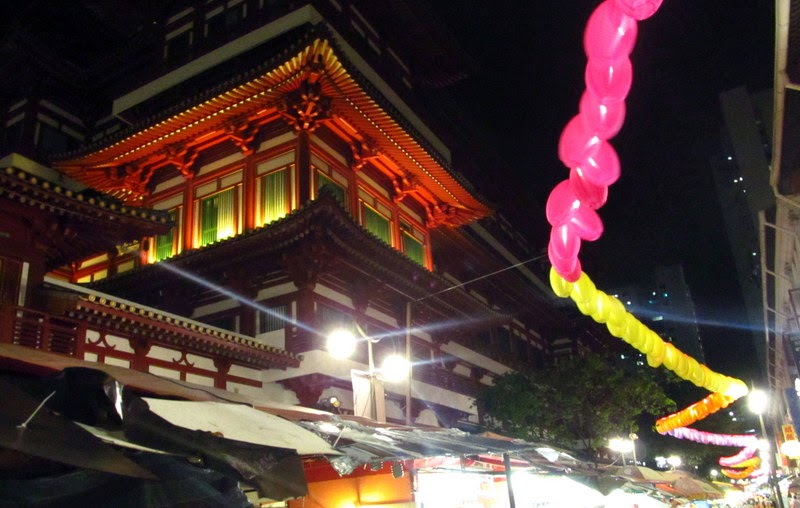 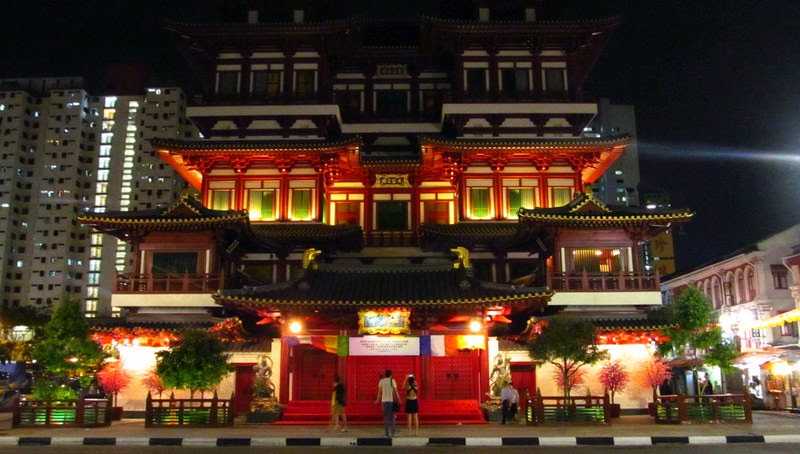 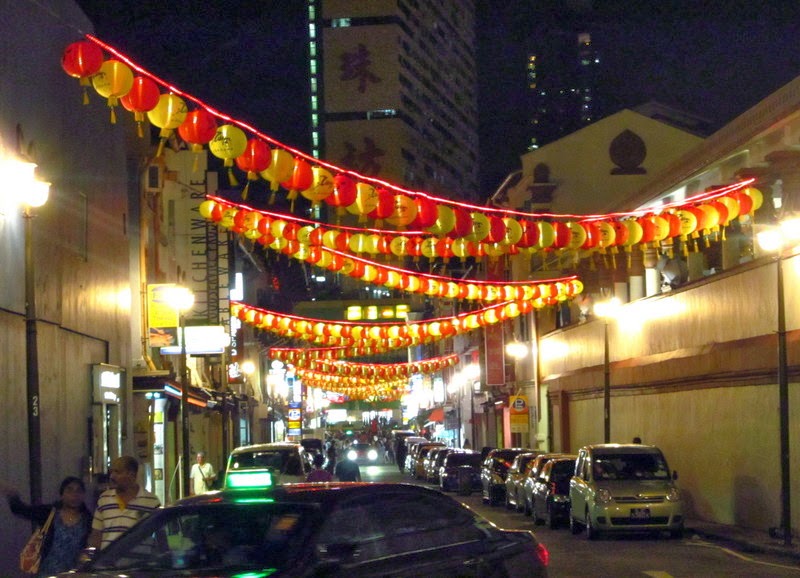 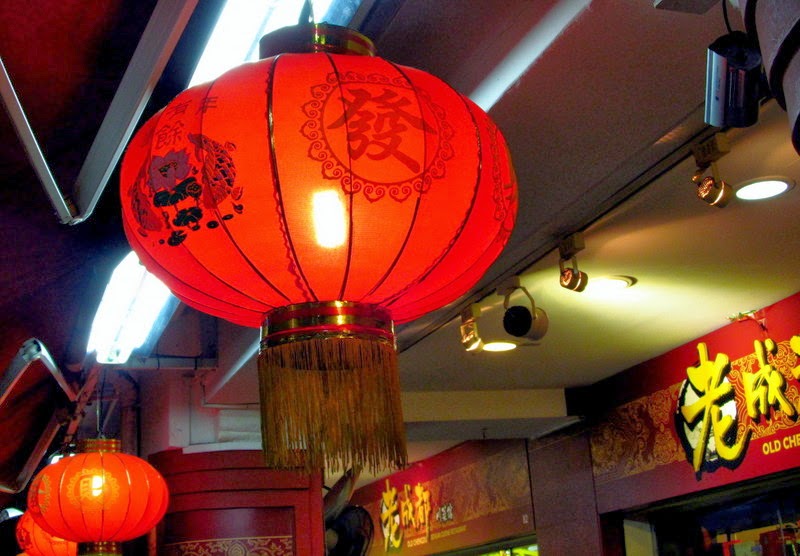 And in the end, hardly any of the lights were on. Ah, Sunday night. 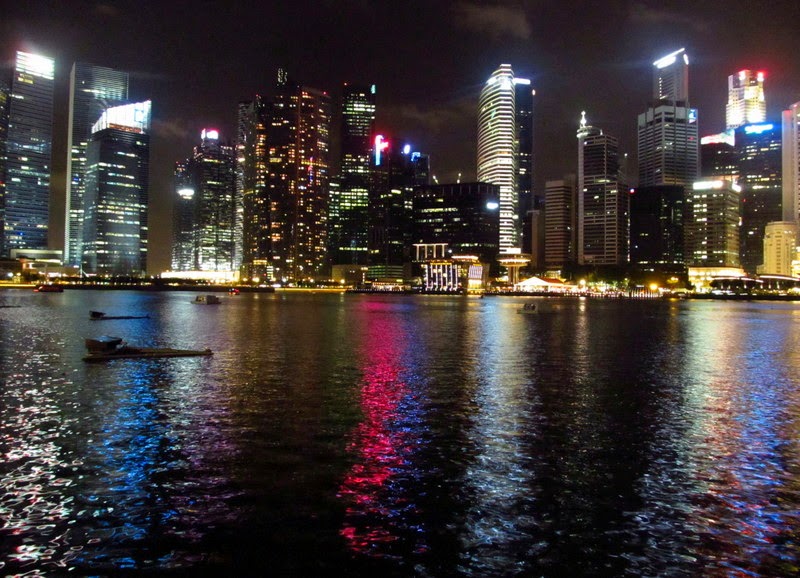 You know what? I ran around Singapore a lot, deciding I wanted to see something new. But Singapore provides: for a small city-state, it has a lot to offer, and with the MRT you can engage in travel ADHD to your heart's extent.

You can also give the place a good wander, even if the humidity of the monsoon season made me want to dive into the nearest shopping mall every now and then. And there are plenty of them too.

There's even these two gems in, appropriately, the Arab Street district: 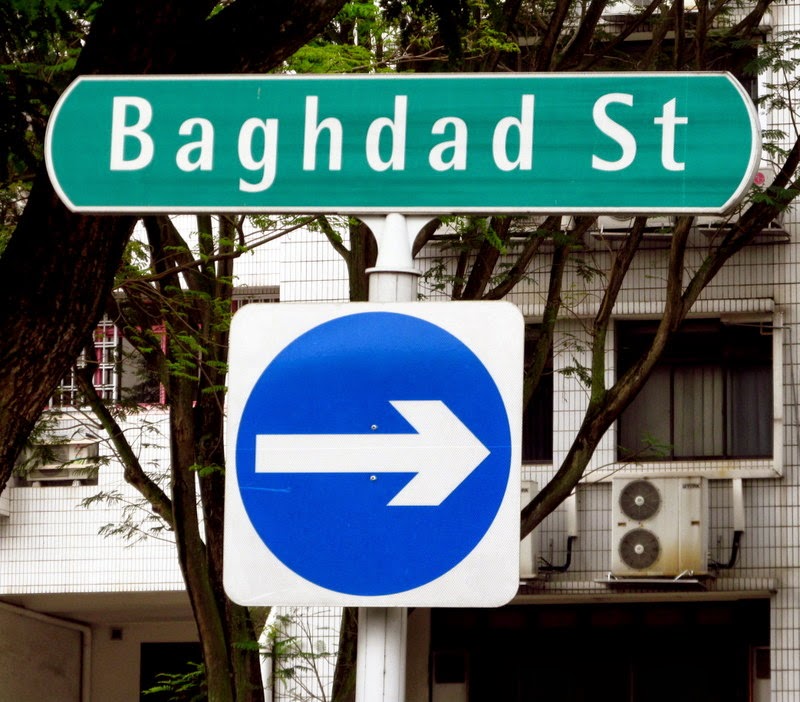 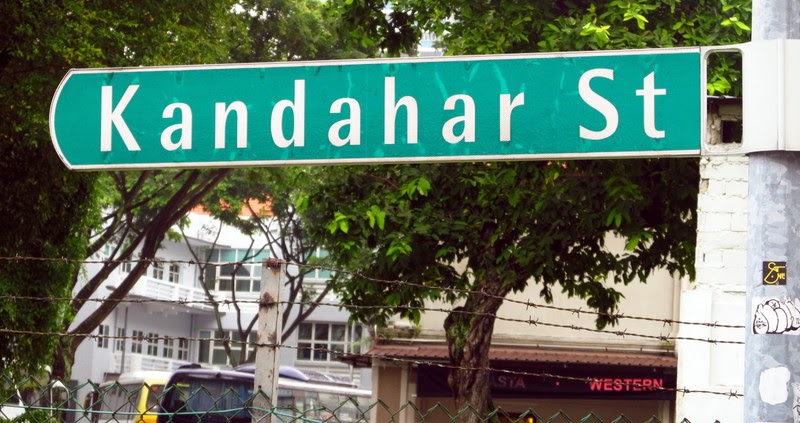 So much culture crammed into one place: Singapore has history and a whole lot of diversity.

So much that I took the MRT over to Orchard Road – and they actually pronounce “Somerset station” with a Somerset accent.

But of course the monsoon rains had started, and so I had to hide inside...... shopping centres? Plenty of them here.

But getting in is always easier than getting out: there's a surprise.

After a couple of never-ending escalators, I found some sort of roof garden, and about 3 people in total. Wonder why that is.

You know what: I like Singapore. There's something about it, in the diversity, in the crazyness, in the nutty nature of the ruling classes, that just shines through, and makes the place slightly awesome.

Even if it is a little too expensive.

At least you only need a couple of days to explore, and it's a fairly standard stopover – so a lot of people will end up there at some point, and half of them will probably hate it – but there you go. Cities are a bit hit and miss like that.

A fine way to end one hell of a trip: Australia's up next!


I'll blog a bit about my experiences there, even if I'm working quite a bit – and I've got a fair bit of miscellany (read: mind-vomit) to share (read: bore you with). So keep your eyes peeled for it!
Posted by Anselm at 10:29