Rise of the Unpronouncables, part 2

After Pyin Oo Lwin, it was time to head to the second unpronouncable: Hsipaw. Hsipaw's a Shan town in the hills, and I was thinking of doing a bit of trekking to some villages nearby at one point. That was before I was ill, however, so it now seemed like a good place to do absolutely nothing at all except for eat, drink, and sleep.

Talking of sleeping: accommodation was $7 a night. For the first time, I'd found it below $10 in Burma. Simple victories.

But the journey was meant to be something quite epic, and so I was actually up at 6:30am to take a motorbike taxi to the station. 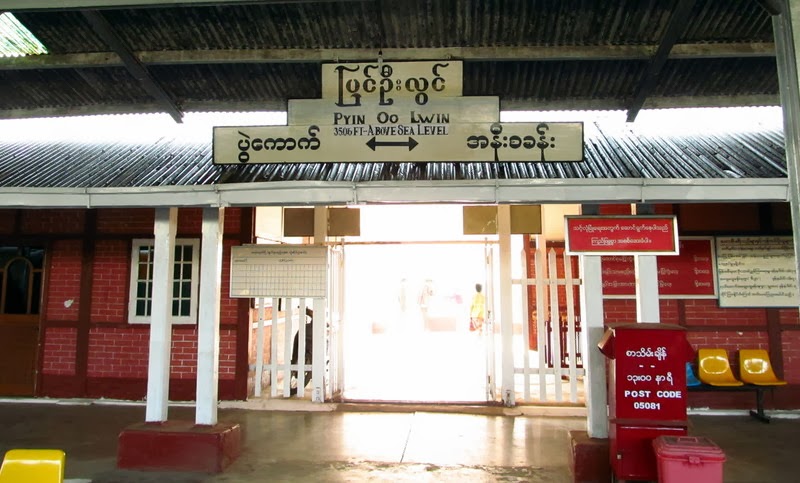 Well, I'm not sure if it was an actual taxi or just a guy with a motorbike who was happy to make 1000 kyats off me, but there you go.

And the booking office wasn't even open for a while. Should have just grabbed breakfast first. Or I could have gone in between buying my ticket and the train arriving, but I was the stupid one who left it too late and just bought some assorted biscuits and other baked delicacies. 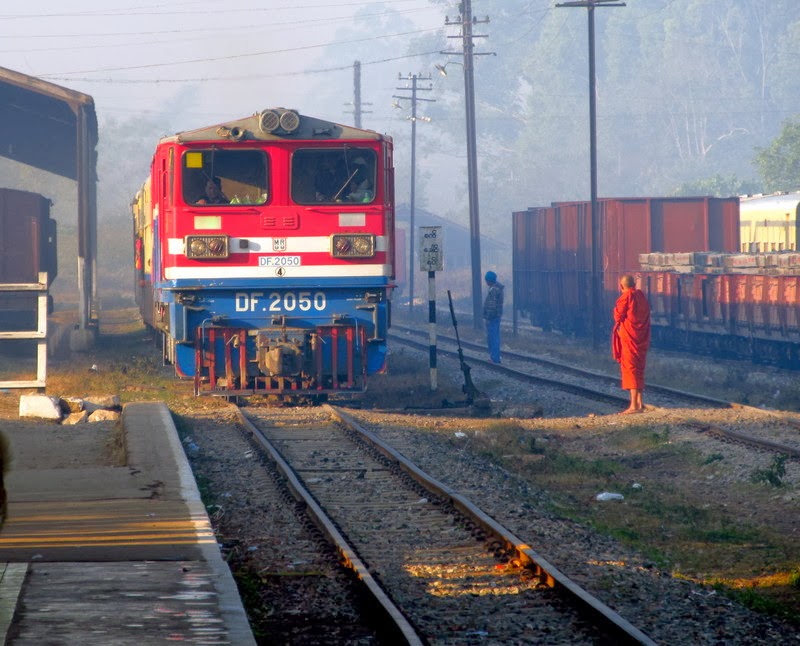 Oh, and in my tiredness I forgot that Burmese sweets are disgusting. The Danish guy from the night bus was also there, and was trying to get something cheaper than the 3$ train fare. I suggested he went on the roof. Or walked.

Seriously, why do people do that? Live a little!

I spent most of the journey hanging out of the door though, because I'm a nutter.

It is possibly the bumpiest journey I've ever been on – the trains swing from side to side, and the doors like to knock you out of the train by closing on you from time to time.

Thankfully the thing's so slow that you can just sprint and jump back on.

If you don't get caught in the undergrowth that is. The train seems to disappear into it from time to time. 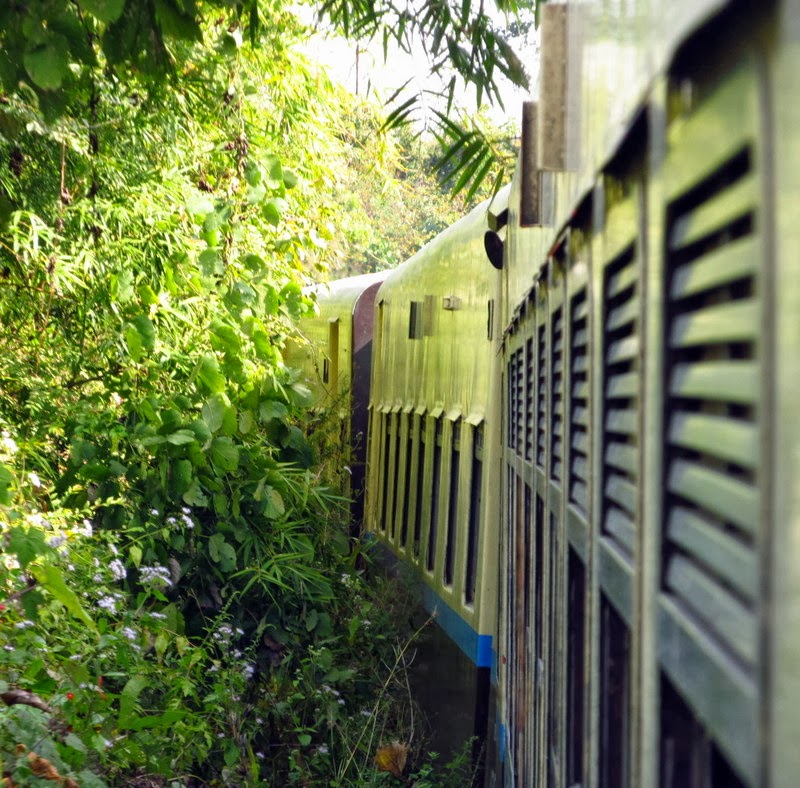 Still, when there's a gap, everyone in the vicinity waves at the train.

I still love the Burmese.

It's a long, slow journey, with a lot of stations on the way – though that was a good opportunity to eat and ingest some caffeine into my system, both of which were badly needed. 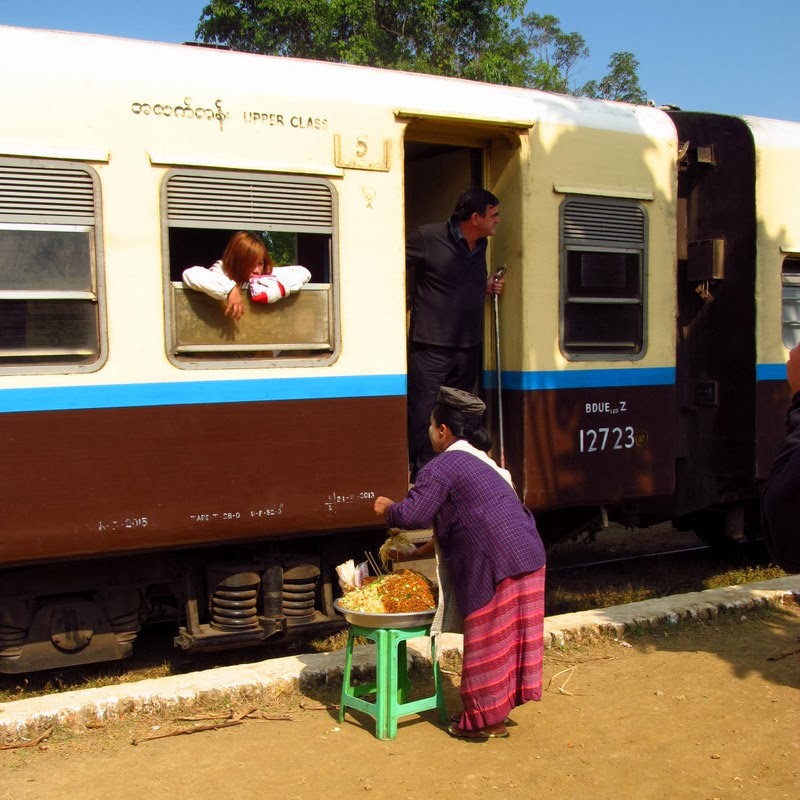 Then we got going again, and I caught a glimpse of it. 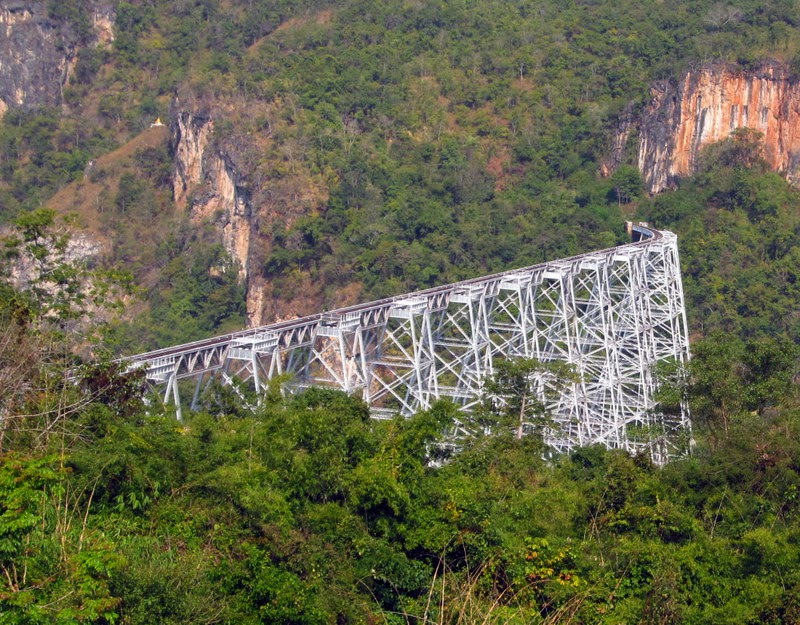 The Gokteik Viaduct is what makes this journey. It's an incredible feat of engineering, a viaduct put across an incredibly steep gorge, and something that I really didn't appreciate until I actually saw it.

The Eiffel Tower school of engineering never did so well.

The train winds its way down to the viaduct too. There's a terrific sense of adventure, of journeying, of history. 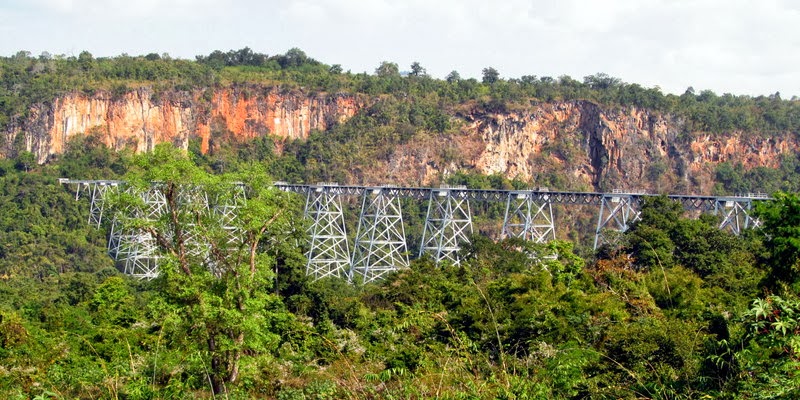 It just gets closer, and closer.

Then the train slows down to a crawl, so the bumpiness doesn't damage the creaking viaduct.

Because putting down new rails is too difficult.

And then, there it was. 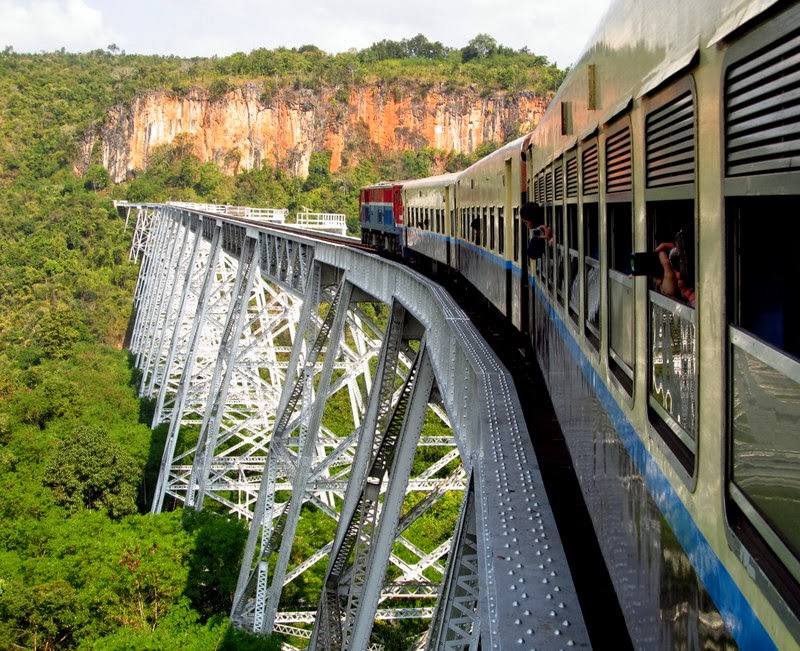 It's truly something that has to be experienced.

And in my case, I tried to touch the viaduct with my feet – and ended up losing a sandal off the side of the thing. How clever of me. Maybe the viaduct needed some sort of sacrifice in order to not fall down though. I'm not sure how these things work – and some Buddhist guru is about to slap me round the face, I can just sense it.

Eventually, after what seems like a lifetime, you get off the thing, and start heading into the Shan hills for that long journey all the way up to Hsipaw. 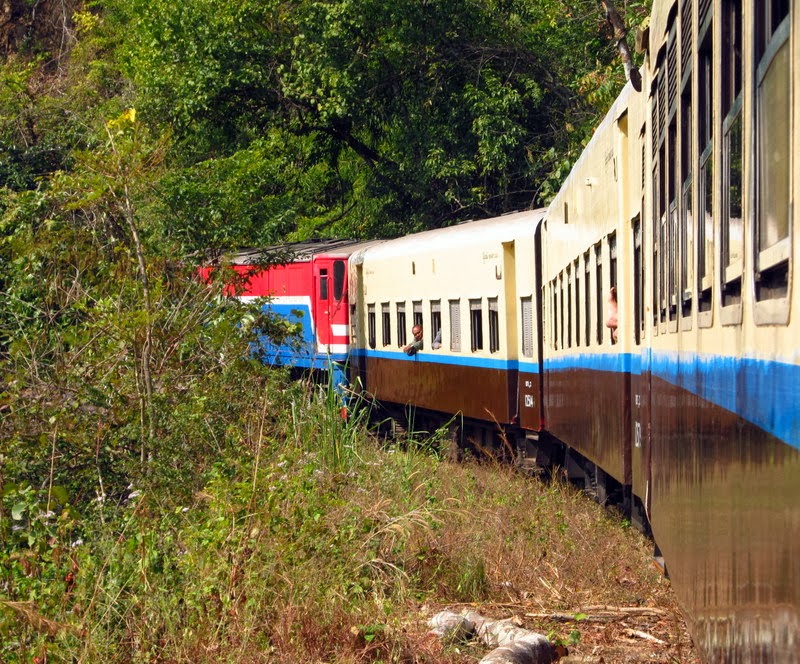 It's still a while away yet!

By this point half the train realised that I was crazy, and a Czech guy had worked out that I was Welsh on this basis. Personal victories, eh?

I even had to chase the train down the platform because I was buying some more food and the train started to pull out of the station. Definitely crazy. Never seen someone count money quicker than the poor seller who was trying to give me all of 40 cents in change.

And it got so bumpy that my bag flew out of the luggage rack. I was quite impressed. 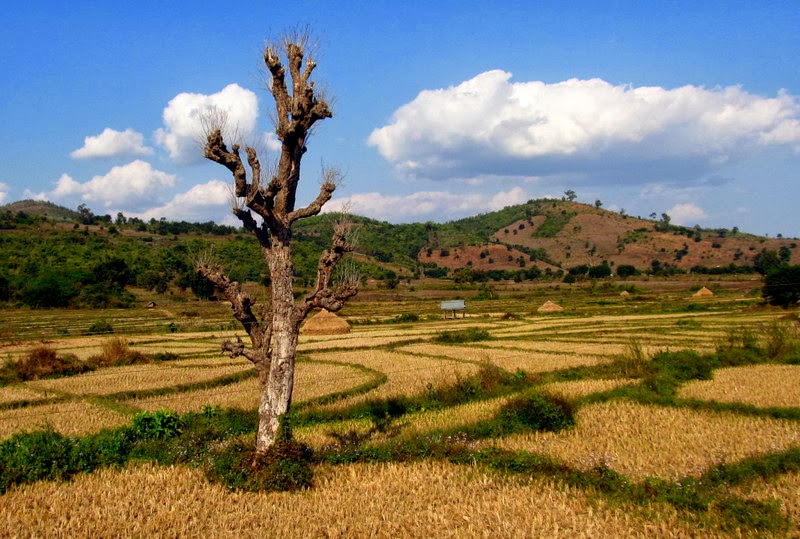 At about 3pm, after a good 7 hours on the train, we finally pulled into Hsipaw, and got accosted by a number of guesthouses. I went for the one that would have people in it, since I was planning on doing nothing for the next 2 days.

It did indeed have people in it. I met a German guy who I'd met in Bagan, and who thought that I was Waleisch. Yes, Waleisch. Those Germans. I also met a Kiwi called Ben – and given that us Brits, Aussies and Kiwis share the same dodgy sense of humour, we naturally got on like a house on fire. And my jokes were probably as cliched as that turn of phrase, but it's not like I care that much about such things.

He was leaving on an overnight trek – my original plan – and if I hadn't had been so ill, I would have joined him. But I let him make do with some Yanks and Germans instead. Poor guy.

So we had a few beers, talked about who knows what, was convinced that I should go to Indonesia (as if I needed convincing) and then headed across to Mr. Food.

But Mrs Popcorn doesn't actually sell popcorn, and Mrs Boat is a restaurant. How disappointing.

The Czechs turned up too and drank the 600 kyat draught beer as only Czechs can.

At some point we realised that we should probably leave, but we decided that we should visit the shop with some weird, brightly coloured, plastic toy animals on the way back. Except that these animals seemed to actually be hybrids of a couple of random animals.

The staff seemed happy for us to laugh far too much at their products, and even demonstrated what they were. A hen, apparently.

Yes, I saw a grown Burmese woman do an impression of a chicken. Be jealous.

Ben decided that it should be called a fishkin, and that actually it maybe wasn't a good idea to buy one.

More food the next morning. The hostel breakfast was good, even if I've forgotten how to eat a breakfast buffet in the past 3 or so months.

And so I settled into my original plan of doing absolutely nothing, only punctuated by returning to Mr Food and drinking beer on the basis that it was the cheapest drink in there.

I did learn how to ride a motorbike though. It's really easy. Rented one and took it up the road to Lashio until I hit a toll booth – at which point I turned around. Fun fun fun.

Just don't get yourself blindsided by a lorry though. That's not so fun.

My days in Burma were coming to an end, and while I was ready to leave on such a high, I knew I'd be back. An incredible country that rose to the top of my favourite countries list very quickly. There's so much more I need to see!

Oh, and Ben was seriously tempted to buy the fishkin. Also highly amusing.

But the return to Bangkok was nigh.


There's always a return to Bangkok though. We've been through this already.
Posted by Anselm at 14:13