It was pretty much dark by the time I'd actually headed out into Rangoon, the former capital of Burma. Or Yangon, as they call it now. But Yangon is a ridiculous name, so I'm going to go all colonial and suggest that we did something right: naming the place.

Like Myanmar. What on earth is that for a name?

I'd been told not to change money at the airport, and that you needed pristine US dollars. Obviously taking in notes covered in writing and rips wouldn't get you far, but they didn't seem too fussed – and the airport rate was pretty much putting the black market changers out of business.

Opening up, this place is.

Though as I headed into town, I felt some remnants of the old regime: it was eerily quiet. At traffic lights: silence. Engines off, no noise. Maybe it's because of the dark, or maybe it's the government – but it was so quiet.

But of course the international topic of conversation, football, broke the silence.

And eventually I arrived outside the place I wanted to stay - they had told me to just turn up, as they didn't take reservations.

As were the however many other places I tried.

It wasn't just me though: I was joined by Sara, an Italian girl, who also couldn't find a place to stay.

The issue: it takes about a year, and probably connections/bribes, to get a licence to take foreigners in your hotel. So it only makes sense to set up a luxury hotel, and for the cheaper places, to hike up their prices.

So in the end we had to split a 30$ twin room. I was hoping to pay less than 10, but at this time it was the best we could find.

And I was flipping hungry. But I discovered at this early stage that everyone here goes to bed by 9pm, and the only place that I could find open served fairly anorexic portions without much in the way of taste. So it was Anorexic Chain Restaurants Ltd for dinner.

Plus they gave us a small pot of chilli. But I didn't know what it was, so I just chucked it on in the hope of adding some flavour.

And they'd already closed up the till by this point, as it was well past their bedtimes or something. They were allowed out until 10pm – they're big boys now. So no ice cream to ease the pain.

Facing this kind of cost, I changed my plans a bit and searched for a bus that would take me to Bago. So the next day I walked all of a mile to the train station – but it was so humid that it felt like I was literally walking up Kipling's Road to Mandalay.

And having never read the book, that's probably not a relevant reference at all, but there we go.

And it left at 3:30pm, so I had about 3 hours to see Rangoon – nowhere near enough, even for a place like this. It warrants a good wander, this city – it's one of them.

Shwedagon Pagoda it is then.

It's golden, big, and looks nice. Sounds like a good reason to visit, even if there are gold stupas on every corner in Burma, and even if I can't pronounce its name.

Made getting a bus there fun. Even the bus company inspector didn't have a clue.

Eventually I got on and paid 100 kyats for the privelige. A taxi would have cost me 2000. Though my legs were even more squashed in than in Nepal and it dropped me off about a mile's walk down to the pagoda. This required that I utilise the road-crossing act of pray and run far too often. 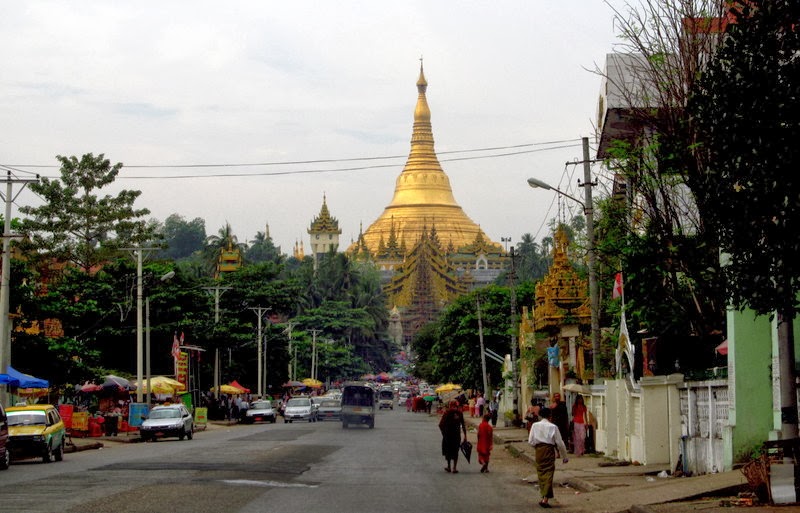 And I had to pay 8 dollars to get in, because the government want to soak us rich foreigners as much as possible – but given that the country's dirt cheap, it doesn't really matter in the grand scheme of things. It's just hotels and tourist attractions that cost far too much – though, to be fair, it took me quite a while to realise this. 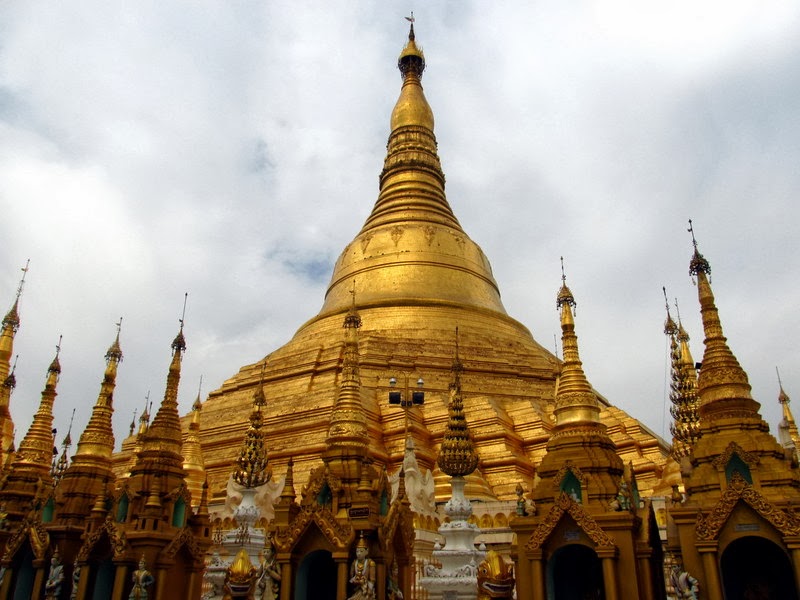 Then the sun came out and made it look even more impressive. Incredible thing, the stupa is. 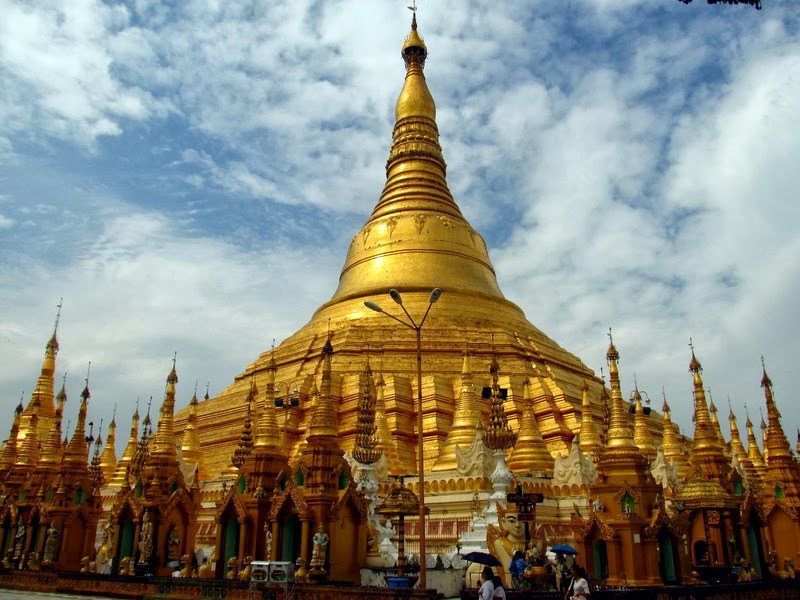 Plenty of Buddhas to go round too. 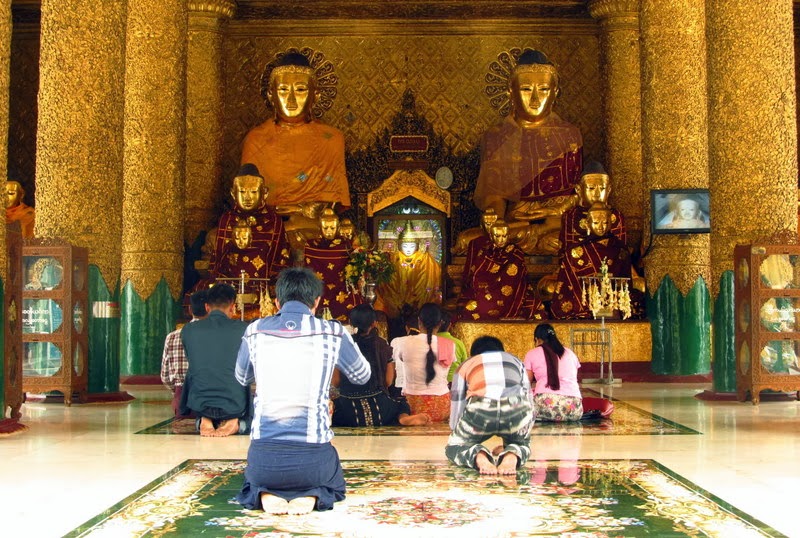 In fact, Buddhists really know how to build their places of worship, fair play to them.

But of course if my stomach rumbles, everything must stop, and then, I might actually take a taxi. Which I got for 1500 somehow – I guess because the guy needed to pick up his daughter from school.

Thankfully the choice of restaurants at 2pm isn't limited to the Anorexic Food Company, though there weren't as many as I'd expected. Had a decent biryani in the end before I headed off for a wander of the old colonial district in the small amount of time I had left. 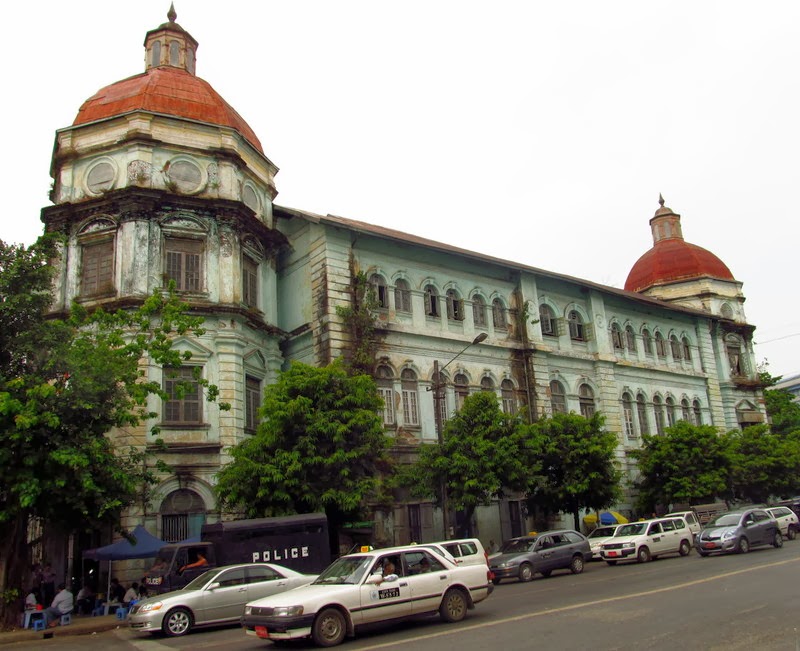 And got shouted at for taking a picture of the British Embassy. My own embassy. Sort of thing the Americans would do.

Actually, the American embassy would be a massively oversized compound well off the main street, but there you go.

Oh, and the Strand is quite cool. 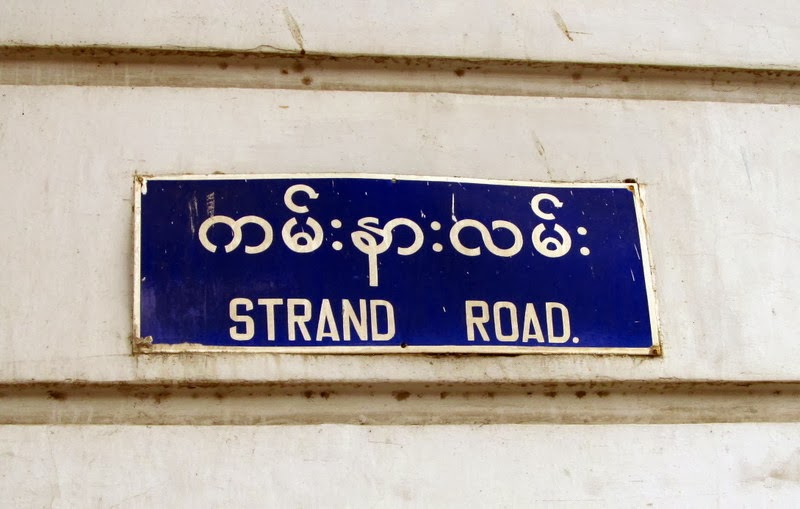 But it all felt a bit busy, a bit too much traffic and grit and not enough character. Maybe I didn't give the city enough time – people who spend a good few days there seem to like it – but I had to leave. I'd booked an early afternoon bus.

So I headed back to the hotel at about 2pm to pick up my bag. My bus was at half 3, so I planned on taking the city bus for the 5km out to the station, as it would cost me just 200 kyat rather than 7000.

No, that'll make you late. You'll need a taxi. Even that might not arrive on time.

So I grabbed a taxi, but 3:30pm became more unforgiving by the minute.

Eventually I got across to him that my bus was leaving NOW, and his first response was to drive a bit faster. Which isn't so easy in Rangoon, where traffic lights will hold you up for 3 minutes at a time.

But he had the number for my bus company. Phone out, rang them up. On several numbers. He nearly had a head-on when he didn't see a red light – and wow, those brakes screech on those old Burmese cars!

I never tip taxi drivers. In fact, I never tip anyone. But this was one of those rare exceptions.

Still, it took over 90 minutes to travel 5km, and that's fairly ridiculous. Welcome to Burma, eh?

And I got on the 4:30pm bus right away, just in case. After that ordeal I bought myself some preserved sweets to keep me going – and how I needed them!

Except they were disgusting, and incredibly pungent. And I'd ran out of water to wash it down.