I haven't posted in nearly a year.

Part of the reason is that my laptop screen got buggered on the trip up the west coast, and 9 months later I still haven't got that fixed. Because I've been so busy travelling.

9 months ago I arrived in Darwin "for a couple of months". I still haven't left. Everyone else seems to have - even half the locals disappeared for January - but survival of the fittest or something.

I'm still a traveller at heart, and there's still a lot of Australia left to explore - an awful lot, and I could even do with going back and seeing some of the bits I planned on seeing out west but wasn't able to. More on that later - when I have some sort of device I can upload my photos on to. Give or take Australian internet, which ranks next to that of India for speed. 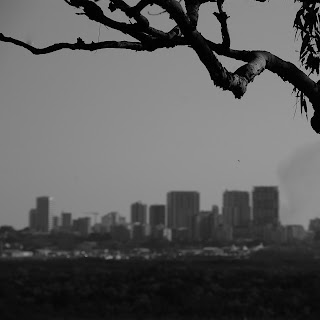 But sometimes it's good to stop and settle for a bit in a place you like - even if it's the anything-goes frontier town of Darwin. Sorry, capital city of the Northern Territory. Sorry tourism authorities.

In all seriousness though, I do like the place. Even if I get fed up of being stuck here from time to time - yes, I'm still a traveller. And with less than a year left on my working visa, I'll escape to somewhere else at some point. But who said travelling was about constantly moving around? I've made that mistake enough, moving too quickly, not experiencing a place - but sometimes you only understand a place by living there.

Not that I understand the attraction of Carlton Dry or Teds, beers so devoid of taste they insist on chilling them on ice - I assume so you can't actually work out what it tastes like.

Nor would your local paper be the height of quality journalism, the NT News. What a paper. Totally reliable, never blowing up the real risk of a cyclone hitting. Of course not. Better not be trying to get baked beans from Woolies any time soon - no chance.

It helps that I've been able to knuckle down, be boring, and save some good cash - to travel more in the future. Don't tell the government - they think I'm on holiday. A working holiday. Something which an old friend summed up brilliantly - "you come out here pretending that you're travelling everywhere by campervan, always sunning yourself - but really you just work like a Polish person and spend it all on overpriced beer". Quite.

Though some people do seem to live out of their campervans, but we judge them. Or maybe we're just judging them because they're mostly French, but there you go. I'm allowed one stereotype, right?

So yes, the grand tour will continue. Yes, I'll fix my laptop. And the trip is not complete, as I apparently said at one point. All is forgiven, past me.

I still haven't made it to Litchfield yet though. How bad of me. If only I still had a car. Or one with an intact head gasket, in my possession.
Posted by Anselm at 03:04