The work of goblins, rather than men

So said Rudyard Kipling when he visited Bundi many years ago. But first I had to get there - and a 6 hour journey was surely going to be eventful, even by the standards of my journeys.

First: get back to Ajmer. Eventually I worked out where on earth the station was (in a different place to the one that all the others went from, and that I'd assumed I'd arrived at last time) and told an autorickshaw driver that no, I didn't want to pay 300 rupees to get there - I'll just pay 10 rupees for the bus. Even if it involved sitting on the exit steps.

OK, uneventful so far. But we're only 20 minutes in. I did my standard confused foreigner act of shouting "Bundi?" at anyone who looked like they knew, and several people who didn't (must have disturbed them from the very important act of staring or something) but eventually found one that was going that way.

We left the bus station and then, about 5 miles outside Ajmer, we stopped in the middle of nowhere. Half the bus got off and went to a counter next to it. As someone explained to me, I had to go buy a ticket.

But this is a state bus, with a conductor. So what's the point of the conductor then?

And then the Indian lack of change hit. 62 rupees and 2 chocolate eclairs in change. This means that a chocolate eclair is worth 2 rupees. It's official. It's real currency. The state bus ticket office gave it to me, so I must be right.

We stopped in a few places that I definitely confused with Bundi, purely because they were on the bus route and also in India. In my confusion, I forgot that I had just been ill and agreed to have some street food on the basis that the first one I tried was quite nice. But as always with street food, the first one's good but the rest are bland and fairly nasty. And I definitely didn't want the rice, which was even worse than I thought, but I made friends with some locals by donating it to them.

In the next place, they played the game of reserving seats - because queuing is far too un-Indian for them. Bags, agricultural produce, small children - everything was passed through the windows. Thankfully, given that I was too British to tell them that no, they needed to stop passing stuff through now, a local helped me out. And so I had to shut the window and roast.

As we approached Bundi (for real this time), a friendly local saw me and told me we were nearby. "This is the local jail, this is how you know you're in Bundi". Then after two weeks, I saw the first car accident in India, on the uncompleted dual carriageway just after the jail. Good timing, eh? And who knows how long they've been building that dual carriageway for.

Then there it was. And yes, it looks like it's growing out of the mountain. Built by goblins? Maybe.

I was half-tempted to walk, but I was feeling a bit ill and an autorickshaw said he'd take me up to the fort for 50 rupees, so I went with him instead. Even if we then had a slight collision with another auto on the way: cue a short shouting match and, thankfully, my auto driving off rather than having a punch-up, as sometimes happens.

Got dropped off outside a hotel. I know the usual commission deal with these places, so normally I avoid them and find my own place, but I was ill, tired, and really couldn't be bothered. Even if it was 600 a night, it was a nice room and was right next to the fort. With a rooftop view of it too. Score. 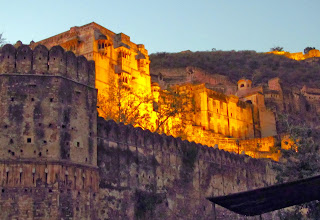 I could barely finish my thali as well. Maybe it's because it's also vegetarian, and I still can't find any meat. Maybe that's why I'm ill. I'm going to say it is. Suits my worldview and all that. My carnivorous worldview.

I wasn't feeling brilliant the next day, and I missed the 10am checkout - but I needed to explore the work of goblins after all. They tried to convince me to pay for the room for another day rather than just leaving my bag somewhere in the property (the room didn't even have a lock - no chance) but eventually I got out of there and into the palace.

Then I got distracted by 5 rupee postcards. And super-cheap paintings, which he asked for 100 rupees per day's work. That's £1 per day's work. And they were good too! Even if he was maybe exaggerating how long it took to paint them, he's still not earning a great deal. And he still gave me a lassi for my custom. He'll have good karma for sure. 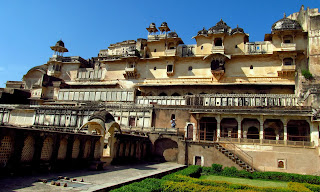 So in I went. It's impressive, even if, like Orchha, it's falling apart. Makes it feel more real. Though I'm not sure that goblins are able to paint as well as is found inside. 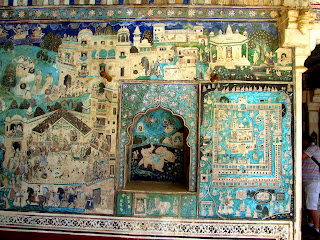 Good view over Bundi too - the place is very blue. Move over, Jodhpur. 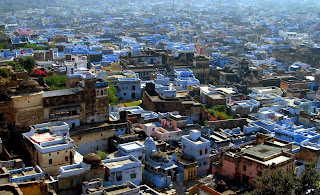 So up I went to the fort, which I'm fairly sure actually is made by goblins. Or the path definitely is at least, given how many times I nearly fell over. Oh, and it was basically midday by this point, which isn't exactly ideal for wandering up a mountain.

Dripping, I chucked some water over myself. This didn't entirely help the dripping situation, but at least I wasn't overheating any longer. 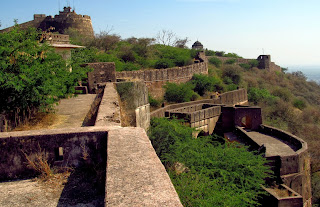 The place was overgrown. If the palace was falling apart, then this was a pile of stones - it was a proper ruin.

Which is where my 6-year-old self kicked in, and I went to explore. And got lost. And explored some more. And had to watch for stray animals, and scare off some monkeys.

After about 2 hours up there, I'd out-explored myself to the extent that the grammar on my blog is a little questionable, and I'm starting to make up words. So I attempted to make my way out of there - easier said than done. Eventually I made it to the gate, but no - a group of Indians saw white man.
So I practised my Hindi.

Turns out that the word for 14 is very similar to the f-word in Hindi, and that's why they were laughing at my pronunciation of it in Agra.

Eventually though I made my way down, nearly falling victim to the path more than once. Ah, going off the tourist trail, what was I saying about it again?

By this point I needed some lunch, but my stomach didn't want too much. I went to a place called Lakha restaurant on Sadar Bazaar. It was owned by a guy called Lakha. Original name number 67.

I thought scrambled eggs would be a good shout, but he didn't know how to make them. So I taught a cook at a restaurant how to scramble eggs, which was generally hilarious. He was a funny guy who showed me his book of pictures of previous customers, including a French girl who he told me he wanted to marry. Male nod of approval.

Ok, time for a wander. 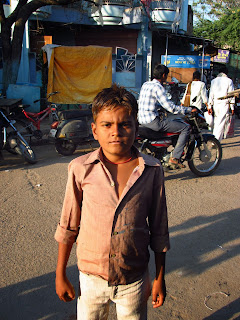 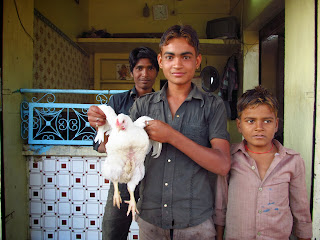 No, you've been in about five already.

Then a kid on a bike wanted a conversation. Normally it goes along the lines of
"Sir, what country?"
"UK"
"England?" or "United States of America? Obama!" (or on rare occasions, "oh, United Kingdom")
"No, UK. Wales."
"Is that in England?"
Silence.

"Are you married or unmarried?"
"Unmarried"
"Why?"
I don't know!

Important questions, eh. So I told him I was non-veg, to which the reply was that he didn't like me, and that I was dirty. How amusing. Well a few days of enforced vegetarianism has made me ill, so too bad. I'll just have to be dirty and unliked. I'll live.

I planned on going and seeing the sunset over the castle, on the basis that it made for good photos. Unfortunately I just can't help but be accosted by people in art shops, and if you sit there and drink chai with them for a couple of hours then they reduce their "very low small-town price" by half for you. Yes, I've never heard that one before. 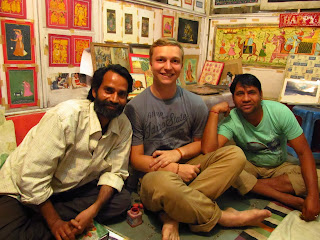 They were a good laugh though. Especially when he spoke about his kama sutra paintings. His poor wife.

So I continued in my search for meat, and went into a place on the basis that he had beer. But they still had no meat. And every restaurant can find you beer, even if they don't admit to having it on their menu. Normally they find it in their fridge, but there you go.