Of sickness and blessings

So after Indian food had won once, I thought that was it.

And I was on a bus. On a dual carriageway.

Though the reaction of the truck drivers who were looking at the aftermath on the side of the bus was quite amusing.

This journey was strangely uneventful. Though can I say this to the company who calls themselves "Unique Builders": concrete tower blocks don't count.

Ajmer bus station. We were late: of course. No, I'm not going to make the camel fair now - it's far too late. And to the various autorickshaws: no, I don't want to go with you, as much as it would be easier to pull over and throw up rather than repeat the exercise from earlier, you'd probably charge me for the privelige. Also, please stop lying to me and saying there are no more buses to Pushkar. It doesn't help your cause in the slightest.

Though it took several helpful locals to tell me which bus went to Pushkar, because the destinations were only written in Hindi script. When I could convince them to stop staring at me, and that yes, I could just about communicate with them, and no, I'm not from Jupiter.

Except that I had to chuck my head out of the window again, which just confused the locals. Yes, white man gets ill as well, especially in foreign countries. And an extra benefit: it stopped the guy sat behind me from spitting out of the window every 10 seconds. Didn't turn off his crappy phone music though. Indian chavs eh?

I had no idea where I'd been dropped off, but I had a map. So I ignored the various touts trying to get me to ignore my booking and go to their guesthouses, including a particularly persistent one who had a motorbike, and whose grasp of English seemed to mostly include swear words. And yes, you all say that my hotel is too far away, so please be quiet.

When I reached the main road I realised that following directions from the main bus stand was quite futile, as I hadn't been dropped at the main bus stand. I had no idea where I was going - and I was ill, tired, and not really in the mood for all this.

Then my new tout friend turned up on his bike again.

OK, I'll give you a lift to your hotel.

You know where it is?

Of course he knew where it was.

It was next door to his guesthouse.

And his guesthouse was actually FURTHER AWAY than mine - quite rich for him to say that MINE was too far away.

Having to fill out the various bits of Indian government bureaucracy was not exactly what I wanted to do at this point, and having to stay up another half hour for my passport to be photocopied didn't particularly sound like fun - but the receptionist went and got me a bottle of water, and asked if I needed medical help at all. No, I think I'll be OK.

The next morning I was feeling better, but still a little fragile. I was certainly in no mood to be messed around, so unfortunately I had to decline the first offer for chai as I headed into Pushkar itself. I know how that one tends to end, I'll give it a miss.

To the next guy: yes, I can tell that I will get closer to the lake by walking down the ghat, that tends to be what they're for. And no, I don't need a blessing, because you'll make me pay for it. And if you tell me to go back to the bazaar if I decline, then I will do - I can find another ghat where I won't be hassled.

So he just foisted the blessing on me and told me to "donate as you please". So I did, and gave him (a rather generous, actually) 20 rupees.

Oh they can whine.

So I told him to get over himself, which he seemed to understand. Quite a blessing, that one.

I had a wander of the bazaar, which was strangely calm for this country. Everyone wanted white man in their shop, but white man knew what he was looking for: some sort of t-shirt. I had one in mind, which essentially just had camels block-printed on it, and had a price in mind: maybe 250 rupees for it. It wouldn't exactly be difficult to make.

Oh, how much for 2? I can give you discount then.

The standard response when they know they've been had.

He clearly hadn't made white man profit out of me, as he invited me for chai - a great opportunity to try to sell me MORE t-shirts. Unfortunately I actually quite liked one of them, but he clearly realised that I wasn't budging on what I knew was a fair price. Normally if they give me a ridiculously high price, I give them a ridiculously low one so they know how it feels - but this time I wasn't sinking to his level. He didn't deserve it.

So after that brief sojourn, I had a wander around the lake. It's much more peaceful and rural on the other side, which I liked. Though my tout/guesthouse owner friend still managed to find me on his bike, and was still trying to get me to move to his place. No chance mate.

Oh, and there's a postcard shot from the other side. Score. 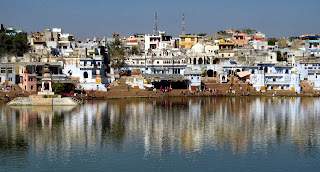 It's a fair way round actually - not the most fun when you're still a bit ill - and so I thought I'd stop and head into the Brahma temple, something quite rare. So rare that you can't take bags or cameras in - which doesn't stop everyone taking pictures on their phones, of course. Including of the deity which you're most certainly not allowed to photograph. Even white man knows that. And I was accosted. No, I don't want a guide. No, I'm not a guide, I'm a student of the temple. I don't want any money.

Oh, but you can donate to the charity if you like.

Of course that's how it works.

Especially when he "got me in touch" with a "priest" who took me down to the ghat and did the whole Hindu blessing ceremony affair by the lake, which was quite fun.

Until he wanted my donation. OK, you can have 100 rupees.

No, he wants "my currency". No, I don't have any of that, I don't have any use for it. No, 100 rupees is an "Indian donation", not a rich white man donation, because I'm obviously a rich white man. I should donate 1000 or 2000, because that's what all the foreigners donate. Yes, be quiet with your rubbish now. Then he claimed you need 1000 rupees to feed a family for a day. OK, maybe if you're breeding a small village of your offspring, or if you're dining at five-star restaurants, but otherwise that's a load of rubbish.

Then he asked for something for his family. Thankfully, he didn't want me to "get angry in a holy place", so I got away with that one.

No, I do not appreciate being tricked out of my money, even if I sort of saw it coming (classic me).

And as I went back up the ghat, the original "student of the temple" who "didn't take money" came back. "Anything for me?" Yes, you're a man of your word, aren't you? So I gave him a 50 for taking me round and he seemed happy enough. At least he wasn't a whiner, there's enough of them.

All this and it was most certainly time for food. A Tibetan restaurant sold me on the basis that they had momos, which I hadn't had since Nepal. And it was a proper hippie place - the kind where not having dreadlocks is a bit weird, and where they play pounding trance music at midday.

Even if it was veggie - because the whole town is veggie. And I thought having a veggie rooftop hotel restaurant was bad. Ah well, momos are momos, and I will most certainly destroy them.

Except I'm ill. I got about halfway through my plate, before realising that I needed to go back to bed like the old man that I am.

And I nearly missed the sunset.

On the way back, someone decided that I should give him 20 rupees for good luck. Yes, nice try. And no, I don't have any sterling - and even if I did, I wouldn't give it to you, because it's not for your collection, it's for the moneychanger's collection, and for more rupees in your pocket.

Pushkar's nice - fairly relaxed, not too ridiculous in terms of touts, and it looks good. Oh, and it's important for Hindus, so there's that factor too. I'll have to come back during the camel fair sometime. And when I'm not ill.
Posted by Anselm at 14:10