So having failed to find meat again, I now had to make it to Udaipur.

Well, I had to make it to Kota first. This totally confused the Indians who didn't know why I wanted to go to another station, when the train called at Bundi afterwards.

Put it this way.

So after going into and out of the bus station several times attempting to find a bus to take me to Kota, a jeep turned up. 50 rupees? Yeah, that'll do. Even if he had to stop to empty a litre of petrol from a plastic bottle into the tank halfway. I suppose they're recycling at least.

Except he didn't drop me anywhere near the station, and I had to take an autorickshaw to the train station. The joys. And given that white man fare is 100 rupees, and it's always "far away", then that's what I paid. To be fair, it was quite far away - though given the stupid fares I get asked for I don't know how much I should be paying any more.

I made friends with a policeman on the station, and failed to get a photo with his gun. But he was a genuinely nice guy, and I now have the number of a policeman on my phone. Friends in high places eh?

Except it actually arrived on time. The one time I wanted it to be late. I don't like 7:30am very much. Or at all.

I also got lucky with the autorickshaw driver again. I knew it would be a good sign when he was happy for me to go to prepaid (so I didn't bother), and then he got out a book of recommendations - just like Pradeep in Agra. He was surprised that there was an honest driver in Agra too, but there you go. Billu, take a bow.

Day tour? Yeah, sounds good. 4 hours? Even better. And today I can just wander round the palace and other standard central things.

And I actually found a dorm in India! 150 rupees as well, and I could move in at whatever silly hour of the morning it was right then. And have some breakfast and abuse the wifi. Even better.

Eventually I decided that I wasn't up for a nap right now, and that I'd go and explore the city palace. Except that they seem to do entry fees galore for exhibits WITHIN the palace complex - so I just got a ticket that got me into the complex for 30 rupees and had a wander.

A limited wander, it turns out.

So I just went for a boat trip. I like spontaneous boat trips.

We went past the famous palace on the lake, but it's kind of privately owned and doesn't want smelly backpackers like me turning up and pretending they might actually buy something - so I just got to imagine what it feels like to be rich.

Instead, we went to some other island, which I assume is government-owned. Government-owned islands, eh? I was hungry and it had a restaurant - but of course everything was overpriced here. Ridiculously overpriced. £4 was the cheapest meal (no chance), and it was 83p for a bottle of water. They're normally 20p. Also, 83p is far too random a price. But this is India I suppose.

But I needed a nap. Or alternatively I was hungry. Couldn't even afford a coffee though - so I just went with it. But all photos of me are terrible/hilarious/look like I'm pulling a face. So no, you're not allowed to look at them. They're for my embarrassment only.

Eventually we hit land again - and I ignored the various touts who wanted me to buy various items I didn't need. Especially the one who shook my hand, but held on and dragged me into his shop.

I just got up and left.

And no, I don't want any silk.

I was in search of food - specifically, meat.

Found it. Chicken tastes even better when you haven't had any in days. And I'm fairly sure that not eating meat made me ill. My argument number 1 against vegetarianism. Regardless of how awful an argument it is. No, I don't care. I dropped philosophy therefore it's OK.

Either way, now it was nap time.

And how I napped.

Nearly missed the sunset as well.

I need to stop making a habit of that. It never ends well.

Thankfully, the setting sun made a great excuse when people tried to get me into their shops and whatnot, especially when I told them that I'd been to India 4 times and that I was basically Indian. 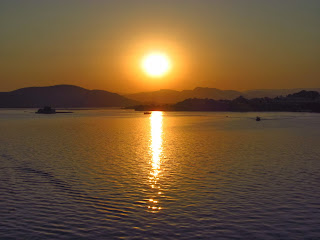 I was accosted by a guy who used to teach economics, who genuinely seemed uninterested in extracting money from me. And he didn't extract money from me - and actually he led me to a rooftop where I got an even better view.
And he took photos of me. What a guy. Didn't even get his name.

So back I went again - and I saw these two guys on a motorbike. Again. For what must have been the fourth time that day. After the compulsory joke about stalking, one of them explained that he was from the government and was telling people about the true price of pashmina. Actually, if it's real pashmina, it's 200$ or 500$. Yeah, nice try. So I just claimed that I had to skype my mum (sorry mum!) and made a beeline for the guesthouse.

And there I hid until the next day. I had an autorickshaw tour of the suburbs with Billu to be up for - and an Australian girl I met, Ella, offered to tag along too. A bit of company is always good, and it splits the fare: sorted.

Except Billu had sent along one of his drivers, rather than coming himself.

Damn. Billu had character. This guy most certainly didn't.

First, a vegetable market. Because every tour must include a token visit to some "local market", just to show that you're "experiencing the local culture" or something. 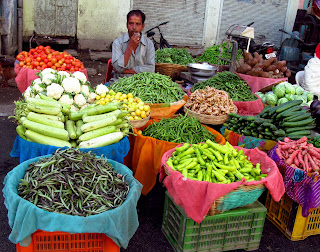 Or I presume that's why the big tour group were there too.

Very cultural, wandering around a market with a load of other foreigners.

Next were the cenotaphs. I love it when they just plonk a load of historical/religious/nice-looking objects into a space far too small for them, so I quite liked this part. Even if they were so off the beaten track that going inside involved stepping in bird poo. Barefoot, because this is a Hindu site.

Staring at things done (my concentration span is too short) I left. But first, I had to pay someone a camera fee. Oh yes, there's a sign that says photography is prohibited. I like to take photos of these. I will have to do a blogpost of them all at some point. 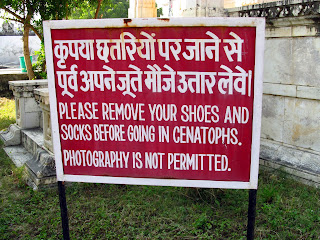 The driver seemed to think we'd spend about 3 hours at the two gardens he took us to next. Yeah, not much chance of that. And there are actually TOUR GUIDES in these gardens. I thought they should maybe consider alternative career paths, but then I actually saw some people taking a tour. In a park.

We only got held up by the usual "PHOTO! PHOTO!" call of the Indians. And apparently, white girls get small children given to them to hold. I'm glad they don't try to make me hold their babies.

Especially not the one who started kicking and screaming at the simple touch of white skin.

But we were back quickly enough to move on to whatever was coming up next. It was 11:40am, so not quite time for lunch.

And at that, we both nearly exploded.

No chance was he getting 500 rupees for this. Or any extra for taking us somewhere else to fill the 4 hours that were meant to be used for the tour.

But because we got a little angry, he took us to the artist's village.

Well, not sure what the Trade Descriptions Act would make of that, but there we go.

It was fairly dead.

The stone sculpture park was mildly amusing though. 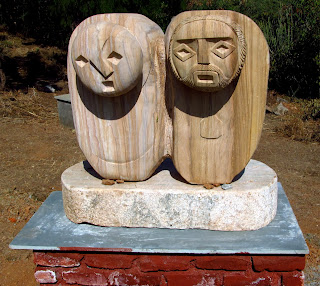 And my camera ran out of batteries halfway through. Apparently that doesn't qualify you for a 50% refund of the camera fee. Yes, I tried.

Actually, I don't think he understood, but yeah.

This very long and exhilarating tour over, it was time to return to the Lotus Cafe for more chicken. Chicken is important to us carnivorous types after all.

That done, time to rest and avoid the pashmina salesman who I told I'd come back to tomorrow. Given how many times he found me yesterday, that involved hiding inside and doing absolutely nothing, as I quite like to.

Time to escape over state borders.

Note: This blog is nowhere near in realtime, in fact it's about one month behind reality. Sorry for the delay! Please refer to the map on the right for current location - the furthest one in red away from home!
Posted by Anselm at 13:00