Ahmed is bad - and other bad geographically based jokes

I used to have a teacher who made geography jokes. I never thought I'd drop to her level.

Actually, thinking about it, it's not that much of a surprise.

So, next destination: Ahmedabad.

So obscure that most people haven't heard of it, and indeed asked why on earth I was going there.

To get to Hyderabad.

Hyder is bad? Water is bad? Nah, city of water. Like Ahmedabad is Ahmed's city.

Once I take back the Empire, I'll be all cultured and make Anselmabad the capital. Or something appropriate like that.
So, as usual, getting there is half the fun. There's a day train or night train down there - for some reason I decided to go for the night train. Even though it arrived at 4:30am. But this is no short trip - it's about 10 and a half hours. Departing at 17:45.

Someone didn't think this through.

If that wasn't bad enough, it was also a metre gauge line. Which meant the train shook from side to side excessively. For OVER 10 HOURS.

And I'd forgotten to get food beforehand. Normally, there's a pantry car on the train - but not on this train. Nor were there the usual assorted sellers - the line doesn't get enough traffic for that. So I had to get off at a (relatively) large station and sprint across to the small counter on the platform, joining the scrum of people shouting what they want at the poor guy behind it. Of course, this is India, and there is most certainly not a word for "queue" in Hindi.

No need for please and thankyou - this is India.

And I had some samosas. I really shouldn't - they upset the stomach - but there's nothing else on offer. Except for the usual choice of mediocre biscuits - that of course, I also bought.

Usually I wake up multiple times in the night because it's cold - or I wake up because some douche has forgotten that it's 3am and that making noise, playing rubbish music on their phone or turning the main light on disturbs people who might, strangely, be sleeping - and stay awake because it's cold.

But no, this is Gujarat - and it's warm at all hours of the day. I like these kinds of places. Apart from the fact I could never live in India - it's too crazy. 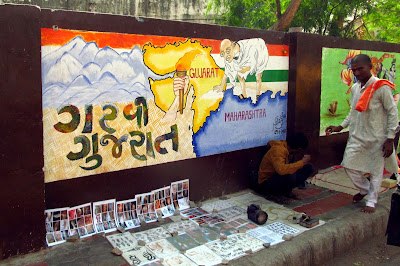 Unfortunately for me, the train arrived on time, and as per usual, some poor Indian had to wake me up, and answer my stupid questions, like "is this Ahmedabad?" and "we're on time?"

First time I've heard that phrase in a while.

So I went outside to be at the mercy of the other drivers. Who wouldn't use the meter. "Night fare, night fare".

Yeah, any excuse to charge me white man fare. I know how this works.

And please, stop trying to take me to another (expensive) hotel on whatever basis you claim. No, I'll pay 300 rupees a night for a room, thank you very much.

Given that it wasn't yet 5am, I had to wake up the poor kid to let me in. He seemed very confused that I was turning up, so I just paid for 2 nights instead, got into my room/prison cell, and fell asleep. The combination of the bouncy, shaking sleeper train, the samosas and the early start had, surprise surprise, made me feel a bit queasy.

And did the usual thing of having breakfast at about midday. But I couldn't find the non-veg place anywhere, so just found some eggs. Oh, and ice cream. Gujarati ice cream is renowned in India - and it's incredible. Appropriately, the best stuff is named Havmor. Yes, yes, I will.

I went for a wander as per usual, but this is in no way a tourist destination, and so it was a little bit difficult to actually find anything, given that I didn't do anything sensible like carry a map. Oops.

All I could work out is that the bazaar is massive. And that given that they don't really see tourists, I'm even more of a novelty (read: object of staring) than usual.

At least I don't have the constant "autorickshaw sir?" to put up with.

Just a load of market sellers who want photos. 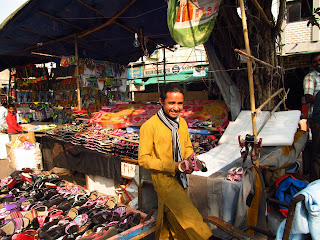 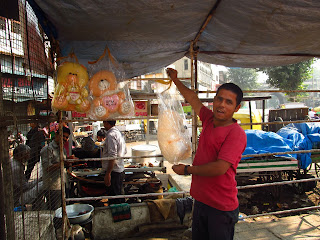 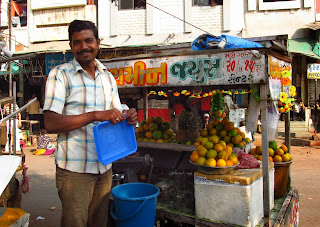 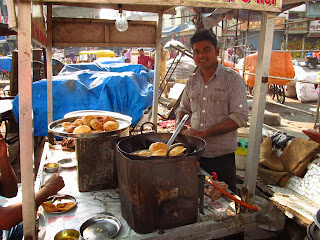 I have no idea what half of them are selling, but there we go. This is India. Real India.

But my wander had tired me out. I still hadn't recovered from that train journey - so I just went and slept, because I'm a fun guy like that.

I did my usual thing of waking up just before sunset, and discovered a restaurant with meat. And they didn't skimp on their servings of meat as they often do in this country - this was a proper meal. Definitely not going to get ill from enforced vegetarianism again.

Second day in Ahmedabad and I finally got outside at a somewhat decent time. Might be something to do with the 9am checkout; in fact, 9am is the "extended checkout". They like to rise early here. Strange people.

This early rising also extends to any city tours you can do - which might actually help here, given the total lack of tourist infrastructure and knowledge. But that involves getting to the other side of the city at 8:30am, which is pushing it a little too much.

So I relied on the Lonely Planet as per usual, which was suitably over-the-top in its recommendations.

They've really gone downhill since the BBC took over and tried to push them upmarket, or whatever they tried to do - there's a reason they lost so much money on it, and it's not just because of market trends. People actually enjoyed reading the old ones.

To give you an example: I found an old copy of the Wales Lonely Planet the other day. What else to do but look up what it says about my hometown, Newport? The first line was genuinely this:

Whether Newport's only a bit of a dump is questionable, but it made me crack up - which is never a good idea in a bookshop, but there you go. The old LPs have useful advice, and were written in a far better way - even if seemingly less professional. Shame that certain aspects get out of date. 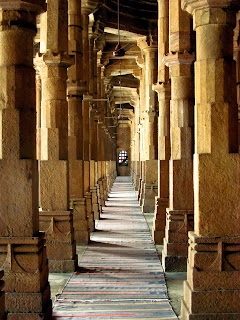 The Jama Masjid is really nice though - made of stone. And the guy inside who explained some of this to me didn't demand - or want - money. And there were actually other foreigners there - I presume the ones who were actually up at 8:30am. 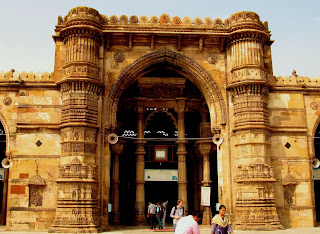 But having found one actual highlight, I went for a wander to find the others. Either they were so unimpressive that I didn't notice them, or I couldn't find them - but either way, I was lost, and autos actually use their meter here.

Which I can't pronounce properly, and so is very confusing for the locals.

We got there eventually.

It was closed. Because it was a Monday. How random.

OK, back to the hotel then. I can't think of anywhere else to go.

So off I wandered from there, across the river.

Then I saw it: a rotating tower. With a buffet. For a fiver. Not actually that cheap given that it's India, but I let the excitement of going up a tower get over me, and went for it. 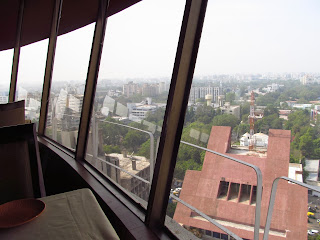 But I was ill, and to make it worse, the buffet was veg-only.

And it was a view of Ahmedabad - which is, to be frank, a distinctly average city.

So I counted down the hours until my flight, not wanting to potentially waste money on taking an autorickshaw to the more distant sights, given the quality of some of the other recommendations.

Eventually my flight was suitably close that I could justify taking the bus to the airport, and with much shouting, pointing and hand-waving later, I found the one that went there.

And maybe I should have actually hired the auto - there are some fairly nice sights a bit further out on the way to the airport. Which I didn't get any photos of, because I was trying to work out where to get off, and which one the "airport roundabout" was.

And I won't get any photos of, because I don't plan on coming back here unless I have to.

Turns out the airport roundabout was 2km away from the actual airport, and that taking an autorickshaw that distance would cost 3 times the bus fare.

He wanted 5 times the bus fare as well. Funny man.

Even if the bus fare was 10p. And even if I don't normally argue over 20p - but if they're petty, then I'll be petty.

Made it. The airport is far too civilised though. Aircon, electricity ports - and no staring. A bit weird really. Bit of a bubble.
And Indigo could teach Ryanair a few things. They give you a free 15kg baggage allowance for one - even though the fare is just £20 for a 2 hour flight. And despite the fact my bag was 17.5kg due to accumulated clutter (it was well under the allowance at the beginning) they didn't say anything - even though I was getting ready to wear 6 t-shirts at once and balance the wood carving on my head like a proper local.

Security didn't care about my flask being full of water either. Western airport security this is not. I only look like a drug trafficker, not a terrorist, as they seem to realise. I can't even grow a proper beard.

Airport food is overpriced though. Probably my fault for going for my first Subway in over a month, but for British prices it certainly wasn't British quality.

So it only seemed appropriate that I had one more Gujarati ice cream before I left.