So this has taken me a little while to get out. I apologise to the 3 people who read the blog (hi mum) but you'll see why later.

Istanbul was a lesson in not judging a place while you're tired and lost: it's actually really quite nice after a bit of sleep, even if the touts become a pain at times (that said, I'm writing this from Nepal, and the ones in Kathmandu are worse!). Having not appreciated the sunrise at all I eventually got out into the place well into the afternoon to have the standard wander round.
But Istanbul is actually quite hilly.

And cold at this time of year.

I was actually appropriately dressed to enter a mosque this time.

And there are lots of mosques. Which means that the call to prayer will be all over the shop, but mostly out of tune. Yes, they should definitely invest in autotune for the minarets. I'm sure some Albanian entrepreneur is on to it already.

Sod's law determined that I would get to the Blue Mosque at the time of prayers, and apparently pretending to be a Muslim doesn't work here. I bet they've heard it a few times before off similarly unimaginative people who also can't be bothered to wait a few minutes.

So having seen the sights, I escaped the tourists (they actually start carting them in for 8am here - why would you punish yourself that much when you're on holiday?! You only get some fool explaining why some nondescript fountain exists anyway!) and went to some places where I was a bit of a novelty. That's always good fun. And I forgot my jacket, which was a bit stupid of me.

But I went inside a mosque in the middle of nowhere. Note to self: you will get yelled at if you forget to take your shoes off, even if you don't actually make it off the steps and inside. Yes, I am still the Idiot Abroad.
I found a load of eateries in the Fatih district and just picked out a random one. Let them choose what they wanted to give me because I couldn't be bothered choosing myself. And they know better.

And apple tea is my new favourite thing. It's SO GOOD. Even if I didn't have a clue how long to leave it to brew. Major problem, eh?

At one point I wondered what this would cost, but no - I'm in some back street and they aren't going to take me to the cleaners. It cost probably half of what it would in a tourist district. Benefits of having a wander, eh?

Istanbul is still expensive though, even in the back streets.

And I still had a 9pm kebab. It's about all I can afford here, realistically.
So kebab in hand, I watched some guy stood outside the hostel (there's a restaurant attached to it) dance with 3 beers on his forehead. To Gangnam Style. Well, it was more of a wiggle than a dance, but there we go.

Oh wait, he's the owner, and those are the beers some table has ordered. Nice.

Then 2am came round. Chest pains, my throat hated me, and I had no idea what was going on, but it wasn't a lot of fun. So I forced myself back to sleep and ended up missing breakfast. I got up at 11, which was an hour after breakfast ended. And that was only because the clocks went back the night before.

So I bought some food. First of all I thought they were going to do it for free ("do you want something off the menu?") but no, of course not, this is Istanbul. Nothing is free here.

Turned out to be the most expensive breakfast I've ever had. Straight back out and I pretty much flushed 25 lira down the toilet. My apologies to the readers who are eating right now. At least you don't have chest pains.

Back to bed until 4pm.

Though the guy in the bed opposite was still pressing snooze on his alarm when I got up. Heavy night?

So I forced myself outside, despite the fact it was nearly sunset, having a corn-on-the-cob for a lira on the way. I made it down to the seafront, which is actually really nice, apart from people. Their very existence in front of me is annoying at times. 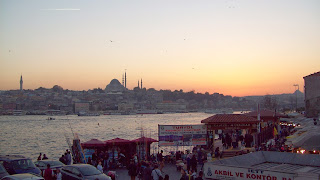 And eventually I got across the bridge and to the Tunel, the world's shortest metro. And despite being a mere 153m long, they still expect you to pay 4 lira for the privilege. In contrast, a standard metro ticket (token) is 3 lira. And you can go right across the city for that. No, these machines don't take tokens. Let's rip you off some more. Yes, thanks Istanbul.
You definitely can't ride without paying here either. Every tiny tram station has ticket barriers and an inspector.

Not that I ever ride without paying. Because I'm a law-abiding citizen foreigner, of course. Who respects the culture and economic situation of every country. Of course.

There's then a tram down to Taksim Square. It's a vintage tram. So they've decided that it's a tourist attraction, and the cheapest option is a 3-journey pass for 10 lira. No thanks, I'll walk there.
They definitely need fast and slow lanes for pedestrians on busy streets like this.

At least most of them realise that I'm foreign and don't try offering me Turkish leaflets.

No, your's is overpriced and rubbish. Leave me alone.

So it was time for a takeaway halfway along. I couldn't find the cheap food I'd been promised so I found a "Turkish pizza with meat" - so a kebab - for 11 lira that would do.

That they boxed, shrink-wrapped, and put in a canvas bag.

OK then. Bit posh for me maybe. But we'll live.

And I hadn't eaten all day. Well, I hadn't kept food down all day.

So I wandered up to Taksim Square and ate my overly posh food while failing to take long-exposure pictures with my camera. And there was a Routemaster there, so I acted the tourist and took photos. And confused them with my Welsh accent, which is always great fun.
Second day pretty much written off, I jumped on the tram (and actually got a seat - you what?) and went back. And then had to push my way off, because these things are always overcrowded. Haven't they heard of the concept of putting more trams on?

So final day in Istanbul, and about half of what I'd planned done, I thought I'd actually complete one day as planned. And so I got myself up at the far too normal hour of 8am, actually made it in time for breakfast, then headed down to the cruise ship booking office for a Bosphorus boat cruise for 9am.

Apparently I'd need to be there at 9 as there'd be a queue and it would sell out.

And definitely not sold out.

Come back at 10 and you can board. OK. Let's waste an hour. That's not too difficult.

So I withdrew a bit more cash (Istanbul and budgeting do not go together), bought myself a cheap leather jacket off the market in a subway (yes, this is Istanbul, and no, it probably isn't real leather) and got back to the dock.

9:40am and there was a massive queue outside the office, and quite a few were already waiting on the dock. So I joined them, knowing that if I wanted to actually see anything I better get a decent seat.

Which I just about did, after thinking I'd found a quicker way to the top deck but failing. Camera zoom comes in handy in times like this.

The boat docked at a small village just around the corner from the Black Sea, which was quite nice and did large amounts of seafood at the usual Istanbul (over)prices. I thought it actually made it to the Black Sea, which was half of the reason I took it, but the company have clearly decided that they can't be bothered to go another 20 minutes up there. 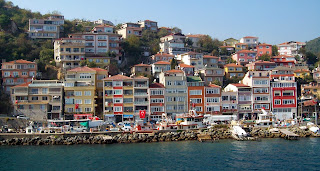 So I followed a crowd of people and ended up at the castle, from where I could see the Black Sea. Just about. Though my camera could have done with more zoom.

3 hours later and ready to go back.
OK, let's rush on and actually get a seat by the edge of the boat.

Apart from the fact that it was now bloody freezing up there, and most people went downstairs. But I'm proud to say that I braved the cold and stayed out there.
It was quite nice to get back to the hostel and do my usual act of squatting in the place that I'd just checked out of, and they even gave me an apple tea on the house.

And the owner balanced a plant pot on his head today. Legend. 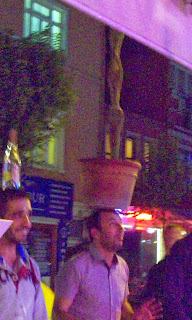 At some point I need to put the buzzwords they told me to put on Tripadvisor up. Good food, good wine (very much emphasised), friendly staff. Or something. But honestly, it is good food, if a bit expensive for the tight like myself.

I went for a minibus to the airport, which would pick me up from my hostel for 10€ and avoided the traipsing over to Taksim Square again. With my pack. For about 7€.

Then I decided that I couldn't be bothered sounding so stressed out and straight to the point, so I used the classic line "I'm crazy, want to join me on my trip?"

Which thankfully she laughed at, and stamped me out.

Maybe she just wanted to get rid of me. But my passport doesn't have any "do not allow re-entry to Turkey" endorsement, so it couldn't have been that bad.

Yes, noone escapes my small talk.

Then time for security, where I continued the night's theme of not doing too well.

I haven't set off the scanner in a while.

So out came the metal detector. My left buttock set it off.

I'd changed the batteries in my camera on the boat, and instead of throwing them in the Bosphorus, I'd put the old ones in my back pocket.

And batteries have metal in.

He took them, looked at them for a few seconds then gave them back to me.

No, I don't really want them, but OK.

So I used my last few liras on a Burger King, that classic Turkish meal, and my stomach did not appreciate it in the slightest.

On to the flight and my European leg is over. Time for the subcontinent!